The Avant-Garde for Beginners

My colleague Josh Corey has been temporarily felled by some dread illness, and I've just been told I'm going to be pressed into service tomorrow to cover a class session introducing the idea of the avant-garde.  Thank god I'm an old bastard, now, and have a general storehouse of notes on all literary topics.  I'll be bodging something together out of sections of two old essays of mine, "The Death of the Critic" (from Louis Armand's book Avant-Post, now viewable in its entirety online) and "The Avant-Garde in Babel," which appeared in Action Yes (you can find it online, along with the much-superior essay to which it responds).
I've cut down some passages and done some re-arranging of bits and pieces. Here, in the event you're interested, they are.

Modified Passages from "The Death of the Critic"


1. The Avant-Garde as Linguistic Skepticism
A classic definition of avant-gardism, one that seems to serve as a kind of accepted folk-wisdom among experimental poets in our time, was articulated by Renato Poggioli in his 1968 study The Theory of the Avant-Garde.  Poggioli’s idea of the avant-garde, which is essential but not sufficient for my purposes, proposes that avant-gardism proceeds from the assumption that languages and systems of expression are, by their nature, entropic.  Avant-garde writing is, in this view, an inevitable reaction to “the flat, opaque, and prosaic nature of our public speech, where the practical end of quantitative communication spoils the quality of the expressive means.”  For Poggioli, the “conventional habits” of expression in a bourgeois, capitalist society are subject to a “degeneration,” and the role of the avant-garde must be renewal.
This idea does not originate with Poggioli, but derives from a long tradition of thinking about experimental art, much of it from the era of the historical avant-garde itself.  Much of what Poggioli has to say, for example, was already present in Victor Shklovsky’s seminal article of 1917, “Art as Technique.”  Here, Shklovsky presents the problem of linguistic entropy as a problem of ever-decreasing experiential returns: “If we start to examine the general laws of perception,” he writes,
we see that as perception becomes habitual, it becomes automatic.  Thus, for example, all of our habits retreat into the area of the unconsciously automatic; if one remembers the sensations of holding a pen or speaking in a foreign language for the first time and compares that with his feeling at performing the action for the ten thousandth time, he will agree with us.
In this view, ordinary life in modern society is inherently a matter of alienation, not merely from one’s labor, but from one’s every action: “...life is reckoned as nothing.  Habitualization devours works, clothes, furniture, one’s wife, and the fear of war.”  If, as Shklovsky claims, “the purpose of art is to impart the sensation of things as they are perceived and not as they are known,” then the technique of art must be “to make objects unfamiliar, to make forms difficult, to increase the difficulty and length of perception...”
2. Historical Examples of Linguistic Skepticism Predating the Avant-Garde
One irony of Victor Shklovsky’s status as a kind of patron saint of the avant-garde is that the examples he chooses to illustrate his idea of art as the defamiliarization of experience are not drawn from the powerful currents of avant-garde practice that flowed through Russia in 1917. Instead, Shklovsky derives his most extended and convincing examples from classic nineteenth-century Russian writers such Tolstoy and Gogol.
Also, skepticism about language’s ability to remain fresh and retain meaning was already present in the late eighteenth century (ix), the period in which Schiller and Goethe wrote:
All dilettantes are plagiarizers. They sap the life out of and destroy all that is original and beautiful in language and in thought by repeating it, imitating it, and filling up their own void with it. Thus, more and more, language becomes filled up with pillaged phrases and forms that no longer say anything...
3. The Avant-Garde as Institutional Skepticism


Some thinkers hold that if the avant-garde is to be understood as something distinct from the artistic and literary traditions that preceded it, it must possess some quality or propose some project other than defamiliarization and linguistic regeneration.  Jochen Schulte-Sasse follows the Peter Bürger of Theory of the Avant-Garde when he maintains that this quality is to be found in the avant-garde’s questioning of the institutions of art.  Schulte-Sasse begins with the premise that the late-nineteenth century Aesthetic movement was predicated on notions of aesthetic disinterest and autonomy.  While the movement constituted a kind of critique of the bourgeois, utilitarian world, it was a dead-end in that it removed art from the world of power.  Art became otherworldly, incapable of intervening in civil society, and its critique of capitalist values became a matter of an impotent refusal rather than a force for active intervention.  As Schulte-Sasse puts it,
Aestheticism’s intensification of artistic autonomy and its effect on the foundation of a special realm of aesthetic experience permitted the avant-garde to clearly recognize the social inconsequentiality of autonomous art ...  For [Peter] Bürger, then, the development of the avant-garde has nothing to do with a critical consciousness about language… [F]or him the turning point from Aestheticism to the avant-garde is determined by the extent to which art comprehended the mode in which it functioned in bourgeois society, its comprehension of its own social status.  The historical avant-garde of the twenties was the first movement in art history that turned against the institution “art” and the mode in which autonomy functions.
The avant-garde, in this view, turned against the institutions of art (literary forms of publication, art galleries, museums, good taste and conniseurship, etc.) and the theory of art (autonomous art for art's sake) that underwrote those institutions.  It is in this respect, Schulte-Sasse says, that the avant-garde differed from Modernism:
Modernism may be understandable as an attack on traditional writing techniques, but the avant-garde can only be understood as an attack meant to alter the institutionalized commerce with art.  The social roles of the modernist and the avant-garde are, thus, radically different.
The carefully unpurchasable, deliberately unbeautiful nature of much avant-garde work can be taken as signs of the Bürger/Schulte-Sasse thesis in action.
A Passage Adapted from "The Avant-Garde in Babel"
The Bäckström Schema
The four or five terms for experimental art and literature that Per Bäckström refers to in his essay on the different forms of experimental art and literature in different national traditions are modernism, avant-gardism, vanguardia (and its variants in the different Romance languages), and postmodernism.
Bäckström sees modernism as a term used in the Germanic and Anglo-American traditions to indicate an aesthetically experimental kind of art that defines itself by its rejection of popular culture’s kitschiness and clichés.
The avant-garde, in the precise usage of German theorists like Peter Bürger, refers to a movement that combined aesthetic and political radicalism, seeking to regenerate life by eliminating the boundary between art and life.  In this view the avant-garde is less worried about maintaining a distance from popular culture than is modernism.
Although there has been much ink spilled in arguing over the definition of postmodernism, Bäckström finds its most useful definition to be one based on its complex relationship to modernism and popular culture.  Postmodernism contains within itself the formal experimentalism of modernism, but it also refutes modernism’s distaste for pop culture.
Vanguardia and its variants are terms from the Romance languages that refer to a range of experimental literary and artistic activity, including both anti-pop-cultural forms and politicized forms.
The overall field depicted would be that of artistic experimentalism in general, and one could plot the co-ordinates of the movements designated by the Bäckström’s terms thusly: 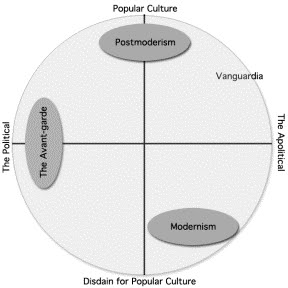