Names and the Pity of War: Here, Bullet 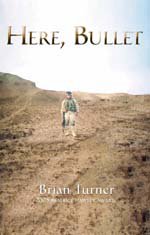 I think it was because I've been thinking about war poetry lately that Simone Muench suggested I check out Brian Turner's Here, Bullet, a book that's been getting a lot of high-profile press (New Yorker, New York Times,). I gave it a read during the interstices of the first teaching day of the new semester at Lake Forest, devouring bits between my two seminars, and finishing it on the train home. Although it isn't my usual thing, I can see why she suggested it. It is (pardon the pun) hit-and-miss, but it is a good example of how in war poetry so much of the poetry is, as Wilfred Owen said nearly a century ago, in the pity. And much of the pity, interestingly, comes it the use of proper names.

The poems are generally anecdotal, loosely put together, and usually depend on a kind of scene-setting over which an emotional sheen has been cast. Turner's also not above a few cliched forms of phrase, like ending a poem with the adjective-concrete noun-of-abstract noun formula. What's strong about Here, Bullet, though, is the emotion, which covers a range well outside the usual poem of backyard epiphany. The white-knuckle world of the American soldier in Iraq comes through loud and clear, as does the strangely unreal quality of the soldier's experience over there. As does the all-too-real nature of the violence. As does the existential absurdity of it all, as seemingly inexplicable acts of violence tear through the day, and friend/foe/bystander categories become muddied.

I'm intrigued by the way names come into all this. In contrast to poets like Randall Jarrell and Kevin Prufer, who deal with the dehumanizing nature of war by making their soldiers anonymous, Turner is hell-bent on keeping the people around him real, and making their tragedy specific, through using their proper names (that he does this for both Americans and Iraqis is especially laudible).

This is most effective when a name is incanted over and over, as in "AB Negative (The Surgeon's Poem)." In just over a page, we hear the name of the wounded protagonist five times, twice with both given- and surname: "Thalia Fields lies under a gray ceiling of clouds"; "Thalia / drifts in and out of consciousness"; "a nurse dabs her lips with a moist towel / her palm on Thalia's forehead"; "Thalia / sees shadows of people working / to save her"; "a way of dealing with the fact / that Thalia Fields is gone, long gone." The repeating of the name is redundant, grammatically, but syntactical efficiency isn't the point here, any more than it is in any chant or lament. Repetition is the faith Turner keeps with the dead.

Posted by Archambeau at 5:01 PM