What Went Down at Powell's North, or: Notes on Poetry Readings That Do Not Disappoint 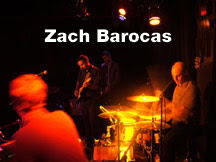 At least one of the elements that contributed to Zach's success isn't really tranferable: charisma. People like Zach, and he's confident and easygoing enough to pull off that delicate balancing act of simultaneously putting people at ease while impressing them. But not all of us are going to be former rock stars, (do drummers like Zach count as rock stars? Joe Doerr, another poet who toured internationally as a rocker, used to refer to drummers as "not musicians, exactly, but people who hang out with musicians...") (attention drum geeks: please direct your wrath at Joe, not me -- unless you happen to be Charlie Watts, in which case send your angry email to me and I'll have it framed, or maybe even cast in bronze).

Two other things about the reading at Powell's seem like good ideas that can be emulated elsewhere.

The first of these is a performace feature that I've seen elsewhere from time to time, and always liked: the featured poet reading work by other poets. This seems to work best when the work of the other isn't just offered up on a silver tray as a gesture of affiliation with Great Culture. Rather, it works best when the poems have some real, direct relation to the work of the poet doing the reading. Zach read poems by two poets — Pam Rehm and Graham Foust — who clearly have meant a lot to him. You could hear, too, the dialogue between their work and his, and sense his admiration, even love, of their work. I think this last bit about palpable admiration is important, because it helps to cut through one of the most baleful elements of the poetry reading as a performance genre: the inherent skew toward apparent egoism. The solo performer, up there by himself, reading work he wrote by himself, is the bread-and-butter of poetry readings, and no matter how saintly and selfless the poet may be, there's a tendency, induced by the very nature of the event, for the poet to look like a bit of a self-regarding creature (given the fact that many of us are in fact self-regarding creatures, the potential for the poet to look like something of a jerk is a bit high) (I think back on the first readings I gave with something of a shudder, and with gratitude for not being roughed-up by the crowd afterwards). So this was a good thing, Zach reading a few carefully chosen pieces by poets who had clearly meant a lot to him, and letting us see how their work had played into his own poetry.

The other good thing about the reading at Powell's was the inclusion of student readers (um... I mean "emerging writers") from nearby writing programs. Justin Palmer and Amira Hanafi, both writing students at th School of the Art Institute, served as opening acts, each reading a single piece (a shortish story in Justin's case, a long poem in Amira's). This was cool for a couple of reasons: firstly, it helpe to fight the Big Swaggering Ego bias built in to most poetry readings (regardless of the personality of the reader); and secondly, it helped create a different audience dynamic than is often the case.

One of the things I grumbled about in my post on poetry readings last summer was the disconnect between audience expectations and the things poetry readings often provided. Among other things, I cited the campus poetry reading as probematic because of the prevalence, in the audience, of students who had been dragooned into going as a class requirement or for extra credit. I'm not actually against this, and it can end up being a positive experience for students in many ways. It can even be the genesis for a lifelong love of poetry. But there's no surer way to suck the life out of something than to make it an administered requirement of some kind.

At Powell's there was a significant student element to the audience, but it wasn't a dragooned audience. It was, instead, a phenomenon I'd started noticing at many campus events (open mikes, choir concerts, etc.): students will turn up, of their own volition, to see their fellow students perform. So along with the usual Chicago poetry crowd (hey, O'Leary brothers -- good to see you there), and a music crowd from Zach's punk days, there was a whole crew present from the School of the Art Institute, many of whom, I think, wouldn't have made it to the reading if there hadn't been two students reading as well. In a way, the headliner-with-local-student-talent combo is symbiotic: Zach's presence lent prestige to Justin's and Amira's appearance, and put their work in front of an existing literary community; Justin and Amira brought in a crew who might not have made it otherwise. And it gets a student audience into an off-campus poetry reading, which helps further something that should be a part of any literary education: the cultivation of a sense that poetry isn't just something that comes on a syllabus.

It's important that this wasn't just the usual group reading, like the marathon at the MLA this year, since events like that don't bring different communities together so much as they give a venue to an existing community (I'd actually like to see a group reading that brought very different poetic communities together: Marc Smith and Charles Bernstein and Robert Pinsky and Geoffrey Hill and Margaret Atwood and Jimmy Santiago Baca, say -- I'd dislike individual parts, but it would be a hell of an interesting evening).

Powell's is sticking with this student-writer-as-opening-act format for at least this season. Next month one of Lake Forest's very own, Jessica Berger (on whose thesis committee I have proudly served) will open for a fiction reading by Steve Tomasula. If things go as well then as they did the other night, I think it will be safe to say that Powell's is on to something.

Amira Hanafi is an interesting poet, by the way. Judging by what she read, she's very much into what Robert Kelly used to call the "poetics of information." She read a piece about genetically modified foods, with some nice, subtle loopings back and forth between textual moments, and a clever way of showing how we are what we eat, which makes most Americans corn syrup of one sort or another. This beats the hell out of another confessional poem, another late-langpo disjunction fest, or another ghastly hybrid of the two, a combination that is surely the genetically modified hydrogenated corn syrup of contemporary poetry.

I've started using the "labels" function of this blog, which functions as a kind of an index. I'll be retrofitting old posts with labels slowly, though, so if the feature doesn't seem useful at the moment, give it some time. Sheesh, already, the impatience!