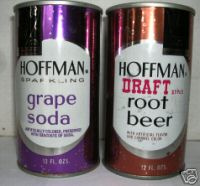 
The prettiest girl I ever saw
was sipping Hoffman's through a straw, give or take
a word.  Right from the can.


A tree grows from that can, in the nervous house
I live in, it's transparent as soda.


In a nearby city,
make that nearly.  Kids, it's nearly dinner.


That’s a poem by Michael Leddy, which we published in the old Samizdat magazine a dozen years go.  I really liked it then, and I really like it now.  I think I know why: you can read this one as casually or as intently as you want, and be happy with it either way.  Read intently, it makes for a very interesting set of propositions — about language, about poetic tradition, about the association of ideas in the stream of consciousness, and about the passage of time.
If you are the sort who thinks, with Wordsworth, that “we murder to dissect,” or who wants interpretive certainty, rather than the exploration of a set of interpretive possibilities invited by the text, you might want to go do something else instead of reading the rest of this post, which will just make you want to type an angry comment, perhaps in capital letters.
Okay then.  Let’s start at the beginning, which is to say, let’s start with some very traditional poetry, since the poem begins with rhyming iambics, slightly disguised because the second rhyme word isn’t at the end of a line, and because the metrics invite a little play in how one performs them:


We’ve got the full rhymes, and a scansion which is almost:


“Prettiest” is three syllables, of course, but depending on where you’re from, it’s likely to elide either a little or a lot, “prit-yest” being sort of clipped and Britsy, and “prit-ee-est” being flat-footed Nebraskan.  Take it any way that makes you happy.  I like to take it as a little stutter in the smoothness, thrown in there to make us conscious of what’s going on, and maybe to show us that Leddy doesn’t take the iambic line for granted.
Already there’s a lot here: the whole long tradition of iambic rhyming poetry about women, and about innocence, and about nostalgia, is all sort of packed in there, evoked suddenly and quickly.  And then something really cool happens.
With “give or take/a word”  we move from talking about the girl with the soda to talking about the representation of her in language.  She was sipping Hoffman’s soda “give or take a word,” a very odd statement, difficult, even impossible, to take literally.  I take this turn in the sentence, in all of it’s casualness, to make a statement something like “my poetic representation of the girl is close, but words distort, you know it and I know it — but let’s not make a big deal out of that, we can make communication work.”  I like the statement about language, and I really like the sudden elision from the girl to language, from memory to medium. The enjambed nature of the sentence, which leaves us hanging for a moment between “give or take” and “a word,” helps the shift from scene-painting to metalanguage come as a nice little surprise, I think.  And since the opening is so thoroughly, yet subtly, traditional, I like to take this little elision as making a kind of statement about the tradition of lyric poetry: that it distorts, but that, for the moment, we’re going to be okay with that.  This is what I’d call an interpretive possibility, held open by the text, but not as anything firmer than that.
And then suddenly, with “Right from the can,” we’re back in the little memory-scene, as if nothing had happened.  Except that we might not be.  That is, we might be back to seeing the girl sip from a straw that’s in a can, but the language is ambiguous, and possibly contradictory — we can take it to mean “the straw went into the can,” (though why would we need to hear that?) but we can also take it to mean “she was drinking from the can,” which would contradict the earlier statement about how she was drinking her soda from a straw.  Everything that seemed so accurate, right down to the obsolete, mid-Atlantic-specific brand of soda, is thrown into a bit of doubt.  But it doesn’t really cause any huge interpretive crisis, since so little is at stake, this being just a little memory.  We’re in the realm of  “language is wobbly, but workable,” the realm of “give or take a word.”
In the next stanza, we get something that looks a little surreal: “a tree grows in that can.”  It’s here that the title becomes important, because in a poem called “Brooklyn,” the phrase “a tree grows” brings to mind A Tree Grows in Brooklyn, the 1943 novel turned into a move by Elia Kazan two years later.  But so what?  So this, I think: firstly, we get a kind of Proust’s madeleine effect: Hoffman’s soda becomes evocative of a whole world of early 20th century New York immigrant struggle and perseverance (A Tree Grows in Brooklyn deals with Irish immigrants in the then-squalid tenements of Williamsburg), so there’s a kind of sense to the bizarre phrase “a tree grows in that can.”  But there’s more than that.  One of the main themes of A Tree Grows in Brooklyn is the importance of bending the truth: the protagonists can succeed only if they lie about where they live to get a child into a better school.  So the poem’s theme of the distortable nature of language is re-enforced here.
Another thing I like about the poem is how rapidly it starts to accumulate a little catalog of all the kinds of things a poem can do: it gives us meter and rhyme, and the tradition of the poem about the glimpsed but distant female, it gives us the tradition of nostalgia for innocence, it gives us metalanguage, and now it gives us intertextual allusion.  I especially like that the text to which it alludes is never named, and that it’s impossible to know if it is the movie or the book that is being invoked: this, again, adds to the “give or take a word” theme of language that distorts, but that’s good enough to work.  I mean, the allusion works whether it’s the movie or the book that comes to mind.
What about the whole couplet, though, beyond the subtle, oblique allusion?


A tree grows in that can, in the nervous house
I live in, it's transparent as soda.


A tree, it seems, grows in the nervous house in which the speaker lives.  It’s not an image that demands to be taken literally, especially not after the image of the tree growing in the can.  So let’s not take it literally.  Me, I like the notion of the tree being like the tree in Elia Kazan’s movie, which is a symbol of endurance despite travail.  Taking things this way, we move from the innocent world of the speaker’s memory, where he saw a girl drinking soda, to a more difficult, tense present world — but it’s not a desperate world, not entirely, there’s hope if, like the characters in the novel, one holds on and does one’s best.
This takes us as far as “the nervous house I live in,” but then there’s “it’s transparent as soda.”  Here again we’re in the realm of ambiguous or distorting language, the world of “give or take a word,” since the referent for the pronoun “it” is unclear: does it point us to the tree, or to the house?  If it’s the tree, then we could say that the hope that redeems the nervousness is invisible, is something not readily apparent.  But if “it” refers to the house, we’ve got a special kind of “nervous house,” one in which all of the nervous unhappinesses are on display to the world — as they would be in the tightly-packed tenement world of A Tree Grows in Brooklyn.  The issue is undecidable, as the old deconstructionists would say, and I like having it that way, which really means having it both ways, since both possibilities are suggested.  And, of course, the soda image brings us back to the girl and her world of innocence, so distant in tone from the fallen world in which the speaker now lives.
“In a nearby city” starts to launch us on a new narrative, moving us in space, but then there’s a little slip, moving from “nearby” to “nearly.”  I like that the speaker is correcting himself: he puts us once again into the world of approximation, the world of “give or take a word.”  And what follows shows us that we aren’t going to move in space, we’re going to move in time: to dinner time, in fact.  But the fact that the speaker now is clearly a father shows us that the real movement in time has been through decades, as the speaker grows up.  Hoffman’s soda hasn’t been around since the 60s, and this poem was written in early 2000, so we’ve gone from the childhood of the speaker to his adulthood.  His role has changed, and now he’s looking after his own children.  Which is wonderful for the poem, since when we begin with a memory of lost beauty and innocence and end with an adult who is accompanied by those who still experience the world innocently we’ve walked right into the heart of Romanticism, into Wordsworth’s “Tintern Abbey.”
What I really like about the poem is that it doesn’t just give us the life-cycle of the speaker, from youth to age.  It also gives us something like the poetic history from Romanticism to now: it gives us the rhyming, iambic, nostalgic invocation of innocence gone by — but then it gives us everything since Romanticism.  It gives us interpretive suggestion, rather than definiteness, such as we had in late nineteenth century symbolist poetry (“to suggest, that is the dream,” said Mallarmé), it gives us complex allusion, as the modernists did, and it gives us postmodern-style metalinguistic playfulness.  It’s a hell of a lot to put into an old soda can, but it fits.
You can find the poem, along with another little piece by Leddy, over at the still-incomplete Samizdat archive.
Posted by Archambeau at 7:17 PM 5 comments: