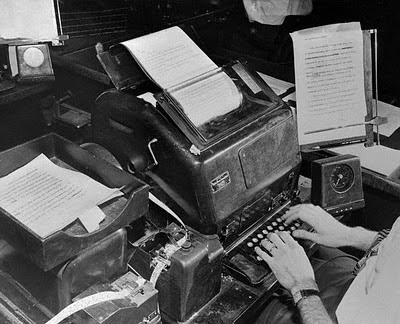 What’s that you say? What? You’ll have to speak up: I’m trying to set the Samizdat temporal distortion teletype to the 1860s, and I keep on grinding the gears in the transmission. It’s making a hell of a noise. So: what? Oh! You’ve been reading my post from last July, about how the line dividing poetry from prose shifted in the early nineteenth century, and hasn’t really shifted back. You poor, sad person. I mean, this is how you spend your time? But I remember that post. I think the important bit was this:

I think we can say that something changed in the way we answered the question "how is poetry different from prose" right around the beginning of the nineteenth century, and that, with some small modification, the new answer poets came up with at that time is still with us. This is Romanticism, people, nor are we out of it.

“Poetry is always different from prose,” writes Roland Barthes, in Writing Degree Zero but in the classical period “this difference is not one of essence, it is one of quantity. It does not, therefore, jeopardize the unity of language, which is an article of classical dogma.” In other words, the classical or Augustan writer doesn’t grant poetry one of the rights that we moderns and postmoderns grant it: the right to follow rules significantly different from those governing discursive prose. It is more or less the same stuff, but with the added use of particular literary devices such as rhyme and meter. Think about it: Alexander Pope's poem Essay on Man is more or less what it sounds like — a discursive, explanatory essay — it just happens to add versification. Even the title indicates a fundamental continuity between prose and poetry.

And then I sort of went on about how Coleridge saw poetry as involving a formal unity that was something an end in itself — that the poem was no longer paraphrasable, like prose. I think I quoted Colerdige’s essay on Shakespeare, where he said that in a true poem, the meaning cannot be paraphrased: “it would be scarcely more difficult to push a stone out from the pyramids with the bare hand than to alter a word, or the position of a word, in Milton or Shakespeare… without making the author say something else, or something worse."

The point I was trying to make was that the idea of poetry became a kind of autonomy: the poem couldn’t be put at the service of conveying a meaning, because it couldn’t be paraphrased. Also, the the poem couldn’t be bound by compositional rules (as prose is), since it makes its own rules and defines its own formal harmony. I went on with this for a while, and then argued that a lot of our own poetics are a minor deviation from the Romantic position — we argue that the poem is autonomous, free of formal rules and free of particular meaning, but we tend to say this has to do with its discontinuity and disunity, rather than with its unity.

So. Is that all you wanted to talk about? No? You say you want further elaboration? Ah! Well, I’ve just been able to set the Samizdat temporal dislocation teletype to 1864. Unless it pops out of gear, we should be able to get some kind of Victorian feedback. Let’s see. Ah! We’ve got Gerard Manley Hopkins on the line. Let me check the tickertape for what he has to say…

Okay. So it looks like he sees poetry as falling into several different categories. “First and highest,” he says, there’s “poetry proper, the language of inspiration.” Set against this is something called Parnassian poetry. This is lesser stuff, and not inspired. “In a poet’s particular kind of Parnassian lies most of his style, of his manner, of his mannerism, if you like.” Each poet will have a different idiom, but it is the simple fact that it is his or her idiom, the recognizable stock-in-trade kind of line in the oeuvre, that makes it Parnassian. It’s different from “poetry proper” because it seems to follow the author’s own rules of ordinary composition (think of Wordsworth’s meditative line, or Ashbery’s phrases-bumping-together, or Milton’s sublimity and inverted syntax, or what have you). “I believe that when a poet palls on us it is because of his Parnassian. We seem to have found out his secret,” or, in other words, his implicit system, his rules of composition — no matter how weird or arcane, we discover that “his poetry really does run in an intelligibly laid down path.”

This Parnassian mode is still better (because idiosyncratic) than what Hopkins calls the merely Delphic, which is simply plainspoken language put into verse. But true poetry, for Hopkins, eludes rules, even idiosyncratic ones. It stands free, autonomous, above explanation, as inspiration. What’s really interesting is (to borrow from and modify Barthes’ terms) the hyperdiscontinuity of language we find in Hopkins’ poetics. For him, it’s not just that real poetry is different from prose: it’s that real poetry is different from most of what we call poetry. I suppose we could see in this an intensification of the Romantic sense of poetry as distinct from prose by virtue of its various kinds of autonomy.

(We probably like to think we’re beyond such mystifications as the idea of inspired language, but an enormous amount of the writing about poetry now falls into a variant of this kind of thinking — it argues that poetry is beyond instrumentalism, disruptive of the rules of discourse, etc. So we’re walking down the same road walked by Coleridge, and later Hopkins. But I digress.)

Oh hell. The Samizdat teletype seems to have popped out of gear. Let me see if I can get it back…argh…ugh. Nope. Now it’s stuck in the 1840s. We’ll probably end up getting a transmission from Frederick William Faber or Caroline Clive or some other B-lister. Oh! Wait! We’ve got Edgar Allan Poe. Let me type in a question for him: “Hi Ed stop what makes a poem a poem stop just wondering stop Bob stop.” Wait for it… ah! The reply. He says he’s happy to discuss “the essentiality of what we call Poetry,” but we’ve got to be careful of what we mean:

…here, in the beginning, permit me to say a few words in regard to a somewhat peculiar principle, which, whether rightfully or wrongfully, has always had its influence in my own critical estimate of the poem. I hold that a long poem does not exist. I maintain that the phrase, "a long poem," is simply a flat contradiction in terms.

I need scarcely observe that a poem deserves its title only inasmuch as it excites, by elevating the soul. The value of the poem is in the ratio of this elevating excitement. But all excitements are, through a psychal necessity, transient. That degree of excitement which would entitle a poem to be so called at all, cannot be sustained throughout a composition of any great length. After the lapse of half an hour, at the very utmost, it flags- fails- a revulsion ensues- and then the poem is, in effect and in fact, no longer such.

Okay. No one ever said Poe would be entirely coherent. I mean, he starts out talking about how a poem can’t be long, but then shifts on the fly to talking about how a reader can’t be attentive for long, which is a slightly different thing. Still and all, we get the general drift, and it’s a drift not too different from that of Hopkins: poetry is not like most other language. In fact, since the bulk of most long poems isn’t really poetry, real poetry isn’t like much of what passes under the name of poetry. There’s a real discontinuity between poetry and prose, and between poetry and much of what we call poetry.

But there’s more! It’s not just the case that poetry is defined by that post-Augustan discontinuity of language Barthes described: it’s also the case that poetry is autonomous. It’s free, for Poe, of any need to communicate any particular content, and exists as an end in itself. He begins by attacking anyone who sees a didactic use for poetry, then makes his point about autonomy:

It has been assumed, tacitly and avowedly, directly and indirectly, that the ultimate object of all Poetry is Truth. Every poem, it is said, should inculcate a moral, and by this moral is the poetical merit of the work to be adjudged. We Americans especially have patronized this happy idea, and we Bostonians very especially have developed it in full. We have taken it into our heads that to write a poem simply for the poem's sake, and to acknowledge such to have been our design, would be to confess ourselves radically wanting in the true poetic dignity and force: but the simple fact is that would we but permit ourselves to look into our own souls we should immediately there discover that under the sun there neither exists nor can exist any work more thoroughly dignified, more supremely noble, than this very poem, this poem per se, this poem which is a poem and nothing more, this poem written solely for the poem's sake.

So there it is: the old Romantic line about autonomy and the discontinuity of language passes straight through the middle decades of the nineteenth century before arriving at the New Critical phase of the “heresy of paraphrase,” and then morphing into the “disjunction is poetic” world of elliptical poetry.

But I seem to have spilled my milkshake into the Samizdat temporal distortion teletype, and lost the connection to Poe. In fact, I seem to have gummed up the works pretty badly. I doubt we’ll be using the gizmo again.