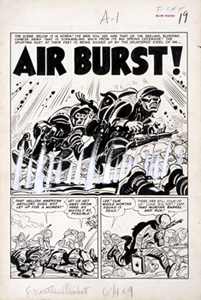 I don’t remember much about the war comics I read as a kid, in part because I didn’t read them the way I read Tintin or Asterix (obsessively, slowly, repeatedly).  I couldn’t read them that way, because they weren’t mine: they belonged to the kids whose family had a little cabin next to my family’s weekend place on a lake a couple of hours into the enormous conifer and rock-outcrop forest of the Canadian Shield.  The Reichert kids were older than I was, and had lived in England for a while, and kept a stash of English and American war and horror comics in a back room of the cabin, and sometimes, when our family was visiting theirs, I’d sneak into that back room and hurriedly read through a comic or two with a flashlight.

The horror comics were a mistake: I’d always rush home and try to forget about the terrifying images by reading Asterix, but it never did any good, and I’d wake up in the middle of the night convinced that the sound of the wind in the branches could only be the wailing of corpses risen from the grave.  But the war comics were fascinating: full of guys punching out heavily armed enemies with nothing but the oversized knuckles on their spectacularly rendered fists, or jackbooted Nazis and commies marching in lockstep against our side’s ragtag bands of can-do misfits.  I do remember one exception: a grim tale of a Vietnam veteran returned home after a bad injury in the jungle, only to face social rejection, unemployment, a girlfriend who’d left him while he was away at war, and finally a crippling drug addiction.  In the end, he tries to commit suicide, but when he pulls the trigger of his old service revolver, nothing happens, and a mysterious man appears to explain that he can’t take such an easy way out: he died in the jungle, and this America to which he’d returned is hell.  But by and large the pages of Nick Fury and His Howling Commandos, Smash! and Sgt. Rock took a more gung-ho tack.

This early experience of 1970s war comics conditioned my expectations when Michael Robbins pulled a nicely produced hardcover of Corpse on the Imjin! And Other Stories by Harvey Kurtzman from his courier bag and passed it to me in the departmental lounge one evening (he’d written a review of the book for The Chicago Tribune).  Kurtzman wrote—and, frequently, illustrated—many issues of the EC comics Two-Fisted Tales and Frontline Combat during the 1950s, and I expected to find simple jingoism like I’d seen in the comics I’d read growing up.  I mean, these were comics about war during a time when America was at war in Korea, when Cold War propaganda was picturing a red under every bed, and before we’d had the hard national disillusion of Vietnam.  But instead, I found something rather different.  Perhaps because Kurtzman had been a soldier himself during the Second World War (though not a combat infantryman), his stories tend to be defined by two characteristics: an acute sense of the suffering of all soldiers; and a sense of the essential irony of war.  That is: the soldiers in his stories aren’t the sort who’d shout “go get ‘em, boys!” and charge down an enemy machine gun nest.  Rather, they’re people whose boots aren’t good enough for the journey, who hunger, who are plagued by fear and lack of sleep and more fear and by naïve courage that lasts exactly up to the point of first contact with the enemy.  Which is also exactly as long as the best-laid plans of officers lasts: armies plan, in Kurtzman’s stories, and the gods of war laugh.  More often than not, soldiers are caught in their own traps, or by their own illusions.  And it’s not just minor characters who perish: protagonists die, sometimes quickly, sometimes alone and in pain.  At least one critic, Ng Suat Tong, writing for Comics Journal, has complained that Kurtzman presented war as “gentle, dignified, and bloodlessly pleasant”—to be perfectly honest, I do not know how he could experience Kurtzman’s stories, in which we watch corpses float down rivers, see the laboriously built homes of innocent farmers destroyed by mere chance, and witness the slaughter of P.O.W.s by their captors, in this light.  If this is dignity and pleasantness, I shudder to think of indignity and pain.

There are, to be fair, occasional moments where we hear the false note of jingoism —“America is a way of life... and as long as we believe in good we can’t go wrong!” But generally Kurtzman is better than that, even in a format that openly panders to the audience’s prejudices (the last panel of many stories consists of a little message like “That’s it readers!  Did you enjoy this magazine?  Your letters give us an idea of what you like to read so won’t you please write us and tell us what you liked and why!”).

What’s most interesting is the sympathetic treatment Kurtzman gives to the Chinese and North Korean experience of the war, in comics for an American market published during the war itself.  Although Kurtzman doesn’t get into the political issues behind the war, he does treat the ethics of individual combatants, and in doing so he refuses to elevate the Americans above their Chinese and Korean opponents: both are shown as capable of dehumanizing their enemies, both are capable of great loyalty to their fellow soldiers, and of self-sacrifice, not for some abstract cause, but for the other guys in the unit, in the hopes of getting everyone back home safely.

One story, “Air Burst!” is told from the point of view of Chinese soldiers in a dangerous retreat after a failed offensive, and they are treated with exactly the same level of sympathy one sees in Kurtzman’s stories about American G.I.s.  Unlike the faceless German soldiers of Sgt. Rock, these guys have nicknames, they carry each other when wounded, they’re individuated, with some being kinder or more skilled than others, they suffer from terror during shelling by Americans, and, like the Kurtzman’s G.I.s, their fates can be ironic—in the end, one is killed by the trap his squad set to slow the American pursuit of their retreat.  Here, we've moved beyond the sympathetic to the empathetic, in that we don't just feel for the Chinese soldiers, we feel through them, are asked to see through their eyes and feel what they feel.  We become them, to the degree that we become Jane Eyre or Huck Finn or any other protagonist with whose plight a story asks us to identify.

Or almost.  There's one major stumbling block to our identification with Kurtzman's Chinese soldiers: the way he represents their speech.  Kurtzman's American G.I.s speak as realistically as he could make them, given the anti-profanity restrictions placed on publications by the Comics Code Authority.  But his Chinese soldiers, for all their humanity, speak a stilted, formalized version of English.  "Let us pause a moment" one will say, "Why do you stop, Lee?" another will ask. Then an airstrike that would have caused one of Kurtzman's Americans to shout "hit the deck!" makes a Chinese soldier call out "fall to the ground!" and then "we shall give the Americans a taste of shrapnel."  Seeing an American observation plane, another soldier calls out "he circles us!" and "let us run!"— you get the idea: no slang, no contractions, the kind of thing the writers of Star Trek did when writing for Spock or Data.  The idea seems to be to present the Chinese characters as exotic, and this interferes with the attempt to give us their experience and their point of view, since they are exotic only to us, not to themselves.  If they come across as exotic, we are taken out of their lived experience, and reminded of their otherness.  We are no longer fully experiencing their point of view.

The easiest thing to do would be to dismiss this as a kind of failure of imagination on Kurtzman's part, but the more I think about Kurtzman's representation of Chinese speech, the more I can see a point to it.  In fact, it has some of the characteristics most admired in postmodern translation theory.


That is, some translations seek to appear as if they were written in the new language: to make a version of Goethe, say, that seems like a work originally written in English.  This is the most commonly held sense of what a good translation looks like, and I confess that I've often thought of good translation in these terms.  When, for example, I read a translation from the French that stays too close to the Latinate side of English, using "submarine rock formations" rather than "underwater rock formations" for the French "formations rocheuses sous-marines," I tend to sneer at this as a bit prissy.  But there's another kind of translation, one that aims to retain the sense that the translated work was written in another language—this is Foucault's "projectile" translation.

The late Antoine Berman, one of the most influential and controversial translation theorists of the last thirty years, elaborated on this second kind of translation in an essay called "Translation and the Trials of the Foreign" (the title comes from Heidegger's discussion of Hölderlin's strange translations from the Greek).  Here, Berman describes a type of translation that maintains a strong sense of the original language's difference from our own tongue, and aims "to open up the foreign work to us in its utter foreignness" by "accentuating its strangeness," which is, paradoxically, the only real way of "giving us access" to the foreign text as such, that is, as a foreign text.  The idea is to maintain a sense of strangeness in the translation, thereby preventing the reader from erasing the real, existing otherness of the original text itself.

Kurtzman, of course, isn't translating anything—he, not a Chinese author, wrote 'Air Strike!" and he wrote it in English.  But the representation of Chinese speech as a marked English, as something other than idiomatic, native-speaker stuff, may be taken as an attempt to maintain for us a sense that the people he is depicting are not simply Westerners with slightly different bodies: they come from another culture, and speak another language, and his representation of their speech keeps this always in front of us.

There's a case to be made against this kind of speech representation.  When I see pop-culture depictions of Native Americans, and they speak a kind of hyper-formal, dignified, contraction-free, unslangy English, I always rankle a bit, because it seems like this involves a flattening out of the emotional and expressive range of the characters.  They're not talking like the Cree and Blackfoot kids I knew growing up in western Canada, kids who were capable of wackiness, low diction, fast-talk, and as full a range of human affect as you or I.  But if Berman is to be believed, there's also a case for a kind of speech representation that marks difference as difference, that refuses to allow us to forget the foreignness of the foreign.  If we proceed on Berman's assumptions, then we can see "Air Strike!" as a combination of a Chinese point of view—inviting empathy—with speech effects that remind us that the empathy we're feeling is an empathy that stretches across cultural divisions.  And that's a subtle move—far subtler than many of us have been willing to attribute to something in the often maligned form of the old-school comic book.