The Poets as Professors 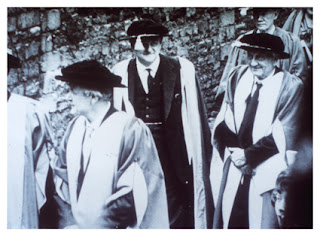 Maybe it's because I've been hanging out with Ray Bianchi lately that I've been thinking a bit about the en masse movement of the poets into professorial robes. Ray's a poet but not an academic, which makes him two things at once: A. the historical norm for poets; and B. an aberration among the poets of early 21st century America, for whom "professor" is almost certainly the single most common job-description. Ray's been ruminating over this situation, and I suppose listening to him do this over lunch the other day at a local joint has got me chewing things over a bit, too.

It's not that I've got a Romantic sense of the poet as glamorous outsider. In fact, one of the things being a prof has done for me is to give me enough of a historical sense to know that the poet as outsider, free from any attachment to institutions, is only a brief chapter in the history of poetry. For most of the history of poetry in English, the bulk of poets have been affiliated with one or another kind of institution. It could be courtly (Edmund Spenser, say, or Wyatt) or eccesiastical (the later Donne, or George Herbert), or it could be a matter of sub-courtly aristocratic patronage, or the odd, eighteenth century combination of patronage and incipient market-oriented publishing (Pope and Johnson). To a degree, the Romantics really were knocked loose from institutional support by the disruption of the old patronage system and the rapid development of forms of writing more commercially viable than poetry. The situation continued for much of the nineteenth century, despite prominent exceptions. But by the early decades of the twentieth century a lot of poets had found support through affiliation with journalism, and after World War Two the migration into academe was on. Now, with the MFA mills running into overtime shifts, we're probably close to the zenith of the poet-as-professor era. With the huge overproduction of credentialled poets, after all, we're going to have more of them than can possibly find academic, or even para-academic, work. The whole process feels vaguely dialectical, but I've descended too far down the declining side of my caffeine curve to follow up on all that just now (no doubt to the relief of all concerned).

Anyway, I think I've found an angle from which to approach the question of what the migration into academe may mean for poetry. It comes from an essay called "The Review: Culture's Medium" in the very-academic sounding collectionThe Cambridge Companion to British Romanticism. The essay was written by my favorite Romanticist this side of Jerome McGann, Marilyn Butler. Butler's essay is, essentially, an examination of the role of the various cultural reviews of the late eighteenth and early nineteenth centuries in influencing the way poets and novelists saw themselves. Because Butler is fiendishly clever, she blows right on by the commonplace notion that the reviewers for these journals were in a position to praise or blame various kinds of poets. Her topic, she says, is "Reviews rather than reviewing." That is, she's interested in how the format of journals, and the kind of discourse they represent, influence literature. It isn't individual book reviews she cares about, it's the conditions of communication that the journals created that matter to her. (I believe my colleagues in Communications have a term for this, but Dave Park hasn't returned my phone message yet, damn him, so I'm going to have to do without it).

Long story short, Butler's argument goes something like this:

1. The important journals of the late eighteenth-century and early nineteenth-century (Butler is far too sophisticated to write as if there were firm start-and-stop traits for these things, but I'm not above a rough handling of delicate materials) treated literature in the context of various social and political ideas and events. The journals reviewed literature along with works on other issues, and often treated works of literature from a socio-political standpoint. Importantly, writers responded to this treatment, and tended to see themselves as part of a general public sphere in which large social and political issues were discussed in generally accessible terms. My favorite example here involves not poetry but the novels of Walter Scott and Maria Edgeworth. Butler tells us "most late eighteenth-century novels were viewed as entertainments and as fodder for the female reader," but journals like The Edinburgh Review and The Quarterly Review, in treating literature along with Adam Smith-ish political economy, created new horizons of literary expectation. Butler writes:

The Edgeworth family took both quarterlies, Scott wrote for both of them: between 1809 and 1914 Maria Edgeworth and Scott "turned" novels to documentation and social realism and into that discourse of contemporary history and social analysis to which the serious nineteenth-century novel belongs. Edgeworth's Ennui (1809) and The Absentee (1812), the best-received of her Irish tales, appeared at just the right time to win accolades from both quarterlies. Naturally so, for these tales mirror the qualites and contents of the higher journalism. Firmly grounded in the science of society, they are composed in vivid, accurately observed scenes that seem to invite selection as quotations — that is, virtually to anticipate a second career in the columns of either quarterly....[T]he nonfictional elements that make ... Edgeworth so newsworthy, so much at home in these periodicals devoted to the public scene, repeat themselves in Scott. Both novelists echo the quarterlies' commitment to social order and government.

So the journals in which literature was reviewed created a climate to which the writers responded. Writers, seeing their works treated in the context of social debate, came to see themselves as participants in that debate, and wrote accordingly.

2. As the nineteenth century rumbled along, many journals that reviewed literature became more specifically literary. That is, they became more interested in literature, and less interested in the broader issues of political economy that had formed the main concerns of the earlier journals. 1820 seems to be the watershed date: "An ordered separation between literature, especially poetry, and independent or reformist or scientific thinking was in train by 1820" writes Butler. She demonstrates this in many ways, but the most striking example for me was the change in the kinds of people who were profiled in biographical essays in the journals:

What's interesting about all this to me, as I think about the migration of the poets into the English departments, is this: if, as Butler convincingly argues, the context in which literature is presented and discussed has an effect on the way writers see themselves, and the way they write, we can expect the academization of poets to have far-reaching consequences for poetry. The inclusion of poetry in a more general cultural discourse leads to certain results; and one imagines the limiting of poetry to specifically literary contexts — as has happened in our own time — will lead to very different results. I don't have anything like the scholarly data set required to make a proper statement about these consequences, but don't think for a moment that this is going to stop me from opining.

So what's our situation, exactly? Well, it is a situation where an unprecedented number of poets teach in English departments; and just as importantly, it is a situation in which poets publish, for the most part, in journals devoted only to literature. It is also a situation where poetry is reviewed and discussed primarily in literary journals. There are exceptions, of course, to this publishing situation. There are journals that place poetry and discussions of poetry alongside more general material (think of The New Yorker, say, or the Times Literary Supplement) but the percentage of published poems appearing in such venues is minimal. And what are the effects of this situation? Well, for starters, I'd offer these two:

1. Style über alles. If poets are affiliated with literary institutions such as English departments (as opposed to institutions of power, say, like the court of a Wyatt or a Spenser), it is the most specifically literary element of literature that we can expect to see at center stage. We can expect poets to claim prestige by stylistic affiliation, choosing either classic old-school forms or the newest-and-most-advanced forms as means of establishing cultural capital. You can just about hear the distant rumble of canon-fire from a battle between New Formalism and Language Poetry, can't you?

2. Sentimental politics rather than politics of a more hands-on variety. Academics tend to have pretty thought-out political opinions. But we don't tend to, you know, do much, except maybe cut a check to the Green Party and go to a demonstration near the campus cafeteria. I'm not against this, but it isn't the same thing as union organizing. I mean, there's a real difference between Charles Bernstein telling us "as a poet, you effect the public sphere with each reader, with the fact of the poem, and by exercising your prerogative to choose what collective forms you will legitimate" and Carl Sandburg (a poet of the poet-as-newspaperman era) working to organize for the Wisconsin Social Democratic Party, back when such organizing had very tangible consequences (like winning elections, or getting your head knocked in by a billy club).

I don't want to present our current situation as a kind of fall from grace. Nor do I mean to imply that we've reached the final state of things. In fact, Ron Silliman has pointed to two trends that seem to me to point toward the end of the era of the dominance of the poet-professor: the production of poets by the universities on a scale such that only a very small percentage of them can go back to the universities as professors; and the rise of the blogosphere as a venue for the publication and discussion of poetry.

It's too soon to say what these trends will mean. But it seems likely that the poet-professors, while not actually decreasing in numbers, will soon enough be overwhelmed by new breeds. And they (or, I should say, we) will stand agape, like a cluster of old genteel Yankees of the early twentieth-century gawking with incomprehension at the strangely-garbed crowds pouring through Ellis Island. 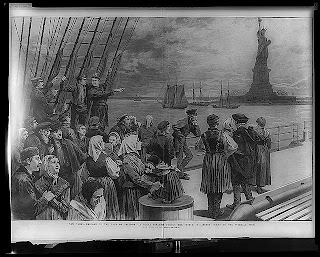 Posted by Archambeau at 9:04 AM No comments: