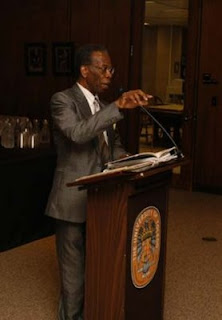 So there I was, furtively engaged in that most shameful of activities — doing an online search for my own name. Since my dad has the same name I do, this often turns into some kind pseudo-Freudian Oedipal deal: I go searching for myself, and find my father. Usually (yeah, I do this often enough to say "usually" — oh, the shame) that doesn't happen if I add the word "poetry" to the search, but this time it did: I found a reference to a poem dedicated to my dad back in the late 50s. When I followed up on all this in the special collections room at Northwestern, I found a sharp, careful little poem with great scansion by Herbert W. Martin. Turns out Martin was a pal of my dad's back when they were students in Ohio, and I'm very glad to have (albeit belatedly) discovered his work:

When Adam and Eve were born
He sighed a rose, she breathed a thorn.

Autumn wild, vermillion tumult
Where strumpet in rage is caught.

Winter, hardest of all to bear
Where virgin-snow and moon stare.

I've been checking into Martin's work since finding this, and it's a pretty impressive record: several volumes of poetry, a stint in the downtown New York scene in the sixties, collaborations with composers, and a one-man show performing the works of Paul Lawrence Dunbar. He also gives a great lecture on the African-American oral tradition which (appropriately) we can listen to online.

Posted by Archambeau at 10:44 AM No comments: