Trojan Horses in the Republic of Theory 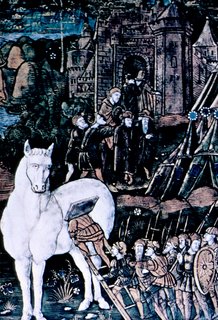 Back when I was an obnoxious, dismissive, egomanaical dipshit of a grad student, I used to love hanging out in the O'Shaughnessy Hall coffee shop at Notre Dame (where I was once brushed aside by John Favreau during the filming of Rudy).

Somewhere between my third cup of coffee and my second or third rant about [insert name of whatever guys with ponytails were ranting about in the mid nineties] [no, I don't have the ponytail anymore], I'd probably opine thusly about whatever poet had recently visited campus: "Oh sure, [insert name of poet] is good at what he attempts, but the poems, you have to admit..." (here I would pause portentiously, and gaze at whoever hadn't quietly slipped away from the table) "...the poems are inadequately researched." At this point I would lean back in the smoky air and feel smugly superior for a moment before steering myself toward the sandwich tray.

Oyez. Already I was a big fan of contingent difficulty in poetry, of the notion that the poet who isn't trafficking in the long ago or far away or arcane or weird was missing out on everything important. I've mellowed in my premature dotage, no doubt, and one feature of this mellowing is to note that I was (rightly or wrongly) out of step with the times. The movement that was already gestating back then, and that has since come to fruition, wasn't toward the researched poem, but the theorized poem.

A number of people have been talking about this new state of affairs, in which the poet is almost expected to write a kind of poetics. The phenomenon is interesting and can, I think, be explained as the result of several trends converging. It has all sorts of implications for poets, but also for poetics. In fact, I think it has a chance of changing the way the theory of literature is written.

Joshua Clover has turned his gaze onto this state of affairs, writing that there is now a kind of presumption out there that:

...poets should have theorized their own work explicitly and completely as a necessary supplement to the poetry, without which it can't be trusted or read as such .... the relative success and insight of recent poetics in making theoretical accounts of itself that are at once persuasive, and relevant to poetics in general, has perhaps produced a certain set of expectations. Certainly there is a rise in general in the sense that poetry is well-accompanied by the author's "poetics," as seen in, for example ... the increasing footage given over to critical writing by the poets in the back of the Norton Anthologies.

Mark Scroggins picks up the discussion and notes that there's an institutional dimesion to it:

I'm interested in how this has been institutionalized, how the writing of poetics – often quite apart from any engagement with "theory" in the sense that the term is most often used in the academy, but nonetheless drawing on the etymological sense of "theory," to look at with detachment – is being written into the requirements for creative writing programs. One can see this in the web pages of various CW programs around the country, which have begun requiring "theory" and "poetics" courses, and some sort of "poetics" component to their theses & dissertations. Even Our University has instituted a self-reflexive "poetics" moment into the requirements for the MFA .... I'd agree with Joshua that this is straight-up "academicization," the final downfall of the old "workshop"/"atelier" model of teaching writing, which can now look only wistfully back on its origins as an artificial imitation of the buzzing café or the intense mardi, where the young gathered – voluntarily, with no grades assigned, no registrar involved...

There's a lot of evidence for the Clover-Scroggins hypothesis -- from immediate personal experience, I offer the following:

Oosh. It leaves me feeling clammy and vaguely violated to remember it, though I'm not exactly sure why.

Oh wait, I think I do know why: the eager self-abasement of the life of the mind before the idol of the marketplace. Yeah, that's probably it. I'm mandarin enough to get queasy when I see it.

Thesis: The English Departments of the 1980s and 1990s (high theory by theorists)
Antithesis: The MFA Programs of the same period ("craft"-oriented workshop model for poets)
Synthesis: Us, now (poetics by poets)

Okay, right. So what happens to poetics when it is taken out of the hands of, say, Aristotle or more contemporary straight-up theorist types and put in the hands of poets? Lots of things. But one of the more interesting is this: we start to more of the formal techniques we associate with "creative" or "literary" writing in the theory. I mean, when guys like Benjamin Friedlander write extended pastiches and present them as criticism, or when Gabriel Gudding writes highly-wrought, deadpan-funny, alliterative, Jakobson's poetic-function having essays on poetics, something interesting is going on. Poetics are getting (forgive me for this) poetic (Brooke Bergan rates a mention here: her "How MiMi Got (Presque Ou Peut-Etre) Postmodern" in Vectors is a tour de force of poetic technique in the creation of poetics).

If form signifies (as it does), all this will change theory. After Plato chucked the poets out of the ideal republic for their emotional appeal and their freewheeling approach to the word, he said he'd be glad to let them back in if they could write a proper defense of poetry — in prose. In writing poetics that employ the literary techniques we associate more with poetry than with discursive prose, there's a kind of smuggling of the poetic back inside the walls of the republic of theory.

Allrighty, then. Having spent the afternoon expounding on the contradictions of feminine desire in the Victorian novel, I'm off to see if I can scare up the ingredients for one of these.

Posted by Archambeau at 9:20 PM No comments: