Something to Say and a Way of Saying It: John Matthias' Kedging 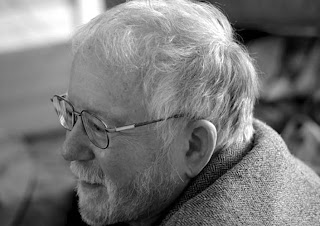 Hot news, folks: there's a new book out by John Matthias. It's called Kedging, which (for any of you unfortunate enough not to have served, however briefly and/or ingloriously, under the banner of Her Majesty's Royal Canadian Naval Reserve) refers to the process by which a ship is moved in the least convenient manner possible: by carrying the anchor out from the ship in a boat, dropping it, then hauling the ship laboriously up to where it landed.

I'm not sure whether Matthias intends this as a way of describing his technique or not, but I do know that the naval reference makes sense, in that Matthias' subject matter here includes family history with the Royal Navy. There's also the usual wide array of material, including ekphrastic poetry, poems about music, those wonderful poems where Matthias' personal history opens up into cultural history, and much more besides. Call it investigative poetics, or late/new modernism — in a scene where vague elliptical meandering seems to have become the stock in trade for most poets, Matthias continues to come across with the two things contemporary poetry needs the most. They are (in the words of a TLS review of an earlier Matthias volume) "something to say and a way of saying it."

Posted by Archambeau at 3:13 PM No comments: