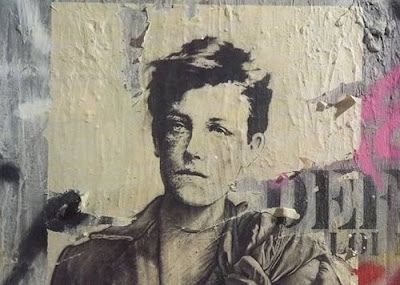 I've been working on an essay about Rimbaud and, as always, taking more notes than necessary. Here are a few of them...

The hagiographic quality of the French commentaries on Rimbaud can be overwhelming. If the French ever found the bullet with which Verlaine shot Rimbaud in the wrist, they'd put it in Lourdes and use it to heal the lame.

In 1901 a Belgian book-lover discovered all 500 copies of Une Saison en Enfer in the storeroom of the printer Rimbaud had hired 28 years earlier. Rimbaud, it seems, had never paid the man.

Rimbaud never tried to publish Illuminations: it was his former lover Verlaine who got it into print, long after Rimbaud departed for Africa. At the time, Verlaine thought it was a posthumous publication.

Whatever else you can say about Rimbaud, he was not a careerist.

Mallarmé said that Rimbaud "amputated himself" from poetry. It makes you wonder: what did Mallarmé amputate himself from by staying a poet?

I, like everyone else, really want the "Adieu" at the end of Une Saison en Enfer to be the last bit of poetry Rimbaud wrote, but the chronology remains muddled. It's probable some of the Illuminations came afterwards. Rimbaud is as inconsiderate of others in chronology as he was in everything else.

I don't think we can underestimate the role France's national humiliation in the Franco-Prussian war of 1870 played in setting the mood for Rimbaud's poetry. The "Mauvais Sang" or "Bad Blood" section of Une Saison en Enfer revels in the idea of the French as a debased people. The self-doubt of a defeated nation becomes an opportunity for Rimbaud to undermine one of the pillars of bourgeois morality: pride in nation.

Everyone who writes about Rimbaud has an opinion about the statement "Je est un autre" ("I is another"), But for me the real interest lies in a related statement, "C'est faut de dire: Je pense: on devrait dire on me pense" ("It's wrong to say I think: one should say I am thought").

I could find only one truly first-rate gloss on the passage, by the great Geneva-school phenomenologist Georges Poulet. For him, "I am thought" (meaning something like "something thinks me," not "I am composed of thought") can be paraphrased as an undoing of the Cartesian "I think, therefore I am." Poulet: "I am, I do not doubt my existence, nor do I doubt that it is personal, or that the way in which I apprehend it is not equally personal. I am, and feel myself to be, living. But this being that I am and of which I am conscious, is dependent upon a power I cannot reasonably attribute to myself. My effort to think myself can only lead me to situate, somewhere back of me, a determining power of which I am the passive subject and about which I am at a loss to speak."

It's in the context of these ideas that "Je est un autre" takes on fuller resonance. Against this powerful sense of being formed by forces beyond one's control, "Je est un autre" can mean (again, in Poulet's words) "I can think myself other than I am or was."

It's freedom Rimbaud is after, but he's always after it the way a prisoner is, when he dreams of escape. Rimbaud feels the constraints of family, school, career, and religion, and satirizes them brutally in his earliest poetry. But what does escape look like? Sometimes it's a dream of a return to childhood (think of "Le Bateau Ivre," in which the only boat he cares for is the toy one launched by a child in a cold black puddle) and sometimes it's a dream of dissolving, and being swept away into nothingness (think of another part of "Le Bateau Ivre," where he dreams of the storms tearing his ship apart). Sometimes, too, it's a desire to transcend the limits of existence by having more than one life ("It seems to me we are owed other lives," he wrote in Une Saison en Enfer).

Robert Baker, in his wonderful study The Extravagant: Crossings of Modern Poetry and Philosophy gets at the nature of Rimbaud's escapism when he writes "At one extreme of his experience, Rimbaud explores theatrical, expressive, metaphoric multiplications of himself... while at another extreme he evokes a kind of translation of the self into the sweep of light."