The Kafka Sutra: On Amazon and Live at the Grolier Poetry Bookshop

Hot news! The Amazon listing for my new book of poems and literary oddities, The Kafka Sutra is now up and running.  Just in time for the launch of the book, along with two other new titles from MadHat Press, tomorrow at the Grolier  Poetry Bookshop in Cambridge, Mass.

Here's the text from the Amazon listing:


What if Franz Kafka, that master of frustration, failure, and despair, had written the ancient Sanskrit sex manual The Kama Sutra? Robert Archambeau explores this question in the illustrated series of parables that begins his collection The Kafka Sutra. Other questions behind the pieces in this book concern glam rock, fatherhood, Afro-Caribbean and Belgian Surrealism, Conceptualism, Hiroshima, the sad lot of the English professor, and similar vital matters of these, our troubled times.


And here's my severed head, advertising the book launch.  See you there! 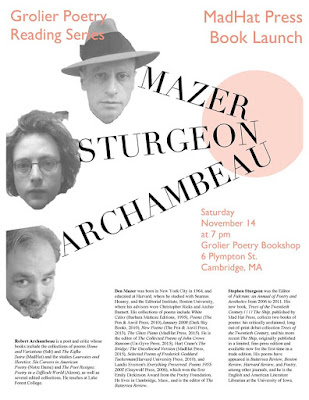 Posted by Archambeau at 9:06 AM No comments:

Email ThisBlogThis!Share to TwitterShare to FacebookShare to Pinterest
Labels: announcements, The Kafka Sutra

Tennis Court Oaths: France and the Making of John Ashbery

Hot news! The glorious new issue of Prelude magazine is out in print and online.  It includes many fine things, (new work by Rae Armantrout, Felix Bernstein, Anne Tardos, Katy Lederer, Rusty Morrison, and Kaveh Akbar, and—oh boy oh boy oh boy—Anthony Madrid on rhyme in Wallace Stevens, just for starters), and an essay of mine called "Tennis Court Oaths: France and the Making of John Ashbery."  The essay takes a look at how a decade in France shaped Ashbery's poetics (his isolation mattered, and his exposure to the French literary tradition).  It also looks at how the triumph of French theory in American literature departments back in the day prepared those departments to appreciate, and canonize, Ashbery.  The essay is online here, and starts like this:

“I regret,” intoned the solemn-eyed boy, climbing the steps of the school where he attended kindergarten, “these stairs.” Many years later, when the boy had become perhaps the most lauded poet in America, he would tell an interviewer that he’d had no idea what the word “regret” meant back then, but it seemed resonant to him. What is more, by saying the word he discovered that he did, somehow, regret those stairs. Language delighted him without having to be useful, and language held the key to unexpected truths. Small wonder, then, that four years after he declared his regret, the boy would fixate on a Life magazine feature on Surrealism, the first mass media treatment of that movement in America. Poring over images of Réne Magritte’s art and a description of André Breton’s automatic writing, the young Ashbery declared himself a Surrealist at once. The moment is, to the best of my knowledge, Ashbery’s first profound encounter with French culture. And it is France that made Ashbery—that made his poetry what it is, and made, in a roundabout way, his American reputation.

Posted by Archambeau at 11:06 AM No comments:

The Meeting That Saved Modernism

You're probably wondering how San Francisco streetcar consolidation in the 1890s helped make modernism happen, and speculating on how much of the legendary Paris of the 1920s would have disappeared if Michael Stein, Gertrude's older brother, hadn't shaken railroad magnate Collis Potter Huntington's hand firmly and without perspiration.  Find out in a short essay I wrote for Partisan, "The Meeting that Saved Modernism," available online!
Posted by Archambeau at 12:05 PM No comments:

Good news for those interested in the state of poetry criticism: there's a feature on that very topic just now available in the latest issue of The Battersea Review.  It includes contributions by...

...and my own contribution, "The Work of Criticism in the Age of Mechanical Recommendation"

As usual, The Battersea Review feels like a great party, with all sorts of guests.  Outside of the symposium on criticism, the focus of the current issue is on French-language writing, and there's too much to list, but as a longtime lover of all things Tintin, let me point to Alexandra Kulik's piece on the life of Tintin's creator Hergé, "Tintin and the Well of Dissatisfaction."