Around Zukofsky Ending in Hass 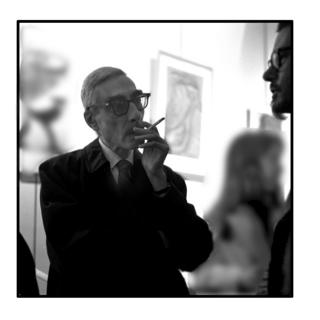 Pawing through one of my notebooks I see that it's been two months since the "Around Zukofsky" conference held at the University of Chicago to commemorate the 100th anniversary of Louis Zukofsky's birth. It was an interesting event, at least the part I saw -- not only for what was said about Zukofsky, but for what the whole event said about how we academic types talk about poetry.

I was stuck in Lake Forest for the morning, and took the train down to Hyde Park late, watching the green awnings over jewelry stores and banks on the north shore give way to "Support Our Troops" signs and flag stickers on the north side of the city and down in the loop, and then change to "Bush Lies, Who Dies?" and "No War" graffitti around the university. When I finally made it to the Franke Center (an odd corner of the Regenstein Library), I'd missed some of the more formal panels, and found a roundtable discussion in progress.

Some bright things were said, but the way many of the questions from the audience were phrased was all too familiar from the conferences I'd attended in the past. It's as if admittance to graduate school forces one to say "problematic" (as a noun) or "positionality" when what one really means is "problem" or "position." Sometimes it seems as if conference speech by graduate students is governed by fear -- the fear that one might be understood, say, and questioned about what one has said. Or the fear that one will have to admit to having not read a text. Or the fear that one doesn't belong to the tribe, that one must establish one's bona fides with certain code words. Maybe this is a function of the Maslowian hierarchy of needs -- sure, your average grad student or untenured faculty person has food and shelter, the basic needs, but she's still working on safety and belonging, the next tiers up. And language reflects these anxieties, I suppose. Suppose? Hey. I've been there (grad student, untenured prof), and I'm sure I'd blanche at a tape of the kind of questions I asked at conference panels in the early 90s...

Not everything was like this, though. I remember how Bob Hass asked a question or two in perfectly clear English and how, on the way out, I heard a couple of grad school types mooning over the beauty of the poet's speech. He had simply spoken lucidly, and been unafraid to ask a question that revealed that there was something he didn't know. I imagine his ease with such a simple task had to do with the security that comes from having won all the laurels one can win in these unceremonious times.

My favorite moment came when a man in the audience raised his hand, cleared his throat, and asked a most unusual question for a context like the one in which we found ourselves. "I don't want to sound too much like I'm channeling Harold Bloom," he said, "But -- honestly -- does anyone up there think that Louis Zukofsky was really a -great- poet, whatever that may mean?" As he sat back I watched the panelists look around at each other. It was as if they had served a tennis ball over the net to their opponents, got in position for the return, but what came back over the net wasn't a ball but a bandicoot. It was a kind of violation of decorum, and revealed the limits of our discourse about poetry. We're pretty good at ideological analysis, we know what to do with questions of historical context, we're pretty happy with placing a guy like Zukovsky in some kind of affirmative relationship with fashionable poets or critical notions of our time (he anticipates language poetry, we'll say, or he links ethics and aesthetics). But we just don't -do- evaluative criticism well, or at all. We tend to find the very notion a bit embarassing. And the man who'd raised his hand had set that wild-eyed bandicoot loose in the room. How to chase it back into its cage?

The panelists finally chased the bandicoot with what struck me as some surprisingly old fashioned implements. One spoke of Zukofsky's potential greatness as a matter of his influence -- if enough people followed him, then he was, in a manner of speaking, great. Another spoke of a "diachronic cultural dynamic" that, when one thought about it, amounted to the test of time. None of this would have been alien to, say, David Hume. I'm not busting on the bandicoot-catchers here: I'm just surprised at how powerfully the question revealed a weakness of our critical discourse. We don't seem to have done a whole lot of new thinking about how to evaluate a poet. It was Jed Rasula, I think, who had the best answer of the lot, a kind of hermenutic one --he maintained that Zukofsky's greatness would be determined by how much of an interpretive community could be formed around his works.

The questioner, I later discovered, was Richard Strier, whom many of you may know as a John Donne guy. He seems to have a reputation for cutting through the clutter of academic speech, as this page by an admiring student makes clear: "Richard Strier, Destroyer of Bullshit" http://home.uchicago.edy/~nacecire/strier.html .

A brisk walk over to Classics with Strier and Hass, and then the conference's grand finale, a reading by Hass, mostly of new poems.

I didn't think it was possible to make a smooth transition from Zukofsky to Hass, but Srikanth Reddy did it, in one of the best introductions to a poetry reading I've ever seen. He read a poem of his own that he'd written for the occasion, a really lovely piece full of Hass-like lists and image-fragments, the sort of thing that reminded you of the imagist roots of some of Hass' best poems, and established the Hass-Zukofsky link through a poetry of the image. Lovely stuff.

Hass' own reading was strong, mostly of new things, most of which tread the boundary between image and statement, as many of his poems in the past have done. One new piece was different, though, consisting of a kind of breezy New York School talkiness, a story-and-dialogue based piece in which he talks to a waiter who turns out to live in a John Ashbery poem, where he'd best stay to avoid being sent off to war. Fascinating as a departure for Hass, and wonderful in all the balls it managed to juggle: campiness, admiration for a fellow poet, concern with the darker events of our time, the nature of reality in literature, and so much more.

But what I really liked was the visual that accompanied all this: Hass bent intently over his page, while Srikanth Reddy sat on one side and Oren Izenberg of Chicago's English Department on the other (Reddy was up front as the introducer, Izenberg had arrived late and sat by the door at the front of the room). Reddy, in a really exquisite green shirt, sat with his profile to the crowd, chin on his hand and elbows on his knees, rapt, beatific, with a smile like the Budhha on the cover of the New Directions edition of Siddhartha (does that sound orientalist? I'd been reading Hesse on the train down, not Siddhartha but Steppenwolf, but I guess there was some image bleedover). "Transported," I thought. "He looks transported." On Hass' other side, a kind of bookend counterpart, Izenberg stared intently over his glasses, flourished what looked like a rather expensive pen, and took notes with severe strokes on a legal pad. He didn't seem to blink more than once or twice through the whole reading, and the dome of his head radiated about 400 degrees of intellectual heat -- the critical intellect on at full blast. The two were like figures for the emotional and intellectual sides of poetry, balanced like angel and devil over the shoulders of the poet.

I wonder just how much may have been, at some level, conscious pose: Reddy comes from the creative writing wing of our poetry world, and Izenberg from the critical theory end of things. We all give off some version of the impression we want to give off, especially when at a Big Event and at the front of the room. It may be that each was in his own movie, one playing the rapt poet and one the skeptical critic. I was in the audience next to Jed Rasula, trying my damndest to play a hip version of The Last Liberal Humanist, a role I had in my high school musical one year and never quite shook. 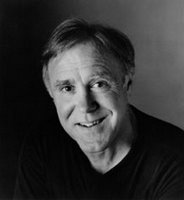 Talking, after the reading, with Eirick Steinhoff about the Chicago Review and Jed Rasula about Auden and others about other things. For that, for the image of Reddy and Izenberg, for the question about Zukofsky's greatness, for a bit of banter with Strier and Hass between buildings, and for the chance to give Mark Scroggins a copy of my book (I'd liked his so much, I wanted to give him something back), I was grateful to the conference organizers for putting it all together, and glad I'd gotten my act together enough to come down to Hyde Park and be a part of the background noise. Academic conferences -- as an old prof once said when welcoming a new colleague, "there is life in the intersitces of the institution."

Posted by Archambeau at 1:44 PM