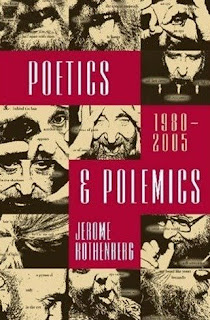 Mere moments ago I braved the Chicago cold to retrieve a copy of Jerome Rothenberg's latest book, Poetics & Polemics: 1980-2005 from my mailbox, where it landed with a thud almost as satisfying, if somewhat less in the basso profundo range, as that made when the third volume of the Rothenberg & Joris-edited anthology Poems for the Millennium arrived a few days ago [*update/correction: the new volume in the series is edited by Rothenberg and Jeffrey Robinson, as Jerry has just reminded me]. Jerry was kind enough to send a copy of Poetics and Polemics my way, probably because it includes an interview with him I ran in the old Samizdat magazine in 2001. That issue was dedicated to celebrating the second volume of the Rothenberg/Joris anthology, and to their years-long creative collaboration (most, but not all, of the content is up online). Anyway, it seems like a good time to revisit the Rothenberg/Joris project, so here's the introduction I wrote to the special issue some eight years ago:

A year or two before the first volume of Jerome Rothenberg and Pierre Joris’ seminal anthology Poems for the Millennium appeared in 1995, I was sitting in a seminar room at the University of Notre Dame, wondering what John Matthias was going to say about the three books he’d arrayed on the table in front of him. “What does one do with something like this?” he said, hefting an enormous reference book that listed the names and addresses of thousands of American poets. “I suppose you could drop it on something that needed flattening.”

Here was poetry unsorted and unmapped, explained Matthias, here was a gathering of poets about whom no editorial choices had been made. “This isn’t much better,” he said, picking up the second book, nearly as large. It was the Norton Anthology of Modern Poetry. An anthology that tried to be all things to all people all the time, he explained, ended up being nothing much at all. One could root around in it for individual poems, but the book itself made no statement. As bland as a committee-authored document from the federal budget department, and about as informative when it came to the state of poetry.

The third book still lay on the table, rather old and conspicuously thinner. Squinting a little from where I sat, I could just make out the title: Quest for Reality: An Anthology of Short Poems in English, edited by Yvor Winters and Ken Fields. “Then there’s the opposite extreme,” Matthias said, brandishing the book, which was slimmer than the novels I’d been reading on the train ride out from Chicago to South Bend. “Here’s what Winters thought of as the real tradition, pared down to this little gathering.” Matthias, I knew, was no Wintersian–he was one of Winters’ renegade students–and his own taste in poetry was among the most catholic of anyone I’d met. But he’d used Winters’ narrow little book effectively to make his point: anthologists need to make principled choices if their books are going to have anything to say about poetry, its past or its future.

At first glance, you might think the two volumes of Poems for the Millennium fall into the same formless category as the Norton Anthology. Together they add up to a similar page count, and their presence on a bookshelf is far more imposing. But after you steel yourself for a long swim, dive into the anthology, and surface at the far shore, you emerge with a clear sense of the organizing principle–one could even say the mission–of Rothenberg and Joris’ great editorial project. The principle, in a word, is awakening: awakening to the possibilities of language, of experiment, of what Mallarmé called the “freed word.” Awakening, above all, to the usable pasts of modernist and postmodernist innovation.

In their introduction to the second volume, Rothenberg and Joris lament the dark days following the second world war. It was as a time in which the poetic energy of the prewar years had been drained away by the institutionalization of a tamed and truncated version of modernism. These years witnessed “an ascendant literary ‘modernism’–hostile to experiment and reduced in consequence to a vapid, often stuffy middle-ground approximation.” There was a willful forgetting of the openness of modernism, and a turn to “a fixed notion of poetry and poem, which might be improved upon but was never questioned at the root.” The task of poets coming of age in the fifties and sixties, argue Rothenberg and Joris, was to find what had been lost, to revive the electrical energy of the force that had crackled through poetry at the beginning of the century. They call the fulfillment of this task “the second great awakening of poetry,” and the second volume of their anthology is an archive of that awakening.

In our own time the discourse about poetry, if not poetry itself, seems to have suffered through a taming and truncation of possibilities similar to the one Rothenberg and Joris saw in the years after World War II. I don’t think we’re about to see anyone offering as narrow a version of poetry as Winters offered in his little anthology. But the easy division of poetry into mainstream and otherstream, into Iowa school and Buffalo school, into confession and langpo, has become stifling. The two party version of poetry is about as satisfying and representative as the two party version of politics. In this context, Rothenberg and Joris’ archive of poetry’s two great awakenings in the last century has a special importance. In its pages lie the usable pasts of a third great awakening of poetry.

I think I can stand by most of what I said back then, except for the penultimate paragraph. For one thing, the notion of an Iowa/Buffalo dichotomy seems dated. And the discourse about poetry has really changed in the past eight years, too, a development that has everything to do with the blogosphere and the migration of critical discussion online. Where we once had a culture of quarterly journal review pages consisting of nine parts logrolling and one part snark, and an incipient email list culture made up of nine parts snark and one part logrolling, we're now seeing more discussion, conducted more variously, than ever before. The blogospheric ambience may not be a match for that of the Parisian cafés of the '20s, but the talk about poetry has never been better.

In other news, I think I'm officially the last person in the world to join Facebook. I'm hoping it doesn't take up all my time: I've got a big anthology to get through. 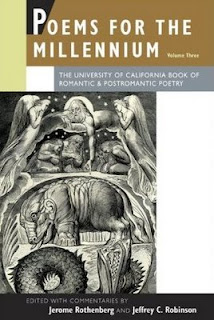 Posted by Archambeau at 1:03 PM No comments: