What Ever Happened to Gore Vidal? 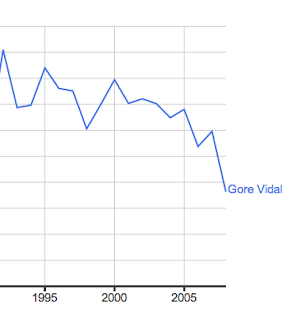 You know what would really bother Gore Vidal, were he living today? A lot of things—the persistence of homophobia, say, or the banality of the mass media, or the continued overextension of a haplessly imperial America. But what would bother him even more would be the fact that the question "what ever happened to Gore Vidal?" is a reasonable one to ask. He loved many things, but chief among them was the idea of himself as a famous, public man, suave, sly, smarter than anyone else in the room, and with absolute faith that he (as author, as prophet, as charismatic icon) would be vindicated by history.  Of course he hasn't disappeared: if you read and you're of a certain age, you do know his name. But he's fading fast from both public consciousness and the literary canon, and it's fair to ask why.

Vidal's was certainly a copious literary talent, and while I've read ten or twelve of his books, that really only scratches the surface of the oeuvre, which was both vast and various: from political essays to satires of politics, media, and society, to sensitive coming of age novels, to historical fiction, to plays for screen and stage, to the bare-fisted yet elegant pummeling of opponents in political debate, his range was as great as his ambition, and nearly as great as his considerable charm, and equally considerable ego. One of the most popular serious writers of his generation, and one of its more memorable media figures, he seemed, during his lifetime, to have wedged himself firmly into the culture, a figure to be remembered for posterity.  And yet, if you plug his name into Google's ngram reader, you'll see a precipitous plunge in mentions of his name in print.  And if you gather up the syllabi for courses in American literature—the great wax museums in which we commemorate the literary dead—he rarely appears. So we ask: what happened?

One explanation may be that our institutions of cultural memory, especially our academic ones, tend to value innovation. The inventors and pioneers of literature get a special place, and are forgiven many of their shortcomings. We don't (at least, I hope we don't) read Ezra Pound for his analyses of society, except perhaps to treat his views on those matters as symptoms of a grim time when democracy was in such deep crisis that fascism seemed, to a surprising number of people, like a kind of solution. We read Pound in large measure because he was an innovator, a writer of manifesti, a shaper of movements, one who pushed against the margins of accepted form. Imagism, Vorticism, a new way to build a long poem—that's the Pound of the syllabi. And for all of Vidal's evident talent, all of his range, it's hard to find something he accomplished that didn't derive from what others had written.  His Julian is a sensitive treatment of late Roman antiquity, but if you've read Robert Graves, you can't help feeling that you've seen this sort of thing done before, and better, by someone who knew the period better than did Vidal.  Vidal's political fiction, especially Washington, D.C. owes quite a bit to Robert Penn Warren's All the King's Men, in outlook and in structure. Williwaw  is a decent young man's novel about coming of age in a time of war, but it comes out of a well-established playbook for such novels. Even his most far-out fiction, the transsexual eros and power festival that is Myra Breckenridge, which the public didn't see coming and couldn't get over, is less of a surprise if you've read, say, the then-semi-clandestine works published by Olympia Press.

Another factor in the decline of Vidal's renown has to do with genre. The bulk of his achievement as a novelist was in historical fiction, and English departments, a generation or so of democratizing moves notwithstanding, still draw a strong distinction, in practice, between high-genre forms of fiction and low-genre forms—historical fiction is low caste stuff. Not as low caste as crime writing or swords & sorcery, but still pretty low on the totem pole, below the novel of manners, say. It's one reason why Jane Austen is on so many more syllabi than Sir Walter Scott, even though he was arguably the leading novelist of his generation.

There is, too, the suffragette factor to consider. When we move away from Vidal's historical fiction, it's books like Myra Breckenridge and its sequel, Myron that made the biggest splash in Vidal's lifetime—and much of that splash had to do with leaping into the seemingly calm pool of gender norms with an enthusiastic cannonball dive. The fluidity of gender and of bodies in those books, and the exploration of the intersection of sex and power, were things rarely seen in the public eye, and he put them there, on the page and on the screen. This was an enormous act of liberation.  But the thing about the sexual revolution, and the queer revolution, and all revolutions that achieve a large measure of success, is that their success makes them seem somewhat banal to later generations. It's hard to get young people enthused about the idea of the suffragettes, or even to get them to declare themselves to be feminists, even though they live lives and hold beliefs that would not have been possible without the work of those heroes of the struggle. When Myra Breckenridge came out in 1968, it was one of a handful of publicly accessible sources for genderqueer ideas and representations. Now, thirty seconds on the internet will give you access to a wider range of genders and sexualities than Vidal could possibly cram into that book's pages. Vidal was certainly an important part of the expansion of the public palette when it comes to sexuality, but the very success of the movement of which he was a part renders his contribution less visible.

Finally, we may want to consider the nature of Vidal's fame in his lifetime. Certainly he had to have been a writer to gain a public platform, to begin to appear in the media. But he had such a genius for media appearances that his fame as a personality soon came to dominate over his fame as a writer of novels and essays. As Seymour Krim put it in 1969,

…for 20 years [Vidal] wrote novels with no loud success until Myra Breckenridge—yet all of a sudden he seems to have walked into a spotlight glittering with a million bucks, "national prestige," intellectual respect, multiplying projects, and also the very tangible power denied to most pathetic dollar-begging literary lives in our disunited States. The interesting thing is that while the practice of literature or at least the common novel gave Vidal the opportunity to be a Somebody, it is not on the basis of letters pure and simple (even complex) that he has created a stir about himself…. The success is in close-combat American life.

For Krim, Vidal wasn't a novelist so much as a media personality, someone who would hash out any battle with any opponent on the air, and do so with such an idiosyncratic and memorable style that he stayed in the mind as an icon, or a brand. And when he aged, and died, and slipped from the media, that part of his reputation died with him. He was so good at this kind of ephemeral media activity that parts of this side of his life—the debates with William F. Buckley, for example—have been commemorated in documentary film. But in the end, the kind of fame he had was the kind of fame you can only maintain by constantly appearing in the spotlight, connecting yourself and your opinion to each passing spectacle. Now that this is no longer possible, we're left with only the books, and an archive of old film and videotape on issues that were once in the headlines. The books will survive, I'm sure of that. But the media personality? I liked him. May he rest in peace.