Mohammad vs. Silliman (No, Not That Mohammad) 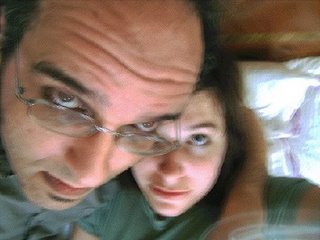 K. Silem Mohammad is onto something over at his blog, with his Sept. 1 post, Notes on (Dis)quietude and the "Post-Avant". So onto something is he that gladly would I have cornered him after his reading here in Chicago last Friday — had I not been entering the second week of my annual the-students-are-back-and-breathing-exotic-germs-on-me illness.

Anyway: here's what Kasey's onto: Silliman's Big Manichean Dichotomy of Poetry, (in which the world is divided into a mere two camps, the so-called School of Quietude and the so-called Post-Avant) depends on an untenable assumption. The assumption being that aesthetic radicalism = political radicalism, and aesthetic conservatism = political conservatism. Here's how he puts it:

I am sympathetic in some ways to Ron Silliman's (in)famous classification of "School of Quietude" vs. "Post-Avant"*, at least within limited historical parameters. I have used the terms myself from time to time, effectively as synonyms for "mainstream" and "experimental" (labels that are admittedly problematic in themselves). But a central problem with Ron's binary is that it attempts to conflate two separate (though often coinciding) realms of distinction: the aesthetic or formal, and the social or political. At one point, perhaps, such markers pointed to a tangible divide, but that divide has itself become divided so many times over that it has become increasingly less possible to maintain the dichotomy. What kinds of conceptual violence have to be committed in order to make, say, Adrienne Rich fit into a quietudist pigeonhole, or in order to think of Jorie Graham as post-avant in Ron's sense?

I've been thinking a lot about this sort of thing lately — this summer I finally got the first parts of a new book of litcrit, The Aesthetic Anxiety, off the ground, and one of the things I want to do in that book is describe the history of exactly the kind of conflation of aesthetic and political radicalism that Kasey is onto in Silliman.

Long story short: this sort of thing has been going on since at least the late nineteenth century. You find the assertion of an identity between aesthetic radicalism and political radicalism in all sorts of unlikely places (like Swinburne's prose, for example). By the time you get to the twentieth century, this has become kind of a reflexive position for avant-garde movements: it's one of the recurring themes of Andre Breton, for example. And it lives on today.

Why, you ask, did this conflation occur? I mean, Kasey's mention of Adrienne Rich would seem, by itself, to blow a great gaping whole in the side of the argument, through which would seep a sea of other examples, drowning the good ship S.S. Avant-Smug beneath the waves. An excellent question! I try to answer it in the first essay from the book, which will come out (oh glacial pace of academic publishing) sometime next year. But the gist of it, I think, is this: once art becomes something done for its own sake (not for the Church, not for the Noble Patron, not for the bourgeois market) (and of course much art continues to be made for all of those things) (but some isn't) — once art becomes something done for it's own sake, a lot of artists who love the freedoms of this autonomy become haunted by the idea of uselessness, irrelevance, etc. How to be both free and useful? Believe that freedom is a kind of radical political utility! Shazam! Problem solved.

Well, it's all a little more complicated than that, but the record really does seem to bear this out to some degree (Oh, hours in the archive! Oh mildew and lousy light! Frolic did the nymphs and swains this summer, while Archambeau did moulder in the tower of fusty learning, oh!).

As a guy who has been trying to get a grip on these things through looking at the history of the ideas involved, I'm especially glad to see the historicizing note at the end of Kasey's piece:

The error of distinctions like "quietude vs. post-avant," or for that matter "quietude vs. disquietude," is that they attempt to abstract outward from specific discontents and insufficiencies to general judgments about larger formations, and to maintain those judgments across time. It is harder than it ever was before to argue that there is a consistent "mainstream" whose adherents uniformly subscribe to dominant ideologies of literature and culture--just as it is increasingly hard to argue that anything like a consistently "resistant" avant-garde is comprised by the totality of writers who adopt "experimental" aesthetics.

In other news, Natalia kicks some poetic butt.
Posted by Archambeau at 11:47 AM No comments: