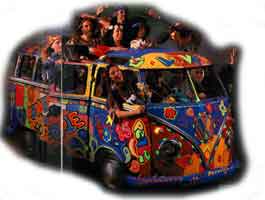 Okay, fans, you're in luck: this summer's Robert Archambeau World Tour is concentrated (so far) in the greater Chicago area, so you can catch both dates without having to put too many miles on the VW microbus you and your hippie pals had planned to use as both vehicle and residence as you followed me from town to town.

The tour begins with a May 22 gig at the University of Chicago, as part of the Council of Advanced Studies' Poetry and Poetics Workshop Series. The talk is, at the moment, called "The Aesthetic Anxiety."

After a brief hiatus, during which I'll be trashing hotel rooms, chasing supermodels, and dodging paparazzi, I'll emerge from my hiding place at the Chateau Marmot to speak on July 29th, at Northwestern University's Art and Craft Summer Writer's Conference, where I'll be talking about blogging on a panel with Bust magazine writer Wendy McClure and noted novelist/New Republic guy Kevin Guilfoile.

What a long, strange trip it will be.*

Posted by Archambeau at 7:37 AM No comments: