Anywhere Out of the World: Locating Romanticism 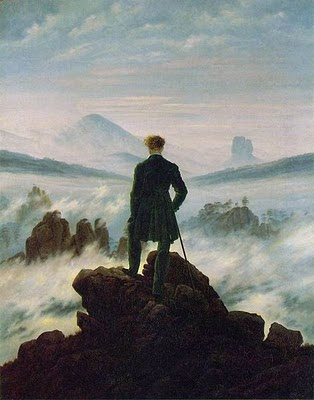 It's the end of August, and I'm already back to teaching. Since I've got a seminar on Romanticism this fall, I've been trying to think through just what that term has meant.

Definition's a tricky business. On the one hand, one doesn't want to fall into the trap of believing in trans-historically valid ideal types, or eternal forms. That is, you just don't want to treat Romanticism as a simply definable essence of some kind that pops up here and there in history, perhaps locked in battle with another trans-historical absolute called Classicism (I do, though, see Romanticism as a structure of feeling that didn't end when Queen Victoria hopped on the throne, and hasn't gone away yet — it comes out of conditions that haven't entirely disappeared). On the other hand, it's just as dubious to go over into some boneheaded nominalism, and refuse to believe that any word other than a proper noun has any meaning whatsoever. Abstractions may well repress certain elements of the whole truth, but they also express important things that we can't get at any other way. Besides, abstractions are like rationalizations: just try getting through a week without using one.

My usual move, when I want to define something, is to root around a bit in the history of the term, looking at how it's been used over a period of time (Raymond Williams is my guide, here, and Keywords my holy text). In the case of the term Romanticism, I'm not quite up to tracing the whole history, but a look at how it's been defined by some of the major critical thinkers over the last century or so is a decent enough start. It's what I did in an essay about Nick Cave and Romanticism I just finished drafting, and from which the rest of these remarks are adapted.

Carl Schmitt argued that Romanticism was all about the individual's "subjective occasionalism," a kind of fetishizing of the moment of individual spontaneity — in a literary context one might think of Jack Kerouac, hopped up on Benzedrine, and clattering away on his scroll-fed typewriter, or shouting "Go, man, go!" at Ginsberg's Six Gallery reading of Howl as the late-blooming apotheosis of sort of Romantism. The Encyclopédie Larousse tells us that it's really all a matter of form, of artists who "freed themselves from the classical rules of composition and style" — one thinks of Paganini cutting loose with defiantly flashy and unruly solos. M.H. Abrams says it's all a matter of emphasizing the visionary imagination, with the mind seen as a light-casting lamp, not a mirror reflecting the world as it is. Morse Peckham said it was all a matter of self-assertion, and so did Bertrand Russell ("Titantic cosmic self-assertion," said Russell, thinking of Lord Byron as the first great rebel without a cause). Irving Babbitt went a step further, saying Romanticism was an "anarchy of the imagination," such as you might find in Rimbaud (not an example he uses). But Karl Mannheim went the other way, saying Romanticism was fundamentally conservative; dead-set in opposition to the ever-rising "bourgeois-capitalist mode of experiencing things" — if you've had a look at Wordsworth's depiction of Bartholomew Fair as a Dantean circle of hell (it's in The Prelude), you've seen this kind of Romanticism.

Since Romanticism can appear in so many aspects, it's no wonder, really, that Arthur O. Lovejoy shook his head in despair and said we should give the term the chuck, or at least speak of "Romanticisms" (a move that doesn't really solve the problem, any more than saying there are "types of poetry" solves the problem of defining poetry). I was almost willing to join Lovejoy, though, until the great Franco-Brazilian sociologist Michael Löwy set me straight. What holds all these loose strands we want to call "Romantic" together, for Löwy, is their opposition to capitalist modernity – their sense of not fitting at a comfortable angle vis-à-vis industrialism, the quantification and rationalization of all things, technocracy, and the general disenchantment of the world. Anarchists? Backward-looking reactionaries? Imaginative visionaries? Stylistic malcontents? Individualist outsiders? Come on in, people — Löwy's bigtop is a commodious place.

The bigtop's inhabitants all have one thing in common, though: the modern world has left them homeless — sometimes literally, in the form of the poète maudit kicked out of his garret by a greedy landlord— but usually in a more metaphorical way. It makes sense. Think about the state of things when the first generations of Romantic writers came of age: the arts, long the handmaidens of church and state, had lost that affiliation in the breakdown of the old social order, and had yet to find a new one in the gaudy commercial world that would take its place. Displaced from their old social roles, Romantic writers would leap into invented worlds, like Blake did. Or they'd dream of a transformed future world, of revolution and Utopia, like P.B. Shelley. Or they'd look to what they imagined as a lost, better world: like childhood, or village life deep in the provinces — Wordsworth's great themes. Sometimes they yearned for the fuller, more organic social life in the middle ages, the period of the romances that gave the Romantic movement its name. If they were particularly bright and observant, like the nineteen year old Mary Shelley, holed up in Switzerland with her husband Percy, Lord Byron, and their egos, the Romantics would dream of monstrous outsiders whose great minds and open hearts meant nothing to the torch-and-pitchfork bearing peasants who drove them to endless wanderings. The world did not fit, felt these dislocated artists and intellectuals, and wherever they looked, it was to turn away from the modern bourgeois world of getting and spending that seemed to have no place for them. Perhaps Baudelaire got at the situation best, when he called for a voyage going "anywhere out of the world."