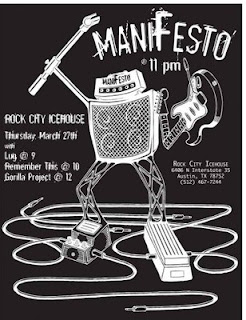 No, no, I'm not dead or otherwise incapacitated: it's just that I've been busy tapping out some reviews and plugging away on a chapter about Tennyson for The Big Boring Book of Aesthetics, Politics, and Poetics, which, if my current pace continues, promises to be a posthumous work.

But that's not why you stopped by. You wanted to ask "what have you published lately, chump?" Ah! Glad you asked. Well, the June issue of Poetry just arrived, and it includes "Marginality and Manifesto," an essay I wrote about poetry manifestos. Specifically, the essay responds to the collection of manifestos from the February issue of Poetry.

Long story short, what I say in the essay is this: when one looks over the February collection of essays, one wonders whether the manifesto form might be, for the moment, exhausted. Not that the manifestos were bad: they were, without exception, interesting, clever, and engaging. But they tended to be anti-manifestos of one sort or another. Some parodied the will-to-power aspect of the genre, others were deliberately provisional where manifestos have traditionally been bold, others were defenses of tradition where manifestos have tended to be avant-garde, still others were nostalgic for a lost era when manifestos seemed to matter. Why, I wondered, this sense of exhaustion?

To answer the question, I had a look at what I took to be the two main motivations of manifestos in the early 20th century: to challenge the marginality of poetry in society, and to challenge the established poetic style from the margins of the art. The first of these goals still seems to motivate poets across a wide stylistic spectrum (it's the impetus behind both Dana Gioia's Can Poetry Matter? and Charles Bernstein's "Warning Poetry Area: Publics Under Construction"). But the second, which always produced more manifestos, doesn't seem to pertain: we don't, I argued, really have an establishment style in any meaningful way. Which is not to say we don't have a poetic establishment (Jed Rasula's book The American Poetry Wax Museum is a great study of just how that establishment works). But the establishment isn't predicated on style so much as on institutional access and support, on big name journals, grants agencies, and prestigious university posts. One could rail against this, as one's instinct is to rail against all privilege. But in a way, we're lucky to have grants and university posts: in the early 20th century, poets were, by and large, without any kind of market or patronage, having lost the old aristocratic system of support over the nineteenth century. One could even see the flurry of manifestos in the modernist era as a symptom of a climate of scarcity: when people are well fed, they're less inclined to fight. Or so I argued.

Of course the movement away from prescriptive, declarative manifestos doesn't mean there aren't broad shifts in style, and attempts to describe them: in fact, the latest Boston Review contains a very interesting essay by Stephen Burt on just such a stylistic shift. The essay, "Poetry's New Thing," argues that emerging poets (emerging, I suppose, to broader visibility) like Graham Foust, Devin Johnsoton, Zach Barocas, and Elizabeth Treadwell have moved away from the elliptical style that became one of the more prominent modes of poetry in the 1990s. These poets, Burt claims, are more interested in documentary, mimesis, and things in the world than were the elliptical crowd. He's certainly right to see the influence of Objectivism on many of these poets, and I'm happy to see him single out The Cultural Society as an important venue for the work of many poets in this crowd: I think it's one of the best poetry things going on the web.

Steve, who gave elliptical poetry its name a decade ago, is out to name the new thing, too. In fact, given this kind of poetry's emphasis on things (as opposed to linguistic disruption), he offers "The New Thing" as a name. I kind of like the minimalism of it. We'll know it's taken off as a term if people start arguing about it. I'll start now: Steve argues for Rae Armantrout as a major precursor to The New Thing. Fair enough, but since The New Thing includes, along with neo-objectivists, an emphasis on documentary, I'd argue for John Matthias and Michael Anania as precursors, and point to their influence on a number of the poets Burt names, such as Devin Johnston and Michael O'Leary. And while I'm glad Steve points to the University of Chicago as a breeding-ground for The New Thing, I wish he'd mentioned Garin Cycholl, currently teaching there, as an important documentary-style poet. Anyway: it's an exciting essay. Sadly, it's not on the Boston Review website, at least not yet. But you can scoop up a copy at the bookstore when you're picking up the latest Poetry.

UPDATE MAY 26: Will Fertman, the self-described "P.R. goon" for the Boston Review dropped me a line to say that Steve's piece is now up online. Check it out!

Posted by Archambeau at 12:46 PM No comments: