What Decadence Means to Me 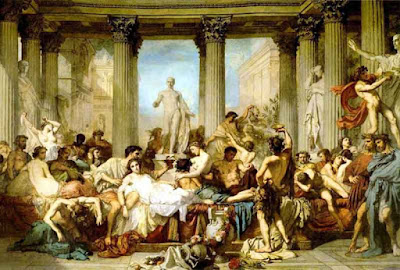 When I recently posted a few comments complaining about the clichés of contemporary poetry and calling the poetry that uses them decadent, I thought I might catch some flack. But I thought the flack from people who admire the qualities I (following — indeed, quoting from — Jason Guriel in a recent article in Poetry) saw as clichéd: "reliance on buzzwords"; "distrust of order"; "distrust of linearity and having a point"; "anxiety over what words mean"; "romantic bluster"; "imprecision"; "sympathy for small critters." Instead, I caught flack from a different direction: a couple guys whose opinions carry a lot of weight chéz Archambeau (Johannes Göransson and Gabriel Alexander) objected to the use of the term decadent. They've got a point.

Johannes reacted, I think, primarily to a passage where, after listing the clichéd qualities, I said that "the point isn't that these are bad things, just that they've become a kind of decadent tradition in poetry, a set of gestures often made less because they have importance but because they are taken to signal 'poeticness.'" Here's Johannes, from his blog Exoskeleton: 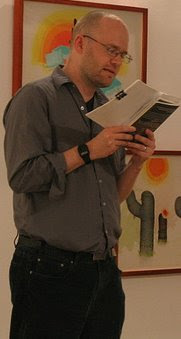 I've seen this term [decadence] used very strangely around the Internet as of late. Here is Archambeau using it to mean the use of empty manners. So does CK Williams in the little article that made me so irate the other day.

This seems like a strange use of the term.

(But I think Archambeau is largely right about "poeticky" features.)

So in part Johannes and I are on the same page: we both think some elements of poetry are used more to declare poeticality than for any other reason. But he dislikes the use of the word "decadence" here, because it refers (with a capital "D") to the artistic and literary movement of the late 19th century that stressed a dissent from banal bourgeois ideas of 'progress,' that reveled in l'art pour l'art, that celebrated sexual and moral actions and positions beyond the accepted norms, etc. (you know: Gustave Mirbeau, Huysmans, Nerval, Beardsley, Rops, Symons — those guys). Johannes, with whom I share a distrust of anyone who uses "avant-garde" as a transhistorical term, rather than with reference to a particular moment, objects to my ham-handed abduction of the term from its context. Fair enough.

Gabriel Alexanderg, whom Johannes quotes in another post over at Exoskeleton, makes the criticism more explicit:

>I'm interested in the decadent, too. But, I think, less as an adjective that implies self-indulgence or as a platitude. I believe I bristle at its invocation in the same way I do when "avant-garde" is dehistoricized and implemented as a place-holder for any number of aesthetic possibilities. I'm all for the transformation of meaning and the mutation of words, so I'm not generally frustrated with [sic] But I do think that to use *decadent* as an indictment actually mirrors much of the Victorian backlash against the French Decadents and their off-spring (and predecessors) [*Note from Archambeau: I don't entirely buy the chronology of backlash here, but I also don't think that's too important for the present context]. It's much more fruitful for me to think of the decadent as deeply involved, as décéder implies, in death, disintegration, and the dissolution of boundaries. More provocative to think of the decadent as a coda with a Hydra head.

To which Johannes adds this comment: "I think the critique reflects a similar notion: the idea that there is a natural, strong poetry and a weak, artificial poetry."

In response, all I can say is "this isn't what I meant!" I don't think there is a single, transhistorically valid style, one that is naturally good and strong and that we fall away from at our peril. But I can see, given what I said, why Gabriel and Johannes would think that's what I was on about.

So, that mea culpa behind me, I suppose I should address the question of just what I did mean.

I suppose what I wanted to say was this: there are good things that can be done in any style, but style is at its best when it comes out of a deeply-felt engagement with current norms of thought, feeling, and art-making. This engagement may take the form of an affirmation of the current, a criticism of it, or even a total negation of it. It may even be an attempt at a negation of all norms. But a style tends to be less interesting when it is accepted uncritically, when it is taken up simply because it seems to be the way things are done. If we accept a style or a tradition because it is there, it's being taught, it's being published, not because it speaks to some more fundamental need, I think there's a strong chance that we'll produce work that's clichéd. The clichés may be those of clarity (think Augustan poetry), or they may be clichés of (to quote Gabriel) "disintegration, and the dissolution of boundaries." For me, it's not a matter of one style being the transhistorically good, and deviations being degenerations. It's a matter of a style being taken up uncritically and unimaginatively.

I'm not sure which C.K. Williams article Johannes was frustrated with, but it might have been the one in the same issue of Poetry that contained the article where Guriel listed his seven clichés. If so, it's an article in which Williams proposes that styles have an instrinsic entropy to them. He also makes sloppy use of the term "decadence," saying:

Another characteristic of creative systems, what is usually called style, is that they have a terrifically conservative tendency. Styles are always striving to perfect themselves, by which I mean that styles have inherent in them the potential for enactments that no longer depend on anything but the demands of the style itself: neither matter, content, nor, in other words, world. Stylistically, art is always moving from the transparent to the opaque, from trying to make encompassing and as comprehensive as possible its relations with reality, to a state in which its formal dexterity comes to be its most essential requirement. When this happens, usually during the late moments of an artistic era, the execution of style becomes an end in itself, the end in itself: art becomes style displaying itself, preening, showing off.

This is when an artistic style becomes decadent. Decadence in itself isn’t intrinsically bad, it’s unavoidable, and some of the very greatest art is created at the end of the innovation-decadence cycle. What happens then, though, is that some subtle line is crossed, and the gloriously decadent becomes the offensively empty, sterile, and, with no longer any portion of the quest of the artist’s blundering soul a part of it, produces work that is lifeless, stillborn.

I remember being frustrated with this article, not because I thought it was entirely wrong, but because I thought it presented a half-truth. I mean, obviously I agree that styles can become clichéd, but I disagree that self-reference necessarily pairs up with lifelessness, and (more importantly) I disagree about changes of the sort Williams describes being an intrinsic quality of any style. I think that when a style becomes a cliché, it usually has to do with particular historical conditions, rather than being simply something that happens when a style ages. I don't think there's a cycle to styles, separate from their intersection with events, institutions, and the like.

In our current moment, I rather imagine that the increasingly clichéd status (and I agree that cliché is the better word, not decadence) of the qualities Guriel names is connected with what Ron Silliman once called the 400-pound gorilla of our poetic scene: the academy. I mean, if Victorian doggerel came about because the book market of the time called for easy moralism and stylistic clarity, our own kind of institutional conditions influence what becomes clichéd in our own time. In fact, it was a post Johannes put up on Exoskeleton about his experiences in the Iowa MFA program that got me thinking about this some months ago. He described his fellow classmates thusly:

Lots of people bantered around the phrase "post-language poet" - as in "I am a..." This means that they - like Jorie [Graham] - used some of the textures of langpo to recreate high modernism, elegance, high learning - as opposed to ... "Images" which were vulgar and had to be controlled against their natural tendency toward excess; "confessional poetry" was ridiculed; "indeterminacy" was important... because it was "complex" and thus more "realistic." I remember a debate I got in because someone called something (not mine) "pornographic" because it wasn't complex...

The conformism was striking: everyone wanted to do what the charismatic, professionally successful teacher had done. It had the sheen of sophistication (academe loves this), it had pedigree (academe loves this), it seemed current (academe loves this). It wasn't for the casually-interested and uninitiated (acadme loves this). It's not that the style these guys were turning to was in any sense intrinsically 'decadent' — it's that the style was being adapted in what seems like a kind of herd-move, for what seem like professional reasons more than anything else (and for reasons very different from those that led to the genesis of langpo, from which much of the style derives). This is the sort of thing that leads to cliché, which is what I was trying to get at when I talked too loosely about decadence. Maybe a better way to discuss it is as suboptimal centrality, but that was a different blog post.

In news from the stuff-I-wrote-now-in-print desk, I've got a very short piece on Bonnie Costello's Poetry, Still Life, and the Turning World in the latest Boston Review.

{Errata: in an earlier version of this post, I said "Gabriel Gudding" when I meant "Gabriel Alexander." More mea culpas!}

Posted by Archambeau at 2:53 PM No comments: