What Good's a Goat? 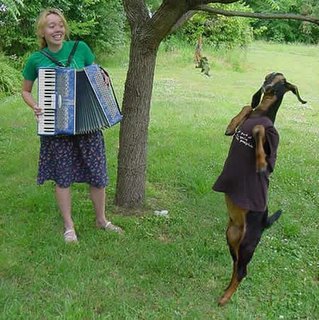 Eric Selinger and Mark Scroggins have started knocking another ping-pong ball back and forth across their blogs: this time it is a question about evaluation. Mark begins by quoting Donald Davie, who looks at two of the great judgmental geniuses of litcrit and approves:

That I cannot concur in either Leavis’s or Winters’s way of dividing the sheep from the goats, is beside the point: what I esteem in both of them is their common insistence that sheep there are, and goats there are; that in the arts, as between the genuine and the fake, or between the achieved and the unachieved, there cannot be any halfway house.

Eric, initially appalled by the idea of evaluative judgment, comes around to a very balanced position when he writes:

Now, I know that we all do, in fact, pass such judgments all the time. Maybe the virtue of Davie's remarks lies in reminding us of that simple fact: we pass judgments, and we should be prepared to articulate and defend them. Maybe this is one of the "things to do with poems" we should add to our list. On the other hand, do I really want to spend class time trying to convince a student--or hallway time, to convince a colleague--that he or she shouldn't like something he or she enjoys?

The thing to remember, I think, is that it is almost meaningless to simply say "Poet X is better than Poet Y." One really does need to specify what the better poet is better at. That is: it isn't good enough to say that "Zukofsky's poetry is good," you need to say what Zukofsky's poetrys is good for.

So evaluative criticism needs to be aware of the telos, or goal, as the standard which it is evaluating a particular poem or poet against. This can take a kind of relativist tack ("Mallarme is a better poet than Bukowski for revealing the mystery of language; wheras Bukowski is a better poet than Mallarme for helping an angry adolescent of middling intellingence feel special and understood," say, or "Wordsworth is a great poet for those feeling unrooted, but Shelley is a better poet for the politically oppressed"). But it can also take an absolutist tack — Yvor Winters could make such idiosyncratic and forceful evaluations because he had one single clear set of criteria which, he'd convinced himself, was absolute ("does this poet judge experience correctly, rationally, and in careful form?" would be a close paraphrase of his position). If a poet were good at something else, it didn't mitigate his badness for Winters, because there was only one thing worth being good at.

I tend toward the judgmental relativist position myself (some poets are better at some things than others are). But I also think it is better, at certain points in time, to be good at some things than at others. Hence my argument for a contingent poetry that embraces history: I think we need something like that now, and, as good as someone may be at the "scenic mode" of personal epiphany, this is less important for our moment.
Posted by Archambeau at 8:38 AM