Sheena is a Punk Rocker: Notes on Poetry and Rock

Prepare to rejoice, poetry people: the next issue of Zach Barocas' Cultural Society is about to go live online. Incidentally, you may find hidden among all the fabulous joy-worthy things Z will offer us from his secret base Minneapolis ice-fortress my own humble contribution, "Sheena is a Punk Rocker", a poem I read at the big MLA off-site poetry blowout about a month ago. The poem isn't my first attempt at a rock-and-roll poem — I've tried my hand at the form, with mixed results, ever since I first read David Wojahn's Mystery Train, which still tops the charts of rock poem efforts as far as I'm concerned. But it is my first Ramones poem, and it shamelessly (and unsurprisingly) riffs on this song: 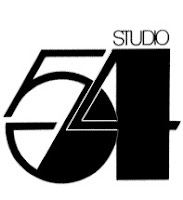 I suppose what attracted me to this particular Ramones song was the way it dealt with transformation: Sheena's on her way to the discotheque, but then suddenly ditches her whole identity as disco club kid and reinvents herself as a punk rocker, to the infinite sorrow, one supposes, of the louche and coked-out roués at Studio 54 (the song was written in 1977, the year that club first oozed its way into Manhattan). I always loved the way the Ramones captured the kind of fizzily cool weightlessless of youth: switching who you are is as easy as ripping a hole in your jeans getting a wonderfully ill-advised piercing in an unpredictable location. There's a lot of freedom (and a lot of angst) in not yet having much personal past as ballast. And the Ramones ought to know about transformation, strutting around in street-tough drag and pretending to be New York Italian brothers. 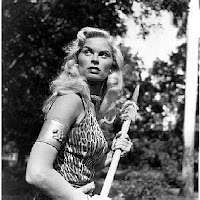 I also liked what I knew (or maybe I should say "what I thought I know" — this could just apocryphal, which is cool by me) about the origins of the song. Joey Ramone came up with the idea, I'd heard, after he's seen a movie theater matinee composed of old episodes of this show from the fifties, Sheena, Queen of the Jungle, which is pretty lame pop-cult stuff, unless you accept it on its own terms, which seem to involve an aesthetic program best paraphrased as "How about seeing a big blonde bombshell in a tiny leopardskin minidress?" (The politics of the show, by the way, make Uncle Tom's Cabin look like Soul on Ice). But I liked the idea of one pop artifact being transformed into another. And the chain of transformations goes back and back, all the way to Rider Haggard's She, with a few stops via American comics and the British pulp press along the way.

So anyway, I thought I was writing a poem about transformation. When I was done, I noticed that the driving forces behind the transformations (as I'd depicted them), were lust and profit. Maybe my subconscious was biting me in the ass for spending my sabbatical working on a book about aesthetic autonomy. After all, creativity has sweated away in the service of greed and desire far more often than it's lit the pale candle of l'art pour l'art. But just as I was patting myself on the back for finally peeping out what my own poem was about, I ran across this, from Steve Burt's new book of lit-crit, The Forms of Youth: 20th Century Poetry and Adolescence. A propos a sonnet by Ronald Wallace called "Sound System," Steve says:

... rock means youth, innocence, sex, rebellion, hope, and immediacy. Poetry, by contrast, frames those qualities and compares them to a disappointing present; poetry, unlike rock, makes us notice loss...

Later, Steve tells us this:

Rock music brings with it a far stronger claim to signify adolescence and to convey immediate, authentic feeling than any claims that literary poetry can now make. In asking readers to compare poems about rock songs to the songs that these poems describe, poems about rock admit their own failure to find or keep the inner autonomy that we often hope poems can give — and that we associate with youth.

..."sentimental" (or "reflective," sentimentalisch), in Friedrich Schiller's special sense. Modern poets, Schiller wrote in 1795, "will either be nature or they will look for lost nature"; the first are naive and need only "feel" to create, the second sentimentalisch and self-conscious. Poets who put rock into their poems cast rock as "naive," natural, authentic, youthful, and their own poetry as "sentimental," reflective, artificial, grown-up.

I mean, egad! Could this be it? Have I been pining like some not-so-young Werther or no-longer-childlike Childe Harold for the unattainable and the lost? Against such knowledge, what defense? Ah, I know! Quick! To the stereo! Crank it up, up I say! Ah, that's it — Gabba Gabba Hey!