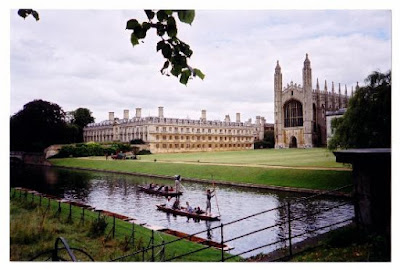 It's been a few days since I've been back from Cambridge, where I was speaking at a conference on the late, great Swedish poet-critic, Göran Printz-Påhlson, but it's been too much of a holiday weekend to blog. Since I've been back it's been nothing but sweating down the bike trails with Team Slow Ride, lounging in the hammock, trekking to the zoo with my wife and daughter, trying to get the beach sand out of my hair, and hanging with friends at the BYOB Mexican joint while they regaled me with tales of their trip to Thailand. And there were fireworks. But I'm back at the computer now, people, and there's no avoiding my comments on the Cambridge caper. Here, in mostly chronological order, are the Observations of the Intrepid Traveller.

Heathrow. It's not just jet-lag that makes Heathrow seem so strange. It's the category-defying nature of the place. I mean, first-world airports tend to be of two kinds: the sleek, modern, clean sort (think Chicago-O'Hare, or Amsterdam Schipol, or whatver they've built in China this week), or the overtly beaten-down and desperately crappy (think LaGuardia, or Rome's Fiumicino). But Heathrow sort of fakes you out. If you arrive at Terminal One, it seems sleek and modern enough at first, but as you make the long schlep toward the exit, it slips into a Frayed 1970s mode. Then, as you continue on and downwards toward the tube hook-up, you go through a short passage of Swinging Sixties Gone to Seed, before emerging into a long tunnel that sould be labeled The Museum of Decayed Linoleum, certainly dating from about 1950. Luckily, this is as far as I ever have to go, though I'm pretty sure that a hundred yards on I'd have found the original airport of Roman Britain.

The Frickin' Shire or Something. That's about all I have to say about the English countryside between London and Cambridge. Later, when I was having dinner with Andrea Brady, she called it "overtly benevolent," which seems about right. But something in her tone made me think she shared my view that it's all so pretty that it should be treated with suspicion. I mean, don't you sort of think the kindly old woman bringing you cider or scones will be screaming for your blood at night once the crowd has come to burn you in a giant wicker man in some holdover druidic ceremony? Maybe that's just me.

Cambridge. I lived in Lund, Sweden, which is also a medieval university town built around a big public square, so my first thought about Cambridge was "Lund, if Lund were populated exclusively by German tourists and guys who look like Stephen Spender in white linen suits riding bicycles." (As to the hazards of riding bicycles while wearing white linen, hold on. I touch on this more when I get to my meeting with a publisher). I did manage to get out of the academic zone, visiting poet Richard Berengarten (formerly Burns) in his house, which seems to be made up of several old row houses knocked together and filled to bursting with books. He proved beyond doubt that you can find very good Turkish food for a party of twelve in Cambridge on a moment's notice. He also proved how much one could accomplish before email, when he showed me the program for the first Cambridge Poetry Festival, an invention of his back in the seventies. There must have been eighty poets from all over. As a guy who's organized a few literary festivals, I can tell you there's an amazing amount of what may dad calls "ass-grind and agony" involved in putting something like that together.

The Conference: Afternoon. This was an interesting event, not just for what was said (and any event where the Sorbonne's very own Jesper Svenbro is speaking will be interesting for what is said), but for the nature of the event. As the Berengarten pointed out as he began his remarks, this wasn't just an academic event, though it was surely that. It was also a poet's event; and what's more, it was an event for family and friends of Printz-Påhlson, who'd turned up in force. The world needs more events like this: it adds a little gemeinschaft to the generally gesselschaft world of conferences.

The Conference: Evening Poetry Readings. Dinner at Clare Hall, at a long table of conference participants presided over by John Matthias. It was good to see John Wilkinson, whom I finally met earlier this year when I was giving a poetry reading in South Bend (which he has recently abandoned for Chicago). He's a charming guy, and I like that he's unbothered about how we've sparred a little in print about J.H. Prynne and those influenced by him. It was good, too, to finally meet Andrea Brady, with whom I've also had some fisticuffs in the pages of obscure quarterly magazines. She tells me there's less going on, poetry-wise, in Cambridge than there was a few years ago, though Justin Katko is there and going strong. I told her my story about being snubbed by John Ashbery, and asked if she'd ever been snubbed by a famous poet. "As a younger woman," she said, "it doesn't really happen." She was rather glamorous in a summer dress, so I took her point. After dinner came a series of readings, with a sort of astonishing range of poets put together by Matthias (the rationale being that "these are poets who knew and admired Printz-Påhlson, or who I am convinced would have admired him"): Clive Wilmer from Oxford, Berengarten, Jesper Svenbro, Matthias himself, my old colleague from Lund Lars-Håkan Svensson, Andrea Brady and John Wilkinson. I'm sure there were others, but I'm having trouble remembering (the chardonnay wasn't very good, but the soave sure was). It's the first time I've heard Wilkinson read, and it was a bit of a surprise. All the instruments agree about Wilkinson being one of the pleasantest, mild-mannered guys you're likely to meet, but he reads with a powerful, macho kind of aggression (the subject matter of his pieces, which he described as "de Chirico nightmares" added to this). The effect was similar to what I experienced when I saw Keston Sutherland read in Chicago some years ago. It makes one wonder if this was the common style of the group of poets who clustered around Prynne a while back. If so, it sheds a new light on a some comments Andrea Brady made about how it could be a bit alienating being one of the only women on that scene. Speaking of Prynne, he was there, wearing what appeared to be a red star pin on his collar. I wonder — given his popularity in China, has he been made into some kind of Chinese version of the Chevalier de Légion d'Honneur? Or is it a matter of expressing approval of the Chinese regime (one hopes not). Or maybe it's something else entirely. I didn't ask, since I saw Romana Huk across the room and wanted to say hello.

Non-Conference Things.. Other than wandering around gawking at the punts on the Cam, and having an entirely pleasant beer with an old grad school friend now with Cambridge's department of Anglo-Saxon, Norse, and Celtic, there's not much to report except…

A Very Cambridge Moment. John Matthias, the wonderful Elinor Shaffer of Cambridge and of Comparative Criticism (sister to Sir Peter Shaffer, whose Amadeus you've seen twice), and I were waiting to meet with the president of a certain Cambridge-based publishing firm (no names, but it's not Chris Hamilton-Emery), who was late. As we sat waiting, the publisher, a dashing man in white clothes came tearing into the room, with a black, hand-shaped stain on his shirt. "Terribly sorry," he said, seeing us, but I can't shake your hands. He held up his own fingers, utterly blackened with oil, "typical Cambridge excuse: broken bicycle chain." It's not quite how things go with New York publishers, whose oiliness is in their souls, not on their fingers.

And so it was back to Chicago, with no time to meet with Michael Gregory Stephens and Katy Evans-Bush in London, as I'd hoped to do. There was barely time to hit the Harrod's in Heathrow to pick up a Paddington Bear for my daughter. 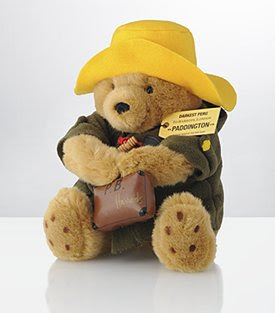 Posted by Archambeau at 4:25 PM No comments: