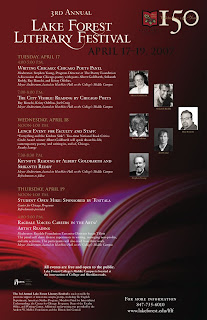 I find myself, dear reader, in the middle of a chickenshit monsoon related to next week's Lake Forest Literary Festival (clicking on the picture above will give you the official poster with all the info you need for three days of literary bliss). But all the guano-storms are going to be worth it: the theme this year is Chicago Poetry, and we're bringing in former Chicagoan Albert Goldbarth to headline an event featuring Srikanth Reddy, Ray Bianchi, Joel Craig, and Kristy Odelius, among others. The web site is (after much stuggle) up and running. Everything is free, fabuous, and open to the public! Here's how you get to campus, and here's a map of our leafy acerage, suitable for printing, if not exactly for framing.

Also, this just in from the good people at Salt: John Matthias' new book of poems, Kedging is coming out soon. Here's their press info:

Kedging is John Matthias’s first book of poems since his long New Selected Poems of 2004. The volume is divided into five parts: “Post-Anecdotal” includes short poems on autobiographical and elegiac themes; “The Memoirists” engages the lives and writings of Lorenzo Da Ponte, Edward John Trelawney, Frederick Rolfe, Céleste Albert, and Vernon Duke; “The Co-translator’s Dilemmas” deals with Swedish poets, Swedish poems, and issues of translation; “Laundry Lists and Manifestoes” ranges from Homer and the Old Testament to Internet technology; “Kedging in Time” deals with the lives of several families in the context of British naval history; and “The Back of the Book” prints an essay called “Kedging in Kedging in Time,” which was commissioned by Chicago Review as a commentary on the final poem in the volume. The three extended sequences in the book underline the observations of Mark Scroggins in a review of New Selected Poems – that Matthias, working in the tradition of late modernism, but in middle-length poems that are not open-ended, has “written one Briggflatts after another.” Robert Archambeau has said that Matthias writes “successfully in a wider range of styles than any other contemporary poet.” John Kinsella has said simply that Matthias is “a great poet.”

“One of the best poets in the USA.” —Guy Davenport

And here's an advance peek at the contents of Matthias' book:


’s all you’re good for
someone said. Is what? Your good

Your goods 5 and 6. With a little tug
at warp. So by a hawser winde

your head about. Thirty nine
among the sands your steps or

riddle there. Who may have
sailed the Alde is old now, olde

and addled, angling still for some
good luck. So labor, lad: when other

moiety of men, tugging hard at kedge
and hawser, drew us from

the sand? Brisk and lively in the
dialect East Anglian. Ain’t so well

as I was yesterday, for I was then
quite kedge. Even though I pull and

as not to weep, cadging as I can.

Okay, back into the monsoon. I did take shelter from it a few days ago, at an amazing British experimental poetry roadshow featuring Keston Sutherland and various post-Prynne types. More on that when the storm lets up and I scrape the chickenshit residue off my longsuffering shoes... 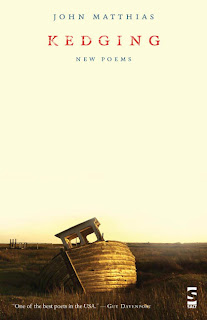 Posted by Archambeau at 11:38 AM No comments: