The Adorno Files: Hideous Progeny of the Culture Industry 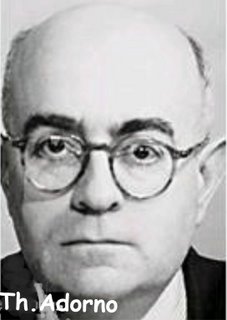 Park has some new notes on Adorno's Aesthetic Theory, including this interesting observation:

Adorno seems to argue that art in general is losing its autonomy because of the encroachment of the culture industry (significantly, a term he uses for the first time in this book just before this quote I'm dealing with). He does not allow that there may be some differences between different media in this. It's like some master switch has tied the essence of all art together, and ruined it all at once. I suggest that the process he describes--to the extent that it can be said to exist--is almost certainly more messy.

Park goes on to mull over the differences between music, visual art, poetry etc., in their capacity as things appropriated by the culture industry. But the interesting thing for me is this: the universality of Adorno's claim about the absorptive power of the culture industry (at the early point in Aesthetic Theory Park's talking about -- the second section). On the one hand, I want to point at all manner of exceptions, all of those kinds of art that work resolutely to remain uncommercial and unquantifiable — everything from Dada to Language Poetry to Punk. Then again, I can see how in some clever dialectical way Adorno is probably right about these forms being influenced by the prescence of the culture industry. I mean, you don't find many seventeenth-century poets or painters or composers working delieberately to distance themselves from, or immunize themselves against, a relentlessly commercial culture industry.

The culture market just isn't developed enough to seem like a threat to artistic integrity (whatever that may mean). So Dada or Langpo or Punk can be seen as conditioned by the culture industry by virtue of their reactive rejection of it. By virtue of their attempted negation of the culture industry, they are its dissident offspring (long may they wave). One imagines a personification of the culture industry looking on them with a horrified recognition, seeing them as one's own yet horrified at their altierity, their otherness, and saying, like Mary Shelley a propos her Frankenstein, "behold my hideous progeny!"

Posted by Archambeau at 10:06 AM No comments: