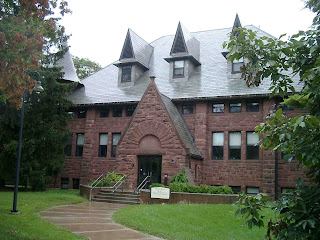 Although I had a hand in putting together the list of readers for the just-completed Lake Forest Literary Festival, I had to be out of town for the events themselves, so I'm experiencing them vicariously, mostly in Josh Corey's blog (where they are reported in two parts including video of Christian Bök performing), but also from this article by Lake Forest College's very own Kristin Kojarek (from Lake Forest's campus newspaper, The Stentor). Check it out:

The poetry seemed to leap from its pages during Lake Forest College's fifth annual Literary Festival this week as authors used hypertext, computer programming, sound performance, and other collaborative experiments to demonstrate how poems can function in realms beyond print.

One of this year's visiting artists, best-selling Canadian poet Christian Bök, collaborated with a group of students to perform poetry through a spectrum of sounds in the Lily Reid Holt Memorial Chapel on Wednesday evening. "Writing is a skill just like any other skill," Bök said. "It's a type of technical engineering."

This year's artist-in-residence, winner of the Madeleine P. Plonsker Emerging Writer's Prize, Jessica Savitz, performed a reading from her latest book, Hunting is Painting, for the first time. Savitz is the first recipient of the Plonsker award and her book will be published by Lake Forest College Press/ & Now Books.

Showing off another route of creative writing, Chicago-based poetry group Gnoetry and computer artist and hypertext poet, Stephanie Strickland, used computer programming to demonstrate how poetry can be combined with technology to create a new type of art.

"This encourages readers to look at art in more than one way. Hypertext does things rather than says things," Strickland said. "Poetry does not necessarily need to be stacked up on a page," Bök claimed.

Strickland used a Flash player to demonstrate poetry synergized with digital images in the Meyer Auditorium on Tuesday afternoon. A large gathering of students and faculty remained transfixed on Strickland's poems as she moved the mouse across digital constellations and waves of sand where her printed words blended with the visuals. Some text was printed over backgrounds of different types of moving water where the words wavered and became obscured by the ocean waves. When the text became more clearly distinguishable it often faded again. "This brings the reader to the brink of deciphering words," Strickland said. "There is an inter-relationship between the objects and the words, which can also appear as 3-D objects."

Some of Strickland's poems did remain as static text onscreen with a white background or were juxtaposed by a simple design or a picture such as MTA transit card. Every so often, a digital leaf floated across the screen or a flock of butterflies flew down from an upper corner and circled the page. Strickland explained that using moving images with text requires the reader to use new approaches to reading and focusing on poetry. "It is using a new medium to create a new poetic experience. Reading images while watching text requires new reading skills," Strickland said.

When asked how she first became involved in electronic art Strickland said she always had an interest in literature and science. One day, she attended a seminar where she learned about hypertext from electronic fiction writers. "It was around 1994, when we were on the edge of the Internet and I was exposed to many new and exciting things," Strickland said. Realizing that forms of art besides fiction could be used with technology as well, Strickland began hunting for images to complement her poetry. "There is no end in this type of work, but there are multiple beginnings," she said.

"[The festival] is a really nice way for students to have an annual event where they can read the work of an author in one of their classes, then meet that author and have a wonderful experience," Schneiderman said.

Junior Ashlee Norton said, "I was really looking forward to meeting Christian Bök after learning about his book, Eunoia and I liked being introduced to Stephanie Strickland's new and innovative ideas."

Senior Leah Scull said, "I really liked Stephanie Strickland's presentation because I admired the way she was able to mesh technology with poetry inspired from nature and science. The way she used a magnet in sand as part of her piece "The Ballad of Sand and Harry Soot" was beautiful and inspiring."

Posted by Archambeau at 5:57 PM No comments: