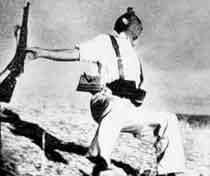 Am I violating any copyright laws by reposting this poem from Poetry Daily? I'm not sure. But Kevin Prufer is a poet I admire, and this new poem seems particularly timely. Prufer's last book, Fallen from a Chariot, is powerfully elegiac. I'd assumed from the intensity of that book's grief that the death he'd described there came from some event in his personal experience, and I still think that is must have. But here he shows that his ear for elegy is every bit as sound when he deals with events he's unlikely to have experienced first hand.


The boy who drowned in the bog, the boy caught in the rotors, the boy who laughed too loud —

The boy who swallowed the bee that stung the throat —

The rip cord worked, but the parachute fluttered weakly above him and would not bloom —

He put his foot down in the foreign grass and heard a click, as of metal on metal. When he lifted that foot —

Sometimes, they don't know they're being watched, leaning against their packs, asleep like that —

One more, one more, he said. One more all around — And the assembled clapped for him, they clapped, he put his money down and smiled because they loved him —

Sometimes a boy thinks he is unloved, so he retires to a dark tent where he will not be disturbed —

Then, the cells wink out like lights on a tall office building in a strange city at dusk —

His friends said it was a sad day, it was very sad. They thought he'd been kidding, they told him not to laugh like that —

You pull the string and out it blooms —

A guy who puts your name on the hard drive, a distant office, a simple program and printer —

You punch in the name and out it comes.

I taught some poems by the great World War One poet Wilfred Owen the other day, as I do most semesters in my 19th/early 20th century literature survey course. This semester my students were remarkably engaged by the poems, for reasons we can guess. That engagement, along with this new poem by Prufer, have me thinking with sorrow that we may soon find ourselves in another period of powerful poetry about war — poetry that will inevitably resemble Owen's work more than it will that of someone gung-ho and innocent like Rupert Brooke. There will be soldiers' poems, I'm sure, and probably a large body of work by those of us who only see the war on television and need to do something with the frustration and the grief. Prufer's poem shows just how good this latter kind of work can be.

Posted by Archambeau at 4:29 PM