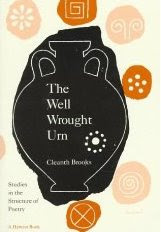 I've yet to see a copy, but judging from the email I've been getting from people who've read my contribution to the issue, the latest Pleiades is out. My piece is an essay called "The New New Criticism," which takes the occasion of the appearance of Garrick Davis' anthology Praising It New: The Best of the New Criticism as an opportunity to reflect on the nature of that oft-maligned, generally misunderstood movement. One of the things that happened when I sat down to read through Davis' anthology (and, after he got me hooked, a host of the main New Critical documents) was that I realized most of what I'd learned in grad school about the NC was wrong. The New Critics weren't, for example, all about formalism, nor were they, for the most part, ahistorical, nor were they particularly apolitical. I've heard people blast them for these qualities at the MLA convention, and heard people praise them for the same qualities at the ALSC convention. But they merit neither praise nor blame for qualities they don't really possess. The piece in Pleiades trots out some examples to show this, but here's the basic thesis (an edited-down version of the first couple of paragraphs):

I’m not sure who’s done more damage to the New Critics: their detractors or their defenders. Detractors condemn the New Criticism as a formalist movement, ahistorical and unconcerned with ethics or politics. Defenders generally don’t disagree with this depiction of the New Criticism—they just value it differently, hoisting it high as a tattered banner under which to rally the scattered remnants of the pre-identity-politics, pre-continental-theory literary intelligentsia. As in so many fiercely fought debates, though, beneath the clamor the two sides really agree more than they differ: both, after all, see the New Critics as formalists, and set them up against a set of politicized, post- 1960s approaches to literature. But does the consensus lying beneath the squabble offer an accurate view of the New Criticism? The challenge in reading the New Critics again is to try to see them without any of the preconceptions that underlie the debate between their detractors and their defenders. When we meet this challenge, we see in the New Critics a more diverse, less strictly formalist movement than we find in the distorted version so often invoked by both sides of the debate.

It may be of some service to us, as we attempt to wipe several decades worth of preconceptions off our critical lenses, to remember that the New Critics never actually saw themselves as locked in battle with the nascent forces of deconstruction, cultural studies, and identity politics... New Critics weren’t a rearguard action, but an advance force, launching raids against a host of other critical movements. Although the New Critics are often taught at the beginning of the literary theory seminar, as a kind of point of origin for modern literary theory, they didn’t emerge in a vacuum, but in a battlefield. The New Critics turned their critical artillery, first and foremost, on early-twentieth century academic scholarship, which they saw as a dull and dutiful business of the establishment of context: all dusty philology and dry bibliography. The New Critics fought, too, against the impressionistic criticism found in the journalistic world.... But it wasn’t just against the practices of the academics and the journalists that the New Critics struggled. Although all-but-forgotten now, colossi of literary theory like Max Eastman and Irving Babbitt towered over the literary scene in the early twentieth century, their tomes promulgating psychological and moralistic approaches to literary study, respectively. And the 1930s wasn’t only the period in which the John Crowe Ransom, Allen Tate, Robert Penn Warren and company, their Vanderbilt apprenticeships behind them, set out to reinvent criticism: it was also time haunted by the specter of Marxist criticism, the decade of Christopher Caudwell and the young George Orwell, voices heard on both sides of the Atlantic. Emerging as it did in the context of more established, competing theories, it’s understandable that the New Criticism put polemical emphasis on its differences from historical, impressionistic, moralistic, and political approaches to literature. But we do a disservice to the New Criticism if we see it as turning its back on the insights offered by these approaches. Indeed, the goal of the New Criticism, more often than not, wasn’t to spurn history, politics, ethics, or psychology, but to bring these things back into contact with the specific formal qualities of the literary work. Synthesis, rather than aesthetic separatism, was the main project, a fact too often overlooked by both the defenders and the detractors of the New Criticism.

In other stuff-I-wrote-appearing news, the British journal Tears in the Fence features a dialogue between the present humble blogger and rising literary impressario Adam Fieled.

Posted by Archambeau at 4:15 PM No comments: