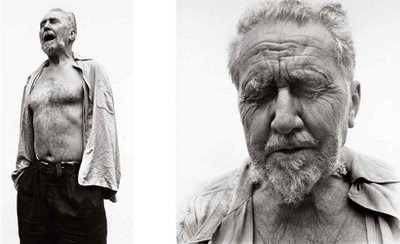 Those are probably the best-known lines of Ezra Pound's "Canto 81." The passage lodged itself in my head when I was a modernism-obsessed undergraduate, and I still sometimes wake up with those lines echoing in my ears. Canto 81 is one of the Pisan Cantos, written after Pound had been captured by the American army in Italy, and was being held in a detention cage, uncertain of his fate but fearing the worst: that his pro-Mussolini radio broadcasts would soon see him swinging from a hangman's rope. So the desperation in those lines is real enough: Pound, here, is a man looking at the end, and wondering what, when we stare into the abyss, remains for us.

If the sentiments are real, though, the diction is stilted and affected (although very much of a piece with the mixed-diction and quotation-filled texture of The Cantos and, indeed, of Pound's work as a whole). Why such a strange, non-contemporary diction? Of course there have been plenty of times and places when poetry has been written in archaic diction: Dante, for example, was considered an oddball for not writing in the archaic Latin language, and had to defend his use ofthe contemporary Italian language in De Vulgari Eloquentia — a treatise, ironically enough, written in Latin. But why this particular instance of a poet writing in such an idiom? It was by no means the only convention out there: it certainly wasn't the idiom of William Carlos Williams.

One explanation lies in Pound's education. Pound was part of the first generation of American poets in which significant numbers of poets were the products of graduate school. Of course graduate study in language and literature was different in the early years of the twentieth century than it is now: it was dominated by philology, the tracing of linguistic evolution, often in literary texts. There's a whole interesting history of how philology became the dominant mode of literary study in the late nineteenth and early twentieth century (Gerald Graff's Professing Literature tells the story well), much of it having to do with nationalism and with the kind of disciplinary-legitimacy anxiety that has been the fate of English and the humanities in general ever since the rise of the research university model. But none of that matters, here, I suppose: the important thing is that Pound enters into literature via a specific academic path, and gets a very particular perspective on literature: historical and linguistic-centered. It's quite a bit different than, say, William Blake's point of entry (Evangelical Protestant Bible study) or Alexander Pope's point of entry (Greek and Latin classics). If Blake's mythical, prophetic imagination can be traced to his educational roots, and Pope's neoclassicism to his, we can just as surely find in Pound's education the roots of his own polyglot, historical, found-text-obsessed poetic, and the source of his ease in feeling authorized to write in archaic-sounding language. An attachment to philology could also explain Pound's early attraction to Browning, and the faux-archaic speech of his dramatic monologues.

Pound's early investment in the cultural past can also be seen as contributing to his particular brand of modernism. He, like Eliot, wanted to preserve the past, to (as he famously put it) "make it new." It's a project of cultural rescue, quite different from, say F.T. Marinetti's Futurism, which called for the destruction of Venice and all its statuary. (Nationality has got to be significant here, too: Pound and Eliot came from a country feeling a kind of history-deficit, while Marinetti's generation felt oppressed by the enormous cultural achievement of Italy). Pound, in a way, isn't a radical, but a kind of reform conservative, looking to rejuvenate rather than eject (or, for that matter, mummify with reverence) the cultural heritage.

Of course, reform conservatism depends on a sense that the past and the present can be made to accommodate one another. When the conservative mind comes to see the present as having moved too far away from what is valued in the past, a strange mutation occurs, and he becomes what Klaus Epstien, in his monumental study The Genesis of German Conservatism, calls a "revolutionary conservative." This is a category as paradoxical as it sounds. Normally, conservatives want to preserve some elements of the past, or of the status quo (when the status quo is capitalistic, this gets weird, since capitalism depends on an ongoing process of creative destruction, but that's another story). The revolutionary conservative feels his cause is so lost he needs a radical program to wipe away the present and restore what he imagines to have been the best elements of the past (of course there really is no restoration — the thing about the past being that you can't get there from here). When Pound turned to Mussolini and Fascism, I'm pretty sure it was out of a deep-seated conservative disposition that had become terribly alienated by the present age. It's tragic stuff, really.

There's another element of Pound's characteristic means of addressing himself to the reader that isn't connected to his educational background, at least not directly: his sense of himself as our instructor. As Gertrude Stein famously, and snarkily, put it, Pound was "a village explainer, excellent if you were a village, but if you were not, not." Stein, of course, was full-on committed to an experimental agenda, in which formal innovation was central, and instruction seemed kind of quaint. But Pound was attached to an older model of the poet. Someone like Stein didn't really expect a big audience, and she certainly didn't expect for her words to echo in the halls of power. But Pound, naively, wanted something like the Victorian relation of poet to audience. There have been a number of really fine studies on the relation of the Victorian writer to audience (the best of them, Stefan Collini's Public Moralists doesn't much deal with poetry, but the points he makes there transfer to certain Victorian poets, especially Tennyson. Believe me here: one of the main points I'm trying to make about Tennyson in the book I'm writing is really just a transposition of Collini's ideas to Tennyson's work). Long story short, Collini's argument is that, in the Victorian period, there was a kind of intimacy between important figures from realms like politics and (certain) literary people: he points out how the Athenaeum Club, founded for the power-elite, took to admitting writers on a regular basis (there's a list of prominent writers admitted to the Athenaeum, by the way, and it's well worth a look). This allowed for a kind of co-opting of writers by the power elite (think of how Tennyson became the trumpeter of Queen and Country), and allowed writers to think of their work as being heard, as having a public role, as mattering to those in power. In such a context, writers didn't emphasize form: they became moralists, seeking to ameliorate the excesses of the system (but never to challenge the system directly — this could lose them the indulgence of the power elite).

Pound certainly wanted a situation like this: even near the end, when he was locked up in St. Elizabeth's Hospital, he was fond of preaching economic policy, and once sent a visiting Senator's wife home with a copy of The Unwobbling Pivot as a guide to politics for her husband. But the discursive situation of poetry had changed: those in power were no longer rubbing shoulders with poets at the club, and poets were not often obsessed with being the kind of public moralists Collini described. If there's a way Pound's education comes into play here, it's this: the very existence of graduate programs like his on a large scale was a sign of the increasing specialization of knowledge, of the growth of a technocratic world where government goes its way and literature goes off on its own path. Pound, the product of this new world, longed for the older one, and wrote as if he were in it, becoming shriller and shriller as time went by. (I wish I could remember the name of the critic who wrote that Pound "overestimated the relevance" of his kind of literary knowledge to the political crises of his time — this critic, whoever he is, is the perfect product of our world, where knowledge is rigidly categorized). Anyway: in this instance Pound's education isn't so much an influence on him as it is a symptom of a cultural condition he didn't fully recognize, and would never fully accept. And for all the talk of poetry and politics now, and of speaking truth to power, I think by and large most poets have, at some level, accepted the new situation. I mean, I can't imagine John Ashbery or Ted Kooser or Jorie Graham actually expecting that the world of power would take their ideas on social policy seriously. It'd be delusional if they did. And would we really want them to operate as if they did expect this? It could drive them as crazy as it drove Pound, and I don't think we want to see any of them locked away in St. Elizabeth's.

Posted by Archambeau at 1:59 PM No comments: