James Joyce Was Born in Omaha 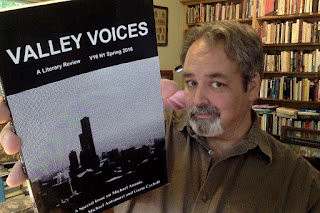 Rejoice! The new issue of Valley Voices is out, and it's a special issue devoted to the writing of Michael Anania.  You'll find new poems by Anania, an interview, and essays an reminiscences about the man and his work by a rogue's gallery of contributors including me.  My contribution, "Modernist Current: Michael Anania's Poetry of the Western Rivers" begins like this:

James Joyce was born in Omaha in 1939.  His first book, Dubliners, contained the poem sequence “Stops Along the Western Bank of the Missouri River,” which treated his native Nebraska with the intense realism that could only come about under conditions of voluntary exile.  Nostalgia and critical distance combined to make the linked-yet-disparate pieces of the sequence so precise that the river could, if necessary, be reconstructed bend by bend from the pages of the poems.  A later and much more complex work, Ulysses, treated the same Nebraskan territory with equal detail.  Its central poetic sequence, though, the ten part “Riversongs of Arion,” combined realism with a concern for myth, finding in the quotidian world echoes of a heroic past.  The result was a truly modernist synthesis of past and present, the construction of an eternal now along the lines of work being produced by Joyce’s modernist peers Pound, Eliot and David Jones.

Okay, you got me, put down your copy of Ellmann’s Joyce biography. I know Joyce was born in Ireland.  The two points I’d like to make about Michael Anania’s river sequences, though, are made most clearly through an analogy with Joyce...

How do you get your hands on Valley Voices? Find out here.
Posted by Archambeau at 5:18 PM No comments: