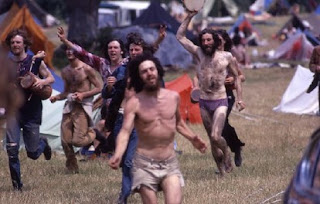 Good Lord — I'm it! I've been tagged as a "thinking blogger" by Steve Burt.

It was Ron Silliman who tagged the unsuspecting Professor Burt while Steve was sweating innocently away in an attempt to wedge his 40-volume set of the letters of Randall Jarrell (vaorium edition, with annotations both explicatory and exculpatory) into an old Tivo box in preparation for his upcoming Steinbeck-like trek from the central plains to Harvard (or am I misremembering The Grapes of Wrath?). Silliman himself was tagged in turn by Ashraf Osman, who was tagged (I think) by Wallace Stevens, who was in his turn tagged by Alfred Lord Tennyson, who was tagged by the zombified hand of an undead Homer while giving a poetry reading at Heinrich Schliemann's archeological digs. Since Homer was tagged by poets of the early Sumerian oral tradition, the ultimate origin of the tag-chain lies lost in the mists of literary prehistory, although I suspect a time-traveling Frank O'Hara may be behind it all in the end. I won't know for sure unless and until the grant money comes in for further research.

Part of me thinks this whole blog-tag phenom is just a schoolyard game. The other part thinks so too. But neither part minds. Who doesn't miss the schoolyard, where one could whip a big red dodgeball at one's peers with impunity, aiming for face or crotch with velocities approaching mach one? I mean, what wouldn't you give to make that sort of thing a regular part of all faculty meetings? (Imagine here Archambeau supine upon the floor, mercilessly pelted by his colleagues, who wield a mace-like untethered tether-ball).

So. It looks like I'm supposed to tag five others. So here's who I'd chase down across the asphalt-and-wood chip landscape of the virtual schoolyard. Only in the virtual world would I, puffing like the bookworm/hedonist I am, be able to catch even one of them and shout "Tag! You're it — a thinking blogger!" 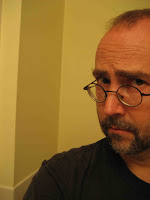 Posted by Archambeau at 10:35 AM No comments: