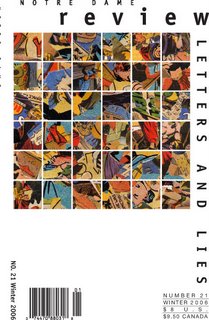 The latest issue of the Notre Dame Review has made landfall in the nearby harbor, and from the hold of that mighty vessel come poems and prose both rich and strange. There's a short story by Ihab Hassan (whose Paracriticisms first turned me on to PoMo back when I picked up a copy at a garage sale when I was in high school (dad was an art prof, so I grew up in a university ghetto, and the books of the moving-because-they-didn't-make-tenure crowd were often on sale at a deep discount). Also poems by Albert Goldbarh, Tom Raworth (and yeah, he did the cover too), Joe Francis Doerr (the ND Review and Salt seem to have a lot of overlap lately), and the crazy-good and utterly unknown Jere Odell, who someone's got to put on the radar soon. And John Peck, writing on Christopher Merrill with his usual 400-pound-per-square-inch perspicacity.

My own piece in the issue, "Gravel and Ghosts," treats the historcial poetics of Kevin Prufer and Albert Goldbarth. Since all my thinking about them began on this blog, I'm posting the first two paragraphs of the ND Review piece. They go something like this:

If you catch me on a bad day and ask me about the state of American poetry, you’ll probably get an earful of ill-humored grumbling about the enervating predominance of two kinds of poetry. “On the one hand,” I’ll gruffly opine, “we’re still swamped with the poem of the semi-confessional backyard epiphany.” You’ll probably tune out after ten minutes or so of examples drawn from recent contest-winning books, and your eyes will glaze over during my comparison of Charles Altieri’s notion of the Scenic Mode of Poetry and Ron Silliman’s idea of the School of Quietude. You won’t need to hear the finer points of their theories, because you already know what they’re talking about: poems that focus on the exquisite sensitivity of the speaker, caught in a meditative moment in an ordinary American life. Just as you think you’ll be able to slip out the back door of the campus coffee shop, though, I’ll start in on my other bête noir. Citing examples from the fat, respectable university quarterlies as well as any number of weird little online magazines, I’ll grumble and gripe about the linguistically hazy, indeterminate, pseudo-sophisticated nonsense verse that has emerged from the wreckage of language poetry. “Post-avant, they call it!” I’ll shout, alarming the people lined up by the cappuccino machine, “but Faux-avant is more like it! Poems about nothing, doing nothing that hasn’t been done before! This emperor has no clothes, and we’re all too cowed by Charles Bernstein-quoting associate professors to say so!” This outburst will leave me a little sheepish, and I’ll no doubt appreciate a few kind words from you before you make your getaway and your mental note never to ask me about the state of poetry again.

If you caught me a few weeks ago, though, when Albert Goldbarth’s Budget Travel Through Space and Time and Kevin Prufer’s Fallen from a Chariot landed on my desk, you’d have found me in a considerably better mood. Both poets find grist for their creative mills outside of those usual stockpiles of contemporary American poetry, sensitive autobiography, and sophomoric wordplay. Both Goldbarth and Prufer turn to the long-ago and the far-away as means of understanding contemporary experience, and their poetry is much the richer for this xenophilia. Both seek out facts, images, and anecdotes from history, and both interrogate contemporary experience through the examination of the exotic historical other. The two poets use the past to interrogate the present differently, though. Goldbarth is an omnivore, devouring anything he sees, hears, or reads, absorbing it, ascribing significance to it, and using it to understand contemporary experience. Historical anecdotes are the chunks of gravel in his gullet, and he uses them to digest the often-difficult world around him. For Prufer, the past is more elusive. While it offers parallels to contemporary experience, those parallels are often mysterious in nature. The past doesn’t explain the present, it haunts the present. Images from poems set in the past recur in poems set in the present, but the full meaning of the images remains undisclosed, as does the meaning of the recurrence. Indeed, the recurrence of these mysterious, melancholy, and beautiful images is, in some sense, their significance: the sublime unknowability of the world endures, the ghosts shimmer into appearance but cannot be grasped.

Of course the cartoonishly-caffinated Archambeau depicted above is a bit more of a believer in the avant/quietude dichotomy than is the sedate and mild-mannered Archambeau who reads quietly in his study of an evening, but the real me makes lousy reading. Anyway, some of the issue is up online, along with bits and pieces of bonus material.

Posted by Archambeau at 1:15 PM No comments: