A Monkey on a String, or: the Heart of Dutchness 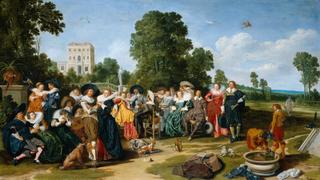 Back in the eighties and nineties, when the world was young and English departments awash with French cultural theory, a good friend of mine invented the term "Eurojive." He knew we needed a word to describe a genre of writing launched by a thousand "naturally the foundation will bear your expenses" junkets to the USA by visiting European intellectuals. Such intellectuals, wild-eyed at what passed as their newfound American celebrity, would typically walk off the jetway into the arms of a waiting, star-struck grad student. They would then be driven around for a few days, giving talks, meeting the local professorial fauna or tame literati, dine out a little, demand to see a shopping mall or perhaps a casino, and fly back to the École Normale Supérieur or, more likely, one of the many Écoles Normale Inférieures. They would then churn out on essay or, if ambitious (and these were ambitious times) a slim book purporting to explain America. Remember Jean Baudrillard's America? Either we must believe the man was a genius beyond all measure, able to hit the tarmac in Vegas, sniff the air, and grasp The American Soul in All its Complexity and Contradiction, or we must believe the man was something of a jackass. Take your pick. And Eurojive lives on even unto the present day, recently embodied in Bernard Henri-Levi's series of essays for The Atlantic, in which he is driven around more-or-less in the path of Tocqueville (ancestor of all Eurojive), and tells us all about who we are and what we mean. (I nearly knocked HBL over once, but it wasn't a critical comment on his work: I was late to meet my wife at a cafe near the Sorbonne and wheeled my bulky American self around the corner at great speed, having to pull up short lest I knock over the man as he opined into an adoring TV reporter's microphone).

Undeterred by my own skepticism about the general veracity of Eurojive, I've decided to lay down an inverse version of the discourse, and define the nature of Dutch culture on the basis of no more than my own recent experience hanging out in Amsterdam this summer. Having never left the city, having learned no Dutch, having met approxinately 16 of the country's sixteen million inhabitants, I nevertheless hazard this assertion: I have seen into the heart of Dutchness, and it is like a monkey on a string.

The key to the Mysteries of the Dutch lies in plain view in the Rijksmuseum. It is Dirk Hals' painting "The Fête Champêtre," or, more specifically, the figure at the front of the painting. Like a lot of seventeenth century Dutch paintings, it presents us with a group of people. I'm sure there's nothing particularly new or even interesting about the observation that the Dutch emphasis on the group portrait, or "conversation piece," is closely connected to the nature of power in the Netherlands of the seventeenth-century: oligarchic in an age of absolute monarchs. It was a way of examining group dynamics and group power. (Many paintings of the period, especially Vermeer's, give us private spaces punctuating, or being punctuated by, public spaces, and I'm sure this was a way of thinking about the new relations of personal and public power in a mercantile society).

But here's the interesting thing about Hals' piece: it embodies one of the central concerns of capitalist societies, right at the moment when the Dutch are inventing modern capitalism. On the one hand, the painting is all about the rich clothes, conspicuous consumption, and general full-on yeee-hawness of the laughing, drinking, flirting partiers. On the other hand, front and center is the monkey on a leash. What's that? How'd he get there? And who let the leash go? Is the monkey going to wreck the party? Will he soon hurl his feces hither and yon among the seventeenth-century glitteratti? Irrelevant questions, all, class. The import of this particular simian is symbolic: he is part of a old tradition of monkey iconography in European art, dating back at least to the middle ages, in which the monkey is used as a cautionary figure of appetitive excess. Sex, food, drink, fun: all, all will make a monkey out of you, and the little guy makes his appearance in many artworks to drive the point home. Here, though, the monkey is sort of leashed and sort of unleashed: no one holds the end of the leash, which is draped or perhaps tied to a chair. Moreover, while the monkey is positioned in the front and near the center, the sheer bulk and brightness of the partiers makes for a real tension. Who has the power? Is consumption grand and fun and free, or must we remember that icon of medieval contemptus mundi, the monkey? The painting catches the moment when both Protestant-ethic self-denial andconspicuous consumption were coming into being as two sides of the same coin (a coin clutched in the fist of an Amsterdam merchant driving a hard bargain, or perhaps being flung easily down on the counter of a haberdasher by his spendthrift son). This tension seems central to Dutchness, not only because it finds its way into so many pantings from the great age of art in the Netherlands, but because it explains how Amsterdam can be simultaneously Europe's hash-bar crowded New Orleans and a city of bourgeois comfort, smugness, and propriety. Holland, a Dutch guy on the flight back to the States said to me, was too conformist for him — he'd moved to the Bay Area to get away from all that. Who am I not to believe him? But at the same time, I'd just taken a photo of a coffeehouse adorned with images of Gilbert Shelton's hippie icons, the Fabulous Furry Freak Brothers, which gave me a hunch as to what would be going on inside. So there it is: the Heart of Dutchness is the ambivalence between desire and restraint expressed through the image of a monkey on a string. You heard it here first, kids, Ameri-jive style.

Posted by Archambeau at 4:53 PM

New Review of Home and Variations

Jeffrey Roessner knows more about my poetry than I do. Read his review of Home and Variations and you will, too. Roessner is one of those readers who seems to have some kind of X-Ray vision.

Also, a decade or so ago Roessner played guitar in a band that had what I think may have been one of the best names ever, "I Buried Paul." It took me weeks to catch the reference.

Posted by Archambeau at 9:15 AM

Back in the USA and Griping About Silliman 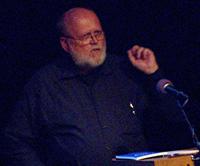 I'm back, I'm groggy, and I'm ticked off at Ron Silliman.

Ron's been blogging away about Christopher Middleton, at one point quoting a Middleton poem and saying "my take on this piece is that it reminds me of what Auden might have been had he actually been a good writer." He seems especially irked by what he calls the "absolutely normative narrative figuration" he imagines in Auden. I am tempted to put "[sic]" after the word "normative," since I don't think Silliman means that the "narrative figuration" prescribes anything, but rather that it follows forms that have been used by many others, and that one could argue are already implicitly prescribed by others. But this sort of half-assed throwing around of terms doesn't bother me too much, or I wouldn't be reading Silliman's blog at all. No, indeed.

The most irritating thing about this dismissal of Auden isn't just the wrongness of it. Nor is it the ideologically blinkered nature of the comment. The really irritating thing is the ignorance. I mean, the young Auden was working experimental veins of a kind that Silliman is generally sympathetic to. If one of Silliman's friends had written The Orators, he'd almost certainly have praised it extravagantly. I'd bet my whole collection of Hejinian first editions on it. (If you want to read an essay demonstrating that The Orators does not follow "absolutely normative narrative figuration [sic]", I suggest this one by Chris Jones, which is more interesting and far-reaching than the synopsis might lead you to believe).

One way to file Silliman's snark is as a generational matter. This easy dismissal, one could say, is old school langpo stuff, the product of a mind still dividing the world into absolute friend and absolute foe based on stlylistic shibboleths. Another way, though, would be to put it down to ignorance of British poetry, especially of British modernism, of which the young Auden was very much a part. A third way to file this is under irony: guys like Silliman have been dismissed out of hand because of what people who don't really know the range of their work imagine to be their limitations. I even did this once, years ago, on the Poetics list, and Ron quite rightly tore into me about it. But here's Ron, being just as unfair to Auden for reasons as illegitimate as those of his own knee-jerk detractors.

Lee Glidewell takes Silliman down for this at greater length than I, a hung-over, jet-lagged, cold-having derelict can just now.

Posted by Archambeau at 9:47 AM