American Poetry: The State of the Art 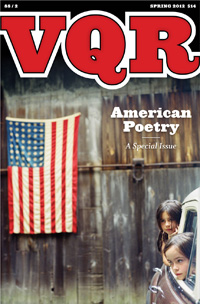 My essay "The State of the Art," about American poetry in 2012, is out in a special issue of VQR, along with a great selection of new poetry (from Kim Addonizio to B.F. Fairchild to Charles Bernstein) and essays on the state of poetry by a number of critics.  It's not up online yet, but the print issue is out and looks great.

Here's the beginning of my contribution:


The year is 1712, and the state of the art of American poetry is, in a word, provincial.  The best-known and best-selling American poem remains Michael Wigglesworth's The Day of Doom: A Poetical Description of the Great and Last Judgment, written some forty years earlier and currently in its fifth edition.  A bumpy, ballad-meter ride through Calvinist theology, it will remain popular for decades. When Francis Jenks writes about it in the Christian Examiner in 1828, he'll remind his audience how much this strange, homespun work once meant to our countrymen.  It was, says Jenks, "a work which was taught our fathers with their catechisms, and which many an aged person with whom we are acquainted can still repeat, though they may not have met with a copy since they were in leading strings."  It was, moreover, "a work that was hawked about the country, printed on sheets like common ballads," and it presented, in language often graceless but equally often vivid "the common theology of New England at the time it was written."

The Day of Doom represents a kind of poetry at the service of religion, written by men who do not consider themselves to be, first and foremost, poets. Wigglesworth, having turned down the presidency of Harvard, held the title "teacher at Malden Church in New England," and saw himself as a man of God who happened to write poetry, not as a poet who happened to believe in God.  When he died in 1705, there was not much by way of American institutions to support poetry, and his work found its way to readers through the primitive market for written works, carried by peddlers down the roads and river valleys of the land.

It goes on from there, looking at the state of the art in American and English poetry in 1712, 1812, 1912, and 2012, with a glance at the social and aesthetic circumstances behind the poetry.

Many thanks to VQR poetry editor David Caplan for commissioning the essay and editing the issue!
Posted by Archambeau at 8:41 AM 1 comment: