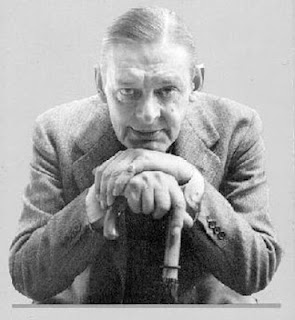 I’ve been doing some research on T.S. Eliot’s brief journey through aestheticism on his way to becoming a religious poet and a moralist with a reactionary critique of modernity—and I can’t think of any clearer demonstration of the change in his poetry than the contrast between one of his most famous Christian poems, “Journey of the Magi,” and a very early untitled poem, known in Eliot circles as “At Graduation 1905.”

Eliot wrote the latter poem, an ode, when he was 16 years old, and read it at his graduation from Smith Academy.  His greatest literary influence at the time was Edward Fitzgerald’s famous translation of an 11th century Persian work, The Rubáiyát of Omar Khayyám.  Fitzgerald’s rather free translation had attracted a cult following in certain English literary circles ever since it appeared in 1859, and had gone through several expansions and editions over the course of the late nineteenth century.  It was particularly popular in Pre-Raphaelite circles, and later among the aesthetes of the Rhymer’s Club in the 1890s.  One can see why: it was a kind of antidote to the moralistic poetry of such Victorian heavyweights as Tennyson and Matthew Arnold.  Here’s a fairly typical stanza, in which we are urged to see the world as temporary, as without any great moral meaning:

The Worldy Hope men set their Hearts upon
Turn Ashes—or it prospers; and anon,
Like Snow upon the Desert’s dusty Face,
Lighting a little hour or two—is gone.

“The Charge of the Light Brigade” it ain’t.  Instead of duty to Queen, country, and God, we find a world almost existentially absurd, a world in which the momentary fleeting impression of beauty is what matters.  Bohemians like Dante Gabriel Rossetti loved Fitzgerald’s Rubáiyát, and it anticipates both Pater’s aestheticism and the whole emphasis on a poetry of fleeting impressions, loaded with imagery of transience, that we get with Oscar Wilde, Ernest Dowson, and other 1890s types.

Fitzgerald certainly came as a relief to the young T.S. Eliot, who had grown up in an oppressively strict and moralistic family milieu.  When I read his recollections of encountering the Rubáiyát, I thought immediately of John Stuart Mill’s recollections of first encountering Wordsworth and the “culture of the feelings” after his narrow, Utilitarian upbringing.  Here’s Eliot:

I can recall clearly enough the moment when, at the age of fourteen or so, I happened to pick up a copy of Fitzgerald’s Omar which was lying about, and the almost overwhelming introduction to a new world of feeling which this poem was the occasion of giving me.  It was like a sudden conversion; the world appeared anew, painted with bright, delicious, and painful colors.  Thereupon I took the usual adolescent course with Byron, Shelley, Keats, Rossetti, Swinburne.

There’s reason to wonder just how Eliot found a copy “lying about,” since he grew up in a household where even Tom Sawyer and Huckleberry Finn were banned, and the Rubáiyát is both agnostic and (on occasion) just a bit racy.  But I digress.

We go; like flitting faces in a dream;
Out of thy care and tutelage we pass
Into the unknown world—class after class,
O queen of schools—a momentary gleam,
A bubble on the surface of the stream
A drop of dew upon the morning grass.

“Graduation addresses,” says Eliot biographer James E. Miller Jr., “are generally supposed to be inspirational, saying, in effect: now go forth and live a life of great achievement and fulfillment.  Eliot, therefore, must has startled his listeners.”  Indeed!  This is a poem without moral exhortation, without homiletic reassurances.  This is a poem in which fleeting moments of beauty are the best for which we can hope—an aesthete’s poem.

Two stanzas from the poem offer an early version of one of Eliot’s recurring motifs: the return to a place long left behind, and the difference felt by those returning (the most famous instance is in “Little Gidding,” where Eliot writes “We shall not cease from exploration. And the end of all our exploring will be to arrive where we started and know the place for the first time”).  Notice the alienation felt by those who return to Smith Academy after graduation:

Standing upon the shore of all we know
We linger for a moment doubtfully
Then with a song upon our lips, sail we
Across the harbor bar—no chart to show,
No light to warn of rocks which lie below,
But let us put forth courageously

As colonists embarking on the strand
To seek their fortunes on some foreign shore
Well know they lose what time shall not restore
And when they leave they fully understand
That though again they see their fatherland
They there shall be as citizens no more.

We don’t get much by way of an explanation for this alienation—and this itself is significant.  Eliot, at 16, gives us a sense of separateness without any specific moral attached to it.  Those who return are no longer at home in the place they’ve left, but we’re not given any moral to attach to this story.  It’s not that the world has corrupted them, and they must touch base with the virtues embodied in the old school.  Nor is it that they’ve become Real Men, who must put aside childish things and get back out into the jungle where they compete with one another to push back the frontiers of darkness and spread the light of empire.  What we have is a mood, without a moral: the very stuff of impressionism and aestheticism.

Flash forward to 1927, and we find Eliot touching on his ‘return’ motif, but quite differently.  Eliot was now 39 years old, had settled in England, and had just been baptized and confirmed in the Anglican Church.  It was a move that rattled his deeply Unitarian family back in the U.S., and that puzzled his English friends, who tended to be secular intellectuals.  When Eliot went to visit I.A. Richards at Cambridge, for example, Richards and his friends were surprised to find Eliot carrying a “large, new, and to us awe-inspiring Prayer Book,” and were a bit flummoxed by the demands of Eliot’s faith, being “suddenly made much aware of our total inability to advise him on (or even discuss) the character of the various Services available on Sunday mornings.”

This was a new Eliot, and one of the poems that he published in 1927, “Journey of the Magi,” captures both his sincere Christian commitment and his sense of alienation.  After recounting the travails of the magi on their way to the nativity, and loading the poem up with imagery foreshadowing the crucifixion, the poem concludes with the return of one of the magi to the kingdom he’d left behind:

All this was a long time ago, I remember,
And I would do it again, but set down
This set down
This: were we led all that way for
Birth or Death?  There was a Birth, certainly,
We had evidence and no doubt.  I had seen birth and death,
But had thought they were different; this Birth was
Hard and bitter agony for us, like Death, our death.
We returned to our places, these Kingdoms,
But no longer at ease here, in the old dispensation,
With an alien people clutching their gods.
I should be glad of another death.

This is the first point in the poem where we’re made aware of the speaker’s silent interlocutor, a scribe figure to whom he dictates his accounts.  And of course, since the accounts we have of the journey of the magi are scriptural and without any mention of the magi's return, there’s a suggestion that the speaker’s words, which he twice insists be recorded, have not been recorded— that they've been suppressed by someone who did not want such discouraging comments to be put in front of the faithful.  And the comments are discouraging, telling us of the pain of conversion, of how one’s rebirth as a Christian is also a death of one’s former self.  The nature of the pain is significant: it comes in the form of alienation from one’s people.  One returns, as one does in Eliot’s graduation ode, to find that one no longer belongs.  Unlike in the graduation ode, though, there’s a specific moral to the story: though conversion is difficult, and though it leads to a rift with those one loves (we may think here of Eliot’s shocked family, or of his puzzled friends at Cambridge), conversion is not to be reversed.  The speaker suffers from his sense of difference, but it’s important that he never raises the possibility of re-conversion: he’d rather have “another death”—a literal one— than that.

Set side by side with the graduation ode, “Journey of the Magi” looks very much like a moralist’s poem.  Its ethos is one of religion, and poetry at the service of religion, rather than aestheticism, and the appreciation of the passing moment as the highest of goods.  If Eliot’s graduation ode was a poem of moments, “Journey of the Magi” aspires to be a poem of the intersection of the timeless with time.