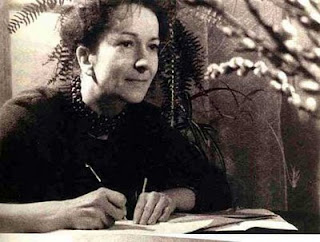 Since the death of Wisława Szymborska a week ago, the Nobel-winning Polish poet has been memorialized countless times.  Generally, the media tributes have been quite accurate, although there's been something of a tendency to make her sound more grandmotherly than seems right, with Newsweek calling her an "old Polish poetess" and The New York Times calling her "gentle and reclusive."  This kind of characterization takes the edge off her, and hides so many things about her poetry, which often cast a cold eye on tragedy and the darker patches of history.


This, though, isn't the kind of "misremembering" I have in mind.  Instead, I'm thinking of my own misremembering of a Szymborska poem years ago.  I'd read the poem, "The End and the Beginning" in Clare Cavanagh's translation in The New Republic, and loved it immediately.  In the weeks that followed, I'd run the poems lines and images through my mind, or talk about them to friends, urging them to have a look at Szymborska's work.  A few months later, when the book containing the poem came out, I rushed down to the Seminary Co-Op Bookstore by the University of Chicago to get a copy.  On the train back home, I read the poem again, and realized I'd remembered it incorrectly, in essence making my own poem out of the poem Szymborska had written.  The only thing for it was to write my version of the poem, which had evolved, by now, not only into a warped version of the original, but into a poem about misremembering, and about the conversation different poems can have with each other.  Here's Cavanagh's translation of the Szymborska poem:

The End and the Beginning

After every war
someone has to tidy up.
Things won't pick
themselves up, after all.
Someone has to shove
the rubble to the roadsides
so the carts loaded with corpses
can get by.
Someone has to trudge
through sludge and ashes,
through the sofa springs,
the shards of glass,
the bloody rags.
Someone has to lug the post
to prop the wall,
someone has to glaze the window,
set the door in its frame.
No sound bites, no photo opportunities,
and it takes years.
All the cameras have gone
to other wars.
The bridges need to be rebuilt,
the railroad stations, too.
Shirtsleeves will be rolled
to shreds.
Someone, broom in hand,
still remembers how it was.
Someone else listens, nodding
his unshattered head.
But others are bound to be bustling nearby
who'll find all that
a little boring.
From time to time someone still must
dig up a rusted argument
from underneath a bush
and haul it off to the dump.
Those who knew
what this was all about
must make way for those
who know little.
And less than that.
And at last nothing less than nothing.
Someone has to lie there
in the grass that covers up
the causes and effects
with a cornstalk in his teeth,
gawking at clouds.
And here's the poem I ended up writing in response, a kind of sampling-plus-morphing of the original, along with reflections on the nature of misremembering (it's in my book Home and Variations):
Misremembering Szymborska
I read your poem in a magazine, the one about how
after every war, someone
has to tidy up, about how,
as years trudge on with shovel and with trowel,
bridges are rebuilt, windows glazed, doors set back
into their jambs, until someone,
propped broom in an arm's neat crook, a hand-back wiping
at his brow, tells how it was to a nodding neighbor, until
the task-bound crowd of a rebuilt city finds such talk
a little boring,
until those who were there
are gone, and those who knew them, until, at last,
someone lies in the grass, over all the old and rusted arguments,
"a corn stalk in his teeth,
gawking at clouds."  I read it, there, but
remembered it differently.  Somehow
in the tired and task-bound wearied mind those final,
placid, resting limbs
became a body in the earth, not on it,
a corn stalk growing from that place in which it lay.
I see your poem now, again.  "The End and the Beginning,"
and know I've carried my mistake for months.
That soldier I remembered — that's what he must have been,
that body under earth — he would have dreamed
of days spent gawking, on a hillside, at the clouds.
Perhaps he fought for just such days, that he should have them, perhaps
that dream is where he lingers even now.
Perhaps he can lie beneath your dreamer, a rightness, there,
each in his way the other's end.  Perhaps, too,
we could say my poem lies in the grass of your poem's dreaming,
forgetful, pulls at cornstalks, gawks at sky.
Posted by Archambeau at 1:44 PM 4 comments: