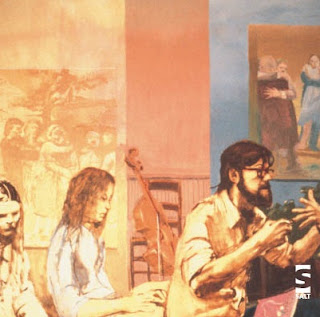 Someone at Berkeley has had the wisdom to put their "Lunch Poems" series up online in both audio and video format — I discovered this via the brand new John Matthias reading, his first on the west coast in over two decades. He's ably introduced by Robert Hass as a poet of "inventive and assured imagination," who keeps inventing ways of making poems and seeing the world. I think this is fair: Matthias has gone through at least three incarnations, first as a kind of Duncan/Pound angry young man, writing radical poems about language and power, and railing against the prison house of language. Then there's the Bunting/Jones Matthias, a writing of book-length geographical poems. And now there's a third Matthias, a poet who feels totally original to me. This period began, I think, around the time John made the switch from Swallow Press to Salt. The Salt Matthias is someone who's invented a new way of understanding, among other things, the way information technology has changed who we are and how we experience the world and the past (see his Working Progress, Working Title for starters.

In the reading John reads from his new book, Kedging (not to be confused with another poet's Ketjak). If you want to hear the music in his work, listening to the reading is a great place to start.

Much to blog about lately — a panel on creative writing programs and English departments at the ALSC last weekend, where I hung out with Steve Burt and Don Share and ran into Reg Gibbons; some good speculations today at lunch with Ray Bianchi about the para-academic future of poetry, and more. But today all I want to do is watch the podcast of Matthias' reading.

Posted by Archambeau at 12:30 PM No comments: