Return to the Supermarket: Sentimentalist Poetics Then and Now

Many things to blog, including the John Matthias retirement gathering at Notre Dame and a great show of Don Reichert's new works at the Canadian Embassy, but first, a moment of astonishment. As I was thumbing through an old issue of the NYRB, I turned with a certain ghoulish pleasure to Christopher Benfey's review of Helen Vendler's latest collection of essays. Oh boy, I thought, here we go: the usual obsequious east coast praise for the Queen of Harvard. I was all set to take a kind of perverse pleasure from witnessing the act of intellectual abasement. Oh, how wrong I was. Not only did Benfey leaven his praise with some actual criticism of Vendler, but it seems she's actually made a good point -- or almost made a good point -- about Walt Whitman. Let me explain.

The book Benfey reviews, Poets Thinking, has a chapter on Whitman that looks like it may have come close to the truth about the sage of Camden. Vendler sets out to "rescue" Whitman from charges of primitivism by old-school guys like Thoreau (who said of Whitman "it is as if the beasts spoke") and Santayana (who found in Whitman a "wealth of perception without intelligence"). She observes that Whitman not only registered detail on his retinas, he also thought, and that this thought found its way into the poems in a reprise-like structure, in which a scene is presented first as a "solely transcriptive" retinal record and then as an intellectually processed record. Let's check it out, shall we? Here's the example Benfey takes from Vendler's book, Whitman's poem "Sparkles from the Wheel." It begins with a senses-only presentation of a knife grinder:

Where the city's ceaseless crowd moves on the livelong day,
Withdrawn I join a group of children watching, I pause aside with them.
By the curb toward the edge of the flagging,
A knife-grinder works at his wheel sharpening a great knife,
Bending over he carefully holds it to the stone, by foot and knee,
With measur'd tread he turns rapidly, as he presses with light but
firm hand,
Forth issue then in copious golden jets,
Sparkles from the wheel.

Right. There's the unprocessed description. But here's the follow-up:

The scene and all its belongings, how they seize and affect me,
The sad sharp-chinn'd old man with worn clothes and broad
shoulder-band of leather,
Myself effusing and fluid, a phantom curiously floating, now here
absorb'd and arrested,
The group, (an unminded point set in a vast surrounding,)
The attentive, quiet children, the loud, proud, restive base of the
streets,
The low hoarse purr of the whirling stone, the light-press'd blade,
Diffusing, dropping, sideways-darting, in tiny showers of gold,
Sparkles from the wheel. 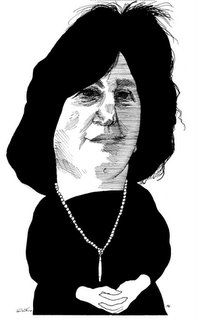 For Vendler, this shows that Whitman is a thinker of sorts: he takes the sense-or-retinal scene and adds to it a humanizing intellect (a "human response" added to a "perceptual registration," says Vendler). He does this by presenting the man as "sad" (an interpretation) and so forth. Okay. Yeah. Vendler's right here, and she's actually done a service to poetry by pointing out that this pattern is to be found everywhere in Whitman's poetry (note, though, that this service does not come close to cancelling out Vendler's disservice to poetry in helping Jorie Graham get Seamus Heaney's old job at Harvard -- Jorie Graham! The unholy fusion of the worst of Iowa and the worst of Buffalo! The muddle-headed mistress of mediocrity! Oh, her vagueness and pretence! Her giving-of-prizes-to-friends, her writer's-retreat realpolitik! Holy Christ! But I digress...). Here are some more examples, which again I lift from Benfey's quotation of Vendler's quotation of Whitman:

The little one sleeps in its cradle,
I lift the gauze and look a long time, and silently brush away flies with my hand.

The youngster and the red-faced girl turn aside up the bushy hill,
I peeringly view them from the top.

Okay! Yes! There it is: retina first, and then something more processed by the mind. But I'm not at all sure Vendler's gotten to the bottom of things, unless she does something important that Benfey doesn't mention (possible -- but I can't bear to read another of her books. The one on Shakespeare nearly killed me -- as did my Shakespearian colleague, when he saw me with it and called it a scandal for its historical ignorance). Here's the thing: it isn't so much that Whitman is thinking. I mean, "that guy looks sad" isn't really much of a thought -- hell, I think my neighbor's dog cogitates thusly when he sees me come home from a particularly trying faculty meeting. It is that he moves from a sense-record without any trace of his own filtering personality to a record filtered through the presence of the self. This isn't intellection so much as it is Romantic sentimentality -- as described (insert here an academic throat-clearing) -- by Schiller.

Schiller has loomed large in my intellectual life, and his essay "On Naive and Sentimental Poetry" has been big in my theory seminar (we get to Barthes “The Death of the Author” via Jung’s “On the Relation of Analytic Psychology to Poetry” and sometimes Breton’s “The Automatic Message,” and we get to those essays from Schiller). While I was googling around looking for a link to an English version of the essay (no luck, folks), I was surprised to see that the composer John Adams, who likes the essay, describes it as “a once-influential essay from 1795 which has by now been all but forgotten.” Aw, crap. It deserves to be read, if only to show grad students that sophisticated literary thinking didn’t begin in 1968. And now, since I can’t find an online copy, I’m forced to choose between running up to campus to get my copy, or quoting from Adams’ program notes, where he quotes Isaiah Berlin’s merely adequate summary of the essay (which a colleague of mine in German described as “the jewel in the crown of nineteenth century German criticism,” which is a hell of a claim). I have no desire to hit campus only a day after graduation, so here’s a paragraph of Adams/Berlin on Schiller:

“Naive” and “sentimental”: I use these two terms knowing they may at first be misunderstood. I mean them not as we commonly interpret them but rather in the sense that Schiller used them in his essay “Über Naive und Sentimentalische Dichtung”... Schiller saw essentially two types of creative personalities: “those who are not conscious of any rift between themselves and their milieu, or within themselves; and those who are so conscious.” (I [that is, Adams] quote from Isaiah Berlin, who so succinctly summarizes Schiller’s point of view.) The “unconscious” artists are the naive ones. For them art is a natural form of expression, uncompromised by self-analysis or worry over its place in the historical continuum. “They see what they see directly, and seek to articulate it for its own sake, not for any ulterior purpose, however sublime.” Schiller cites Homer, Shakespeare, Cervantes and his own contemporary, Goethe, as examples of the naive. Opposed to this is the sentimental poet whose art “comes about when man enters the stage of culture where the primordial, sensuous unity is gone…The harmony between sense and thinking, which in the earlier (naive) state was real, now exists only as an ideal. It is not in a man, as a fact of life, but outside him, as an ideal to be realized.” The sentimental voice arises when the unity has been broken, and the poet (or composer or painter, etc.) seeks to restore it or, going to the opposite extreme, parodies or satirizes it. In Isaiah Berlin’s words, the sentimental artist “looks for the vanished, harmonious world which some call nature, and builds it from his imagination, and his poetry is his attempt to return to it, to an imagined childhood, and he conveys his sense of the chasm which divides the day-to-day world which is no longer his home from the lost paradise which is conceived only ideally, only in reflection.” For Schiller the poet “is either himself nature (and thereby naïve), or else he seeks nature (and is thereby sentimental).” (from http://www.earbox.com/sub-html/comp-details/nsm-de.html)

Okay, that’s not so bad, really -- in fact, it is quite good. But what it leaves out is Schiller’s observation about the different relation of the self to the poem for the two different types of poet. The naive poet, feeling no alienation of self and world, presents the world without ever presenting the self. Think of Homer’s poems -- you never get any editorializing, or any sense of the man Homer, if in fact there ever was such a man, as I understand is questionable. Or think of Shakespeare -- much has been made of his aloofness from his own work (personally, I don’t see how Goethe fits the paradigm, but I’ll bow to Schiller’s superior Goethe chops any day). The sentimental poet, though, can’t help but make the self, the individual sentiment or sensibility, the core of the poem. I mean, think about Wordsworth’s “Tintern Abbey,” where the ratio of Abbey-to-Wordsworth is something like 1:20. When Wordsworth writes, in the “Preface to Lyrical Ballads,” of “feeling giving importance to action” rather than action to feeling, he’s tipping his hand as a sentimentalist. His poems will be about his yearning self, rather than about the world in its fullness -- which is the naive poet’s selfless gesture.

So Whitman's gesture of representing first the retinal impression, and then the impression mediated by the self, is neither the barbarity seen by Thoreau and Santayana, nor the intellectualizing seen by Vendler. It is a sentimentalizing, an insertion of the individual sensibility into a world first perceived as innocent or naive. This should come as no surprise --the a Whitmanic "Song of Myself" is every bit as much a matter of Romantic self-centered sentiment as "The Prelude, or, the Growth of the Poet's Mind." You just know, too, that this sentimentalizing is somehow connected to Whitman's particular eros. He's such a perv, God bless him. A voyeur for sure (remember the "twenty-eight bathers" section of "Song of Myself"?). And a leading literary auto-eroticist of the nineteenth century (Benfey remarks on this, in a slightly creepy reading of "Sparkels from the Wheel"). His isn't the naive erotic gaze, simply taking in the other. His is an eros that requires the notion of himself as intruder or observer or creeping lingerer. I'm sure Allen Ginsberg really did find him in that supermarket in California, lurking and leering and "eyeing the grocery boys." It wouldn't just be the thought of the boys that got Whitman going. It would be the thought of himself watching the boys. Sentimental eros, not naive.

Interestingly, we still seem to be in a sentimental age for poetry, despite various alternatives (objectivism's new version of Schiller's naivete, say, or langpo's play at eliminating the self through other means). I mean, what is Jorie Graham if not a poet who spreads the sheen of a somewhat precious sensibility over the Big Ideas she likes to reference?