Simone Muench in the Gray Ganges 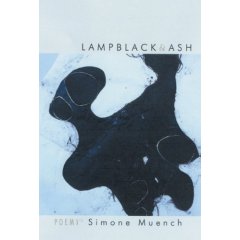 When I shuffle down my driveway Sunday mornings to pick up the newspaper Tony Soprano style (tee shirt, boxers, bathrobe, morning stubble and rope-soled canvas shoes), I generally know what to expect: the great gray Ganges that is the New York Times reliably delivers an editorial I'll like (generally by Frank Rich), and editorial I'll hate but that is just intelligent enough to compel me to read through to the end (generally by David Brooks), a magazine I'll be unable to pry loose from the hands of the lovely and talented Valerie, and a book review section more interesting for its treatment of historical nonfiction (lives of rich dead white guys, mostly) than for its choice of literature. But lately some more interesting things have been surfacing there, and the once-moribund poetry reviews have been spiced up with the occasional comment on a book of poems I actually want to read. Today a new high-water mark was reached, I think, as the oyster-gray waters lapped up on me bearing a review of Simone Muench's latest, Lampblack and Ash.

who wrote the short review, seems to know what he's reading. "Many poets have developed crushes on the French surrealist Robert Desnos," 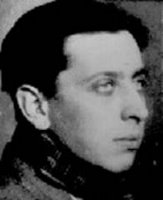 Joel writes, "his reputation as the dreamiest of the dreamers in Andre Breton's circle ... make[s] him a fascinating figure." Joel sees his influence in Lampblack and Ash (he's right, I think), but he does better than that: he provides a brief and quite precise description of Simone's method in the book: "Muench tends to begin a poem with a vague suggestion of setting or theme, and then piles on gorgeous phrases." This is exactly right, and very much in the French tradition. Desnos may be an immediate influence, but behind him you've got to see the whole Symboliste groove, the shaping of suggestive and connotative fields without a great deal of literal context. This is, I suppose, part of the whole movement toward indeterminacy that's been going on in American poetry for a generation or more, and the presence of a review dealing with these issues in the New York Times can only confirm the thesis that this sort of writing has gone mainstream. I know I spend a fair bit of blog-time grumbling about lousy examples of this sort of writing, but the poems in Lampblack and Ash are always interesting and generally successful poems in an idiom that lends itself to going badly wrong in less skillful hands.

There's an interesting essay to write, someday, about the development of Simone's writing. I was surprised when, a while back, she gave me some poems for Samizdat in her current style, since her first book, The Air Lost in Breathing,

was much more literal, solid, and down-to-earth in its anecdotal style. Still, I should have seen the seeds of her new developments in those poems that would take a surreal turn, or break into odd images. (I can't quote from it just now, since some students I sent to do an interview with Simone borrowed my copy). In a way, Simone's development can be seen as typical for our times: from a family-confessional mode toward a kind of symbolist-surrealist influenced poetry of acontextual images. What's anything but typical in her work is the degree of skill with which she's worked in both idioms.

I remember a capacity crowd of students in Lake Forest's Meyer Auditorium eating up the poems from The Air Lost in Breathing a couple of years ago. It was no surprise: Simone said it had been important to her when writing the book that the poems work well for a reader like her sister -- a sort of common reader of the kind described by Virginia Woolf, not a habitué of the poetry demimonde. I remember, too, a reading a few months later, at the much-missed Gallery 312 in Chicago. Simone and I were both on the bill for a crowd that consisted of poets, publishers and others in town for the AWP conference. Simone read from poems that were to become part of Lampblack and Ash, and the demimondain crowd loved it. I wonder, though, how things would have gone had the audiences been reversed. I imagine that the two books appeal, for the most part, to two different audiences, neither of which would allow themselves the pleasures offered by the other book. But I hope I'm wrong.

Sadly, the brief format the Times has turned to for its poetry-roundups (usually 8 books or so in two pages) doesn't allow for a whole lot of analysis, let alone a kind of retrospective look at a poet's work. Still: when the paper of record starts writing about Simone Muench, something's right in the world. I remember why I come to the great gray Ganges in the first place.