My Race Sees Me: On African-American Poetry 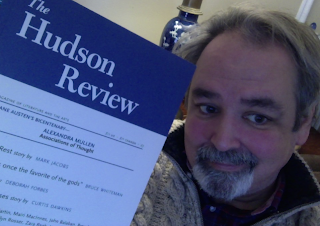 The latest Hudson Review has dropped into my mailbox, and along with writing by William H. Pritchard, Zara Raab, David Mason, and others, there's an essay called "My Race Sees Me," in which I talk about three African-American poets: Marcus Wicker, Cameron Barnett, and Evie Shockley.  It begins like this:


I once attended a debate between two distinguished poets, both women, who were to dispute whether one wrote as a woman poet, or as a poet who happened to be a woman.  I don’t recall who won, but perhaps that’s less important than the fact of the debate itself: it indicates how, if one is not from a dominant group, the question of identity can’t be taken for granted: even if one wants to shunt it aside and write of other things, one often feels compelled to make a case for doing so.  If that can be true of women, even several generations into feminism’s transformation of the world, it is even truer for African-American writers—especially in a time when police violence against black people in America has become more visible than ever.  2017 may have been an especially difficult year for people of color in America, but, as recent books by Evie Shockley, Marcus Wicker, and Cameron Barnett make plain, it has also been an outstanding year for African-American poetry.
Evie Shockley’s third book of poetry, semiautomatic, certainly addresses issues of African-American identity and the racially charged political urgencies of our time, even as the poems refuse to be limited to such issues.  The book is notable not only for the way it navigates questions of identity and politics, but for the variety and virtuosity of its use of form.  Form, for Shockley, begins with music.  How couldn’t it? The daughter of a jazz musician, she grew up in Nashville, in a part of town where, she says, there were “churches on two out of every four corners” and where one could come to believe that “any six or seven people with vocal chords could produce four-part harmony at the drop of a dime.” “My relation to poetry was shaped,” she says, “by the jump-rope and hand-game songs the girls in my neighborhood sang.”  These sounds, along with Mother Goose and Ogden Nash, worked their way into the deep recesses of her mind, and find their way into her poetry, even as she explores a wide range of formal possibilities.  In semiautomatic we find poems that show considerable agility with traditional forms like the Spenserian stanza, as well as innovations with rhymes and refrains, such as “a-lyrical ballad (or, how America reminds us of the value of family),” which tells the story of race-based murder in America from the days of midcentury lynchings through the deaths of Sandra Bland, Trayvon Martin, and various victims of contemporary police violence.  It opens with three stanzas on Emmett Till, the form of which (rhymes of xAA//xx//BB) repeats throughout the poem, along with the insistent refrain italicized refrain that ends each section:

he was a boy from chicago, in mississippi heat,
being as bad as a good boy could be,
whistling his eyeful of an off-limits she,

and her menfolk dragged him out of bed, beat him to death, tied
a cotton gin to his body, and sank him in the tallahatchie river.

Such grieving, Shockley implies, is the harsh and lamentable method by which our country has taught, and continues to teach African-Americans the value of family.


The full text is available here.
Posted by Archambeau at 12:14 PM No comments: