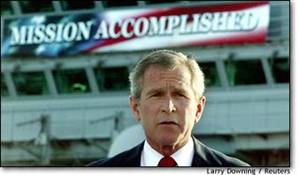 Okay, I know that the most offensive thing in the following passage from the new White House plan for victory in the midterm elections (uh, I mean in Iraq) is the overt lie (that the war in Iraq is part of the war on terrorism, not a distraction from it that makes us less safe). But let's stick to matters of style:

As the central front in the global war on terror, success in Iraq is an essential element in the long war against the ideology that breeds international terrorism. Unlike past wars, however, victory in Iraq will not come in the form of an enemy’s surrender, or be signaled by a single particular event – there will be no Battleship Missouri, no Appomattox.

Right. It is well known that George W. Bush has issues with language, but you'd think the White House would be competent to hire some good writers, capable of lying to us in a grammatically correct manner. But no! While the writers mean to say that Iraq is the "central front in the global war on terror," they actually say that success in Iraq is the central front. Success isn't a place! No! Who are these writers? Power-point monkeys of some kind? The English professor pulleth out his hair in frustration.

One also has to wonder about the writers including a reference to the Japanese surrender aboard the battleship Missouri. Didn't Bush already tell us something about victory from the decks of a warship? Sigh. Grumble.


ADDENDUM: For a good example of the way ideology and political crisis can distort language, see this article on how Donald Rumsfeld doesn't want us to use the word "insurgency" anymore. No indeed. He wants us to call the Iraqi insurgents (noun, "people who revolt against civil authority") "the terrorists." I suppose the idea is to re-enforce the Big Lie at the start of Bush's new plan: that Al-Queda and the Iraqi insurgency are, somehow, one and the same. Interestingly, as the story reveals, his own generals have refused to toe this line. 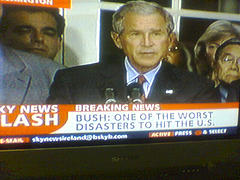 Posted by Archambeau at 7:03 AM