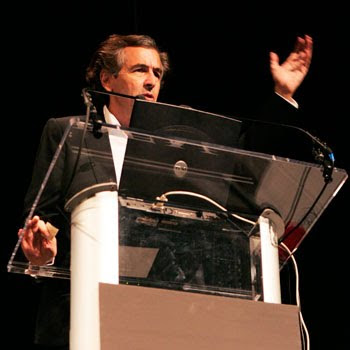 A few years ago I found myself running late for dinner with my wife, parents, and friends in Paris. As I came careening gracelessly around a corner of the Place du Panthéon, I came damn close to knocking over a glamorous looking guy who was being interviewed by a small television crew. I muttered my "Je regrette" and "désolé," and then it struck me: the man was none other than Bernard-Henri Lévy, France's best-known philosopher. I gawked a bit, irking the television crew even more than I'd already done, before pulling myself together and huffing and puffing along on my way to the (now vanished) Table D'Aude, home of the finest cassoulet ever to clog Parisian arteries.

The scene I'd interrupted — an animated philosopher discoursing about pubic policy for a t.v. camera, against the background of the dome of the Panthéon — couldn't have been more French if it were carrying a baguette, smoking a Gauloise, and carrying pornography home in the basket of a scooter. I mean, one can hardly imagine an American equivalent, a scene in which NBC asked, say, T. M. Scanlon for a few casual comments on the events of the day. Philosophy simply has a bigger public presence in France than it has in the United States: philosophy is taught in French schools, French philosophers write regularly for the popular press, and guys like Bernard-Henri Lévy are recognizable media presences (everyone knows what the initials BHL stand for, and everyone knows the man by his trademark open-collar white shirts. No one in America knows or cares what T.M. Scanlon wears, and if asked what TMS stood for, most people would assume it's a new cable channel).

I stumbled into an answer of sorts the other day when, unable to spend another minute reading galley proofs for a piece I'd written about recent scholarship in Irish poetry, I staggered out of my office and down the hall to see Dave Park, a colleague from Lake Forest's Communications Department. Parksie set aside his pile of end-of-semester grading, blinked wearily as I heaved myself down on his office couch, and asked me what I'd been working on. Always ready to inflict my obsessions on anyone who gives me an opening, I pulled the proofs for my article out of my bag and asked him what he thought of a paragraph where I discussed the critic Elmer Kennedy-Andews' treatment of the Irish poet John Montague. Montague was a somewhat lonely apostle of modernism in Irish poetry, and Kennedy-Andrews, I'd written, had done a good job of made a point of

tracing the influence of American poets like Hart Crane, Charles Olson, and Robert Duncan on Montague’s poetry, and he does well to draw attention to Montague’s 1974 essay “In the Irish Grain,” which he sees as a call for a more expansive, experimental poetry than was offered by British models at the time. Likewise, Kennedy-Andrews writes insightfully about Montague’s attitude to place and nation, calling him a “global regionalist"—that is, a figure concerned with the intersections of local life and the kind of international culture and history that so fascinated poets like Pound and Eliot. It’s unfortunate, though, that Kennedy-Andrews didn’t go further in exploring the connections between Montague’s interest in American experimental poetics and his aversion to the role traditionally offered to the Irish poet as the voice of the nation. After all, the American tradition that interested Montague developed in a country that offered poetry very little by way of a public role, and that therefore placed a low premium on the ability of the poet to communicate to the common reader. In choosing a formally experimental tradition, Montague was implicitly rejecting the idea of the poet as someone who spoke to a broad national audience. All the elements for an argument along this line exist in Writing Home, but the argument itself never quite emerges.

[This is from a piece called "Postnational Ireland," which will be coming out soon in Contemporary Literature]

Irish poets, I explained to the indulgent Park, enjoyed a wide national audience and a high status unknown to their American peers, but this came with a price. To retain this status, they had to conform to a certain kind of reader-friendly discourse and, more importantly, they had to write as Irish poets — that is, as representatives of national identity. Since Irish decolonization in the late nineteenth century found cultural expression (especially literary expression) before it could find meaningful political expression, there was a tradition of seeing the poet as connected to national identity. If you wrote as a nationalist, you'd have an audience and status — but the essential part of the nationalist poet, as far as the audience was concerned, was nationalism, not poetry. When Montague went in other directions, he soon found that the people weren't really all that interested in poetry per se, and wrote his way into a kind of obscurity. Not that that's bad. I mean, obscurity (in terms of visibility, and sometimes in terms of lucidity) is the place where almost all American poetry lives.

When I'd finished, Park gave me another blink, then said "Oh. Like in France." Seeing that I was slow on the uptake, he explained. Apparently, it's like this: France has made a public place for philosophy for reasons similar to those the Irish used in making a public place for poetry. That is, it became connected to national identity. It's not that philosophy was important in itself, it's that it became an expression of what it meant to be French.

One way to date the origins for this is to look at French television in the 1950s. The French were deep into a crisis of national identity, confronting their eclipse as a world power, feeling with trepidation their weakening grip on their colonies, recovering from the humiliation of the occupation and the shame of the Vichy regime, all in the shadow of a growing Anglo-American cultural hegemony. What to put on television? How to reassure themselves of the greatness of their national tradition? How to distinguish themselves from the relentlessly anti-intellectual onslaught of American pop culture? What to turn to in answer to the question "what makes us French, anyway?" Ah! Philosophy! Philosophy makes us French! We have that. We have Sartre, we have Camus, we have Voltaire and Diderot and all the rest! And so a place was made in French media culture for the public intellectual, especially the philosopher.

Of course there had to be some existing tradition that identified philosophy with Frenchness, otherwise the gesture would have been hollow and as doomed to failure as Florida Atlantic University's embarrassingly ill-conceived program for the creation of public intellectuals. The French Revolution, though, had created a strong bond between the idea of Frenchness and the idea of philosophy. There have, after all, been few moments when philosophical thinkers took such a prominent role in the creation of a new vision of a nation-state. So there was a useable past available: the French had long identified philosophy with the nation, and now it could be made into part of an ongoing media spectacle that would assure the French public that they were special, had a great tradition, and weren't just a province of the emerging postwar American hegemony.

My favorite moment in this story actually involves the rejection of a French philosopher by a French nationalist. Charles DeGaulle is reported to have said of Sartre "he is not French." I suppose this was a right-wing politician's attempt to discredit a left-wing philosopher, a gesture sort of akin to the McCarthy-era charge that political lefties were somehow un-American. But what this really shows us is just how important philosophers had become as national figures in France. I mean, George W. Bush never even had to acknowledge the existence of Richard Rorty, much less try to discredit him as a figure of national identity.

So it's not that the Irish love poetry more than we do, or that the French love philosophy more than we do. Or at any rate it's not as simple as that. I suppose the best analogy to what happened in France and Ireland would be something like sexual fetishism. I mean, nation-states need to cultivate the idea of nationalism, and the public in a nation state wants assurance of its national identity. In France, this became associated with philosophy, and in Ireland, with poetry — much as sexual attraction can become associated with something other than the body. The movement of attraction from, say, the body of a woman to something associated with that body (high-heeled boots, to use a common enough example) is much like the movement from nationalism to philosophy or poetry we see in France and Ireland. Of course, once the association comes into being, it'll become the primary thing for some people — so just as there are high-heeled boot fetishists in greater numbers in cultures where people wear such boots than in those where they don't, there are going to be more philosophy-geeks and poetry-nerds in France and Ireland, respectively, than there are in most countries. But in both cases nationalism was the primary force, and philosophy and poetry came to prominence by (often subtle) association with the idea of national identity.

It's all started to change in Ireland, though. There are still poets, often excellent poets, peddling Irish identity — one thinks of Heaney, Boland, or Paul Muldoon in his way. But I think it's important that these are ex-patriot poets, and not young. The younger poets in Ireland don't seem that animated by the nationalist tradition any more, a sign that the old association of nationalism and poetry is coming to an end. The Irish poet Vona Groarke gets at all this when asked by an interviewer about what makes for an Irish poem:

It's easy to say what has been an Irish poem, but now that glass has been shattered, and there are so many parts of it. It used to be a rural poem, but it's not anymore. Now it's equally likely to be urban as it is to be rural... I find it quite difficult to define what an Irish poem is now, and I think that's a healthy.

I imagine it is healthy for what we might call the biodiversity of poetry in Ireland. There will be less pressure to write in a particular way. Then again, I expect we'll hear, a generation hence, a fair bit of bitching and moaning from Irish poets about their lack of a place in the public eye. It will sound, one imagines, a lot like what one hears from American poets and intellectuals now.

In other news, my next book will be out soon. It's called Laureates and Heretics: Six Careers in American Poetry. You can read about it at the publisher's site or pre-order it on Amazon.com. 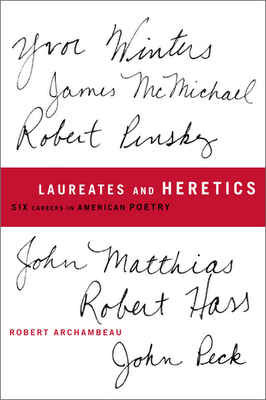 In still other news, Louis Armand's out-of-print Avant-Post: The Avant-Garde Under Post- Conditions is now archived online. You can read the entire book, including my contribution, "The Death of the Critic: The Critic-Pasticheur as Postmodern Avant-Gardist" at the archive site. 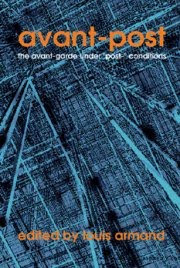