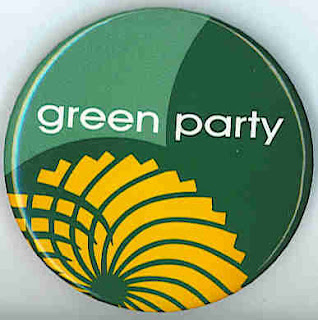 So here's a press release from the Illinois Green Party, which won 10.4% of the vote in the 2006 gubernatorial election, and the right to be treated on par with the Republican and Democratic Parties. Sadly, this right has been denied, as I found out today at my polling place, where I was told on multiple occasions by multiple officials that there were no Green ballots on offer (that's precinct 218, Moraine Township, the Edgewater School polling place). When I insisted, and told them they were in violation of the law, they finally found one for me, but they hadn't offered them to anyone all day. Oy.

Voters who hoped to participate in the Illinois' first ever statewide Green Party primary are receiving a very rude reception at many polling places, especially in Chicago.

In the early hours of voting, Green Party officials began receiving reports from frustrated voters across the state who, in many cases, had been told by pollworkers that there are no Green Party ballots available at their polling places, or that they had to vote on suspect electronic voting machines, even while other parties use paper ballots.

Some of the most outrageous incidents, however, occurred across the wards of Chicago, where Green Party ballots have been apparently tampered with so they can't be read and accepted by voting machines, voters are given Democratic ballots despite requesting Green ballots.

Check ilgp.org for more reports as they are received. More information will also be available at the Green Party gathering tonight at Decima Musa Restaurant, 1901 S. Loomis, Chicago (in Pilsen).

If you're in Illinois and weren't offered a Green ballot along with the Republican and Democratic ballots, shoot a note off to election-problems@ilgp.org — even if you hadn't planned to vote for the Greens, the officials were required to offer the ballot, and in bringing violations to public attention you'll be helping everyone who thinks the two-party system has failed us.

Okay. Enough with the Righteous Indignation (for now). I think I need a scotch.

Posted by Archambeau at 6:23 PM No comments: