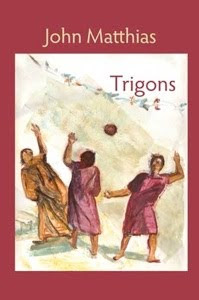 I've been holding off blogging about Trigons, John Matthias' latest book, since I want to review it properly (if I ever dig myself out from beneath the papers and poems of the late great Göran Printz-Påhlson, which I've been editing for months). Those of you to the east of the Atlantic have a chance to get a taste of what Matthias' new work is like, though, at a reading sponsored by Shearsman Press later this month. Here's the official propaganda:

We published John Matthias’ new collection Trigons a short while ago.

John is visiting the UK shortly and will give a reading at the University of Notre Dame’s London facility. Below is the official invitation to the event; if anyone wants to attend, please follow the instructions at the boom of the page.

You are cordially invited to a poetry reading, book launch and signing by Professor John Matthias, editor of Notre Dame Review and author or twelve volumes of poetry, along with many translations, critical essays, and scholarly books. This reading is Matthias’s first in London for many years. His earliest British publications date from the early 1970s when he lived in Suffolk, Cambridge, and Little Shelford. He has been Visiting Fellow in poetry at Clare Hall, Cambridge, and is currently a Life Member. His recent books of poetry have been published exclusively by British publishers, Salt Publishing in Cambridge and Shearsman Books in Exeter. Carcanet Press has also just released an anthology, Five American Poets, including Matthias’s work alongside that of the four other poets of his immediate generation who attended Stanford University in the 1960s, Robert Hass, James McMichael, John Peck, and Robert Pinsky. A critical volume on these five poets written by Matthias’s former student Robert Archambeau, Laureates and Heretics: Five Careers in American Poetry, will also be available at the reading along with the Carcanet anthology and these books by Matthias:

and especially the book just published that is to be celebrated at the reading and launch:

Trigons derives its title from an obscure Roman ball game mentioned by Petronius in Satyricon. The word also has meanings in the fields of music, astrology, gemology, architecture, poetics, and comic book illustration, all relevant to this book that is sub-titled “Seven Poems in Two Sets and a Coda.” Trigons shares something of the same spirit as Matthias’s two most extravagantly inventive experimental sequences, Automystifstical Plaice and Pages. The following are representative comments about Matthias’s work as a poet: “Robert Duncan: “Matthias is a Goliard…one of those wandering souls out of a Dark Age in our own time”; Guy Davenport: “One of the best poets in the USA”; Robert Hass: “A powerful historical and geographical imagination”; Stand magazine: “A splendidly wrought mosaic of western culture and history shot through with personal inquiry and discovery”; Parnassus: “One ‘Briggflatts’ after another”; Times Literary Supplement: “Bursting with masterful intelligence”.

If you plan to attend this event, please notify the Notre Dame London Program Office by email or phone. london@nd.edu; tel: 020-7484-7811.