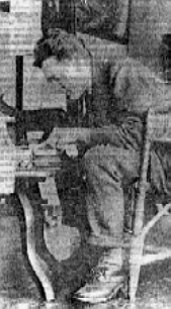 Mark Scroggins makes some interesting contributions/corrections/refinements to the ongoing discussion of war poetry prompted by Kevin Prufer's "Army Tales." Firstly, he points out that the tomb of the unknown soldier works through synechdoche not metonymy (right! And in the most literal way possible!). Secondly, he draws an interesting distinction between what Prufer's up to and what David Jones was doing in In Parentheses:

First of all, I don’t particularly read what’s going on in David Jones’s In Parenthesis – the superposition of previous wars over the Great War – so much to be a matter of the contemporary soldier’s “anonymity” ... as simply a matter of precisely superposition. That is, the Anglo-Welsh Great War soldier does not lose his contemporary identity when he recognizes that he’s standing in the same shoes as one of King Harry’s invaders of France, but rather finds his contemporary situation enriched (a dreadful word, given the horrors described in the poem, but I can’t come up with a better at the moment) and deepened.... [I]t’s a matter of “getting at the shared life beyond the individual life,” but I don’t think it necessarily involves the loss of individual identity, as in the anonymity imposed by the state apparatuses of Jarrell and Auden.

This makes sense to me. I was trying to get at the sense, shared in Prufer and Jones, of the identity of all soldiers, or at any rate of their shared participation in a larger identity. This seems to me to be one of the great tropes of war poetry — you even see it, in a way, in Wilfred Owen's "Anthem for Doomed Youth," where the "anthem" is not for any national group, but for the soldiers of all sides, in their sharing of an identity stronger than any mere national identity. But there is a real distinction, as Mark points out, between shared identity via anonymity and shared identity via a felt participation in the lives of those who have preceded you (and, for Jones, geography counts: the shared identity is largely for those who have preceded you in this place).

I suppose the use of anonymity does connect, for Prufer, with the humanistic critique of bureaucratic life, putting him in the Auden-Jarrell camp. For Jones, though, the key is Christianity, with a big dose of Poundian modernism, rather than an anti-bureaucratic humanism, so he'll approach the work from a different angle. In Jones' work, the identity of self and other doesn't come from an erasing of individuality by the state. Rather, that self/other identity can exist even while individuality is retained. I suppose what we're dealing with in Jones, then, is a kind of aesthetics of mystery (you know, like the trinity), in the theological sense of that word.

Posted by Archambeau at 8:26 AM