Is There a There There? The Idea of Chicago Poetry 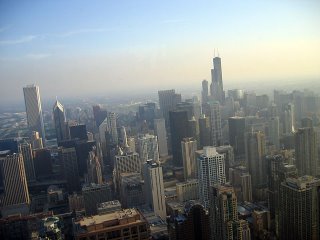 So I'm back from Iceland, which I'm defining as "the country with the landscape that tries too hard" — as you drive around the countryside, you can almost here it calling out to you, saying "glaciers! glaciers here! get your glaciers! What? Not into glaciers? Not a problem. How about a geyser? Would a geyser be something you'd be interested in? No? How about if I throw in a waterfall? Make that two waterfalls! And a gorge! With steam coming out of it! And a lava field! How about some hot springs? Could I interest you in some hot springs, with maybe a bubbling mud field thrown in for free, eh? Eh?" Extrordinary, really.

Anyway. In a couple of hours I'm going to be giving a paper at the Midwest Modern Language Association, which is being held here in Chicago this year. I'm on a panel on Chicago poetry, run by the redoubtable Bill Allegrezza, and here's my paper in its current, slightly rough-around-the-edges state (I haven't proofed it, because I thought I'd only be delivering it out loud, but when someone suggested I throw it onto the blog, I couldn't think of any reason not to, so here it is, replete with whatever stylistic errors remain). It's called "Is There a There There? The Idea of Chicago Poetry." Some of you may recognize a few of the quotations from Paul Hoover, and a stray comment or two, from other posts on this blog. Auto-plagiarism is okay on the internet though, right?

A shout-out goes to Michael Anania for talking through some of this with me from Austin, and another shout-out to Dave Park for listening to me run all this by him while he was trying to eat a Monte Christo sandwhich.

It was 1937 when Gertrude Stein, ensconced in Paris, said of her native Oakland that “there is no there there.” It was her way of justifying a move from the provinces to the glittering literary metropolis. Since Chicago is paradoxically both province and metropolis, with all the anxieties and complexes appertaining thereunto, I suppose the question “is there a there there?” is pertinent to our city as a center of literary — and, more particularly, of poetic — production. Certainly there are poets in Chicago, of both innovative and conservative stripes, and there have been for generations. But is there something we could call Chicago poetry, and is it in some way innovative? Is there, poetically speaking, a there here?

The answer seems to be yes, according to the city’s poetic movers and shakers. But the yes is a very strange one, for this reason: at almost any point in Chicago’s literary history, you can find someone claiming that there was no distinctive, innovative Chicago poetic scene until that very moment. I exaggerate, of course, but you get the general point: over and over again, for just shy of a century we find people willing to say that the natives were without any authentic poetic culture until a great pioneer came along and made the heroic effort to civilize the wilderness.

What I’d like to do today is to root around a little in the documents of our city’s poetic history, with an eye to the way certain myths of origin crop up again and again. I’d like to focus on three in particular, which I’m calling the myth of the aboriginal as missionary; the myth of benevolent eclecticism; and the myth of a poetic freedom that resides in having nothing to lose. By myth here I don’t necessarily mean “falsehood” — although you have to be more postmodern than I am to believe that all of these origin stories (in which the tabula rasa of Chicago suddenly becomes a city with a distinct poetic life) can be true. I suppose I mean “myth” in something like an archetypal sense, as a story that different generations seem to come to again and again, consciously or (more likely) unconsciously imitating their predecessors.

Posted by Archambeau at 8:36 AM No comments: