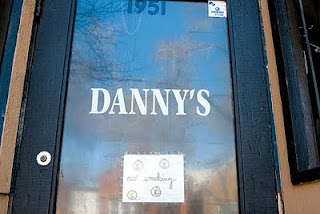 Robert Archambeau: I was all set to blog about Nicanor Parra and Roberto Bolaño, but talked my ideas out late last night after too much coffee at my favorite breakfast-for-dinner joint. Signs now point to no bloggery today: consider yourselves spared, people of earth!

That, people of earth, was my Facebook update this morning, but it seems I'm not much of a prophet: I'm blogging after all. Not about Parra and Bolaño, though: rather, I'm posting a Facebook exchange I had with Seth Abramson shortly after posting my update about the two Latin American poets and the late-night breakfast. Strangely enough, given my recent talking-out-live those comments that might have gone into a blog post, the exchange with Seth was about the relative importance of live and virtual discussions of poetry.

As I was scrolling around on Facebook, I ran across this, a provocative update of Seth's, apparently intended as a response to the developments in Chicago-area poetry that Kent Johnson, the present humble blogger, and others had been blogging about, as well as to Steve Burt's Chicago-heavy roster of "New Thing" poets. Those of you who don't waste hours in online social networking might be surprised by Seth's use of the third-person to describe himself. Rest assured he's not emulating Caesar's Gallic Wars: Facebook's format sort of encourages you to write this way:

Seth Abramson: thinks one can't apply pre-internet school-creation models to the Internet Age. Proximity is no longer a prerequisite for an aesthetic school. There is no New Thing or New Chicago School. Poets are inspiring each other from great distances, and to think it requires sharing a bar with someone to be like-minded/mutually-inspired is to take a literal view of how art moves that hasn't been relevant since 1980.

Seth, a veteran of many internet conversations, followed this up almost immediately with the following comment, designed to prevent people from jumpily assuming he was out to attack anyone's poetry:

Seth Abramson This is not to, in any way, denigrate the poets now being associated with those schools, who are (many of them) extraordinarily talented. Their work simply cannot be aligned, however, merely on the basis of either Flood Editions (The New Thing) or Danny's (NCS), etcetera. The world's a lot bigger than that now. Bigger than Chicago. Bigger than a single excellent independent publisher. We need to think about schools in new ways, and not listen to those who would have us trying to re-create cultural artifacts from the 50s and 60s.

Ah! I thought. This is interesting! And it's made all the more interesting in that it's a comment being made at exactly the same point in time that a bunch of Chicago's poetry people have gathered at the Hyde Park Art Center for a day-long conference on the poetry of our fair city (a conference I'd have been part of if I hadn't dinged up my leg in a cycling accident that still has me stuck with limited mobility for several more weeks).

The question of the relation of virtual networking and actual face-to-face contact became more vexed when I received, via Facebook, a Blackberry-sent note from Larry Sawyer, saying he was down at the conference. I messaged back, asking him to tell Ray Bianchi and Bill Allegrezza that I wished I could have been there. I was sure there were interesting conversations taking place down at the Art Center (and due to take place at Jimmy's Woodlawn Tap or some nearby taco dive later) of which I simply wouldn't be a part. At the same time, I was privy to Seth's online comments, and semi-involved in the Hyde Park event via Larry's trusty Blackberry and the good graces of Facebook. Which kind of proximity, real or virtual, mattered most? I typed out a reply to Seth:

Robert Archambeau: I agree that proximity is less important than ever, but I don't think it's completely over with yet. Let's call it residual and declining rather than obsolete. Like CDs.

The other big factor that remains, even in the internet age, is the whole old-school tie thing: networks of people who went to grad school together seem to be pretty important. The campus could be the new unit of literary history for a while.

Things got a little muddled after that, as Seth and I cross-posted (not that live encounters lack such confusion: had Seth and I met live, in, say, that favorite hang of Chicago poets, Danny's Tavern, we probably would have had to repeat ourselves over the din of the assembled literati, hipsters, and assorted bar barnacles):

Seth Abramson: Robert, I'm glad you mentioned this--I was about to add a comment about Kent Johnson's reference to Iowa. It's odd to think I would be more influenced by (say) Iowa classmates I never, in many instances, workshopped with or socialized with than--great example--Ron Silliman, whose work I first discovered through his blog. I am, without a doubt, an Iowa poet more influenced (now) by Silliman than any student I studied with at Iowa. MFA programs don't really traffic in influence in that way; my classmates all had their own visions. And Peter Gizzi affected me the most of any professor I had--and he teaches at UMass.

Seth Abramson: To add to my above comment, Robert: I mean to say that what happens between MFA students happens primarily, I think, post-graduation, not on campus. Those networks b/t peers who also become lifelong friends and cooperative readers. Brown--not Iowa--is actually the very best example of this.

Robert Archambeau: What I mean is this: people are likely to be in contact with the poets they met in grad school, likely to bear some relation to their prof's work (even if it is rejection), likely to stay in some kind of touch, likely to publish one another over the years, etc.

I take your point about you and Silliman. But I also think that even now, our face-to-face contacts still exert some influence. I think about the people I knew at Notre Dame, who almost all think of John Matthias as a hugely important poet. Very few people who went elsewhere seem to feel that way. And this is true even in a time when physical proximity is in decline.

Robert Archambeau: Looks like we cross-posted, Seth, and are more or less in agreement about all this.

Seth Abramson: I do agree--we must "meet" those who will influence us. Many of those "meetings" take place online or via books we read (i.e., often it is a unilateral "meeting" whose other half may never know it's even occurred). MFA programs allow some of these meetings to happen, even if the actual influence will exert itself over many off-campus years of contact through phone, e-mail, blog, or book publications. Kent's essay about the New Chicago School was so literal about "place" that he required all members of a school to be within not just driving distance of one another, but reasonable driving distance. Does this mean Peter Gizzi (Brown) is no longer influenced by Lisa Jarnot (Brown), because they both went there but then moved off to their own lives and pursuits (while remaining friends)?

When I left for more coffee, the conversation was still going on, with contributions from Angela Genusa, David Groff, and others. I'm hoping to check in on it later: I'm as interesting in hearing what went on there as I am in finding out what happened in Hyde Park. For now, at least, both kinds of conversations matter.

In other news, Johannes Goransson makes some important points about "Double Gesture," an essay I wrote for Boston Review about Lars Gustafsson and Frederik Nyberg, Swedish poets of different generations.

Also, Henry Gould continues his meditation on manifestos, which began as a letter about an essay I wrote for Poetry about the future of manifestoes.