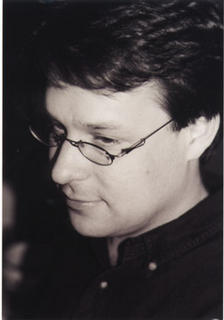 Fallen from a Chariot, Kevin Prufer's new book, is one of those collections of poems that is written as a book: the four parts hold together. The first section is all elegy for a woman who died in a car wreck, and the section serves as a kind of overture, giving us most of the images that will recur throughout the collection: falling gods, death, birds, a crashed car. I imagine the car wreck to have been something real in Prufer's experience, in part because the elegaic note rings very true, and in part because Prufer has looked at cars as emblems of mortality before (as in his earlier poem "Death Comes in the Form of a Pontiac Trans Am"). Subsequent sections pick up the theme of death as a fall, but take it elsewhere (notably to ancient Rome in the second). He embroiders more and more symbols into the fabric of the book as he goes along: doomed airplanes, a ship reminiscent of The Titanic, poisonings, fallen empires, more birds, more fallen gods, more wrecked cars.

The point of comparison for me is Eavan Boland. Like Boland (especially in her collection In a Time of Violence), Prufer writes a poetry that works best by accumulation: themes and images recur, and they take on more significance as the variations pile up. Prufer used to write a fairly formal line sometimes, with a fairly strong sense of meter, but this book gives us a flatter, more prosaic line, also like much of Boland. There are two respects in which Prufer's got it all over Boland, though: incantation and interpretability. He's got more of the first and less of the second and good for him, I say.

We find his incantation here and there, where the language of elegaic longing becomes prayer-like, and this gives the lines an intensity and slight formality that raises them above the level of chopped-up prose. No one will ever say of him (as my students have repeatedly said of Boland) that reading the poet's essays and reading the poet's poems amounts to pretty much the same thing. This is nice, but less interesting than the matter of interpretability. Don't get me wrong, here: Prufer is no indeterminist, no post-avant or Jorie-Graham style spinner of faux-sophisticated fashionable nonsense verse. In fact, he writes in very clear sentences. But it is at the level of intersecting images that his book becomes something quite subtle. The variations on consistently repeated images make them quite nuanced and polyvalent, and hard to paraphrase. This is symbolism in the classic sense of the word, and it is wonderful to trace the patterns as they evolve though the book (which is, symbolically if not syntactically, a bit of a rhizome). Boland always seems to me to be very programmatic, to have decided where she wants to go and what she wants to mean, and in the end this is a limitation. Prufer seems more guided by a set of images the full import of which is not entirely disclosed, even to him. When I write a proper review of the book I may spend some time tracing them out, although my editor would have to be generous with space for me to do them justice (my copy of the book is pretty much scrawled over now, with notes and letter-codes for symbols).

The thing that interests me the most, though, is the way that Prufer decides to treat something quite immediate and intimate (elegy for someone he loved) through the long ago and far away. He loves to play with the idea of a past and a present that are oddly simultaneous, or with a large-scale historical moment that is somehow also something much more local. I'm saving all my best examples for the real review, but here's one I don't think I'll use there, because the two moments that seem simultaneous are more literally related than in the ones I most admire. Here, the death of the Emperor Augustus and the (much later) fall of the Roman Empire seem simultaneous (by the way: Prufer's lines are indented at places, but my html skills just aren't up to showing how, sorry):

The personification of the empire in immediate juxtaposition to the image of the dying Augustus gives us a sense of the empire and the man as somehow the same, or at least as oddly commingled. There's a lot of this sort of thing (a kind of verbal double-exposure) in the book, and it unites the historical (Rome's fall) with the personal (the death of a woman in a car wreck) and the mythological (the fall of a god to earth) as well as the natural (birds fallen from the sky, or swooping down to feed from the water) and the technological (airplanes and ships doomed to crash or sink). It is one way for a poet to get away from the cliches of the personal scenic mode, and to make something as old as an elegy new.

Now that I've lived with Fallen from a Chariot for a few days, though, I don't think it is really a book of contingent difficulties, of the sort of thing you have to look up. For one, the history it gives us is familiar, coming as it does from territory well explored in I, CLAVDIVS and on The History Channel. For another, there's very little sense of the alienness of the past. It exists, here, as a way of adding emotional heft (even sublimity, through scale of tragedy) to the present. The Romans don't seem that different from us — in fact, if that were Prufer's goal, he wouldn't have them walking around on the decks of cruise ships or playing cards. Prufer conflates past and present in order to better serve his descriptions of the present. There's nothing wrong with this, although my preference is for poems that give us the past in all its alienness, and, when they bring the present into the equation, do so by showing us how we are the guests of the past, interpolated into something that is in many ways remote and poorly understood, but that is nevertheless constitutive of who we are. (Geraldine Monk, Susan Howe, John Peck, Geoffrey Hill, Ammiel Alcalay, John Matthias, Peter Riley, Allen Fischer are the poets I think of when I think of this approach to the past). I've been trying to understand the nature of my preference for such an approach (what I'm calling Contingent Poetry), and my sense that it is somehow an important approach. I suppose it is because it doesn't just assert that "then is now is there is here," (which is Prufer's admirable task, and a great bursting of the narcissistic bubble of much contemporary poetry). It makes us see the alienness of our sources, and the alienness within ourselves, until they become familiar, and then we become what we already were, but with a new degree of consciousness.

Anyway — Prufer's book is moving as elegy and adventurous in its scope. He's prolific and not prone to repetition, so I'm looking forward to where he may take us next.