Art and Life from Aestheticism to Langpo 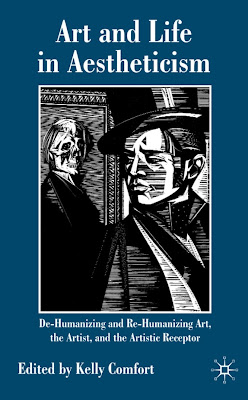 So check it out: Kelly Comfort, an amazing polymath who knows about Latin American modernism, Cuban writing, and German literature, has cooked up a collection of essays called Art and Life in Aestheticism: De-Humanizing and Re-Humanizing Art, the Artist, and the Aesthetic Receptor. The second part of the title may be a bit of a mouthfull, but it does its job, giving as it does a shout-out to José Ortega y Gasset's 1925 treatise The Dehumanization of Art, which examined with a skeptical (but not a dismissive) eye the emerging emphasis on formalism in the art of the twentieth century. The essays in Kelly's book tackle ideas of formalism and the aesthetic as they intersect with, or eschew, lived experience, the social, and the political. The emphasis of the book is on the aesthetic movement of the late nineteenth century, but the essays reach further back in time, and forward as well, as far as the present day, with a notes in one essay (by, uh, me) on Charles Bernstein, Ron Silliman, and company.

Here's what Kelly came up with when the good people at Palgrave MacMillan had her sum the whole project up in a couple of sentences:

Art for art's sake addresses the relationship between art and life, between the aesthetic and the social, and promotes the former term over the latter one in each instance. Although it has long been argued that aestheticism aims to de-humanize art, this volume seeks to consider the counterclaim that such de-humanization can also lead to re-humanization, to a deepened relationship between the aesthetic sphere and the world at large and between the artistic receptor and his or her human existence.

The book gathers together essays on a surprising range of authors: Baudelaire, Rossetti, Huysmans, Wilde, Nietzsche, André Breton, Nabokov, Adorno, Barthes and many more. Here's the opening of my own contribution, an essay called "The Aesthetic Anxiety: Avant-Garde Poetics, Autonomous Aesthetics, and the Idea of Politics":

If you are personally acquainted with any significant number of poets, you will perhaps not be surprised to find that the thesis of this essay is as follows: poets want to have their cake and eat it too. The particulars of the argument, though, go beyond the intuitive and the obvious, or so I hope. What I want to say is this: since the nineteenth century, poets have faced a dilemma. On the one hand, many poets have felt the allure of the radical freedoms of an entirely autonomous art, an art not in the heteronomous service of any religious function, ideological formation, moral system, cause, or institution, an art that exists for art’s sake alone. On the other hand, poets have faced the anxieties that such autonomy seems, inevitably, to create: fears of losing their readerships, their social roles, and their political utility. Many poets of the twentieth century, especially those affiliated with avant-garde movements, have been haunted by such anxieties, and have sought to assuage them by claiming that a commitment to aesthetic autonomy can, in and of itself, be a form of political action. Such an identification does not bridge the chasm between a belief in autonomous art and a belief in the kind of heteronomous art that serves a cause. Rather, it denies the existence of such a gap, and asserts that the disinterested pursuit of art for its own sake is also, by its very nature, politically efficacious.

Positions of this kind are by their nature fraught with contradictions, and raise many a question. Can withdrawal from political engagement be anything other than quietism? What are the politics of audience, when the art speaks neither to the disempowered classes nor to a significant element of the power elite? Can a political art still be autonomous, or does it bend its craft to a political end? Indeed, the attempt to work through such questions has been the driving force behind many an avant-garde polemic. Despite the difficulty of maintaining the identity of aesthetic autonomy and political utility, though, this dream of the poets has endured for the better part of a century.

Two groups of poets who attempt to identify aesthetic autonomy with the political — the surrealists and the language poets — are of particular interest because of the different forms of politics to which they to link autonomous aesthetics. Starting in the 1920s, the surrealists, under the general guidance of André Breton, sought a link between the radical imaginative freedom of their movement and the project of Communist revolution. Later, beginning in the 1970s, the American language poets sought to identify aesthetic freedom with a kind of negative politics — a politics of critique and resistance, rather than one conducted with a specific revolutionary utopia in mind. Whatever the form of politics, though, the enduring nature of the poet’s anxiety about reconciling aesthetic autonomy and political efficacy indicates that we may have reached a point in the history of poetics in which what I am calling the aesthetic anxiety (that is, the anxiety about the apparent political and social inutility of autonomous art) isn’t so much a passing crisis as it is a lasting condition of poetic production. Whether the solution to this anxiety proposed by the avant-garde poets can survive is, of course, another question, and one to which the answer, increasingly, seems to be “no.”

Langpo fundamentalists will probably want to punch me, but I'm hoping they'll get bored by my turgid academic prose half-way through the essay, and I'll be able to sneak off to my escape while they snore.

Anyway. You can pre-order the book now from Amazon or Barnes and Noble. Shop early! It makes a great gift!