I am, it seems, Extreme 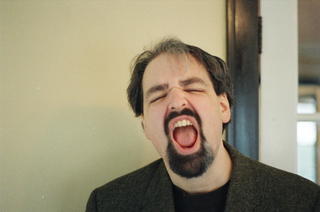 So there I was, surfing around to see what was up in Chicago poetry this month, when I came across chicagopoetry.com, and a surprising reference to myself as first on a list of Chicago's forty most "eX-treme" poets.

What could this possibly mean, you ask? An interesting question! I haven't got an answer, although I feel the weight of the expectation pressing down on me. I mean, I just gave a poetry reading as part of the Rosemary Cowler Book Festival in Lake Forest, and if I'd known I was "eX-treme" I'd have done it from a skateboard, or pehaps while rapelling down a rock face. At the very least I'd have had my hair done up in some kind of purple anime-style do. But, alas, no such extremity was in evidence. The most radical gesture I made was to read my poem about Vermeer after noting that the sterotypical poem by an academic poet begins with the line "Vermeer would have loved these Connecticut woods." I declared myself militantly academic, and may even have raised my right fist ever so slightly in the air, weakly echoing the old salute of the revolutionary POUM of Catalonia.

But think of the company I'm in! At the local grocery store, for example, they've taken to making the cashiers offer you, on the way out, the "extreme deal of the day." Recently this has included deoderant, Cracker Jack, and, if memory serves, some sort of mouthwash.

The true honor of being "eX-treme," though, lies in being made into a creature of one's time. Were I a poet of the sixties, I could perhaps have been part of the "psychedelic 40," and had I flourished in the eighties (when I was too busy pursuing militant hedonism to write many poems) I could have made it as a preppyishly "outstanding" poet. Instead, I find that I embody the zeitgeist of this decade. Now if only they'd start pushing my book at the grocery check-out...

Posted by Archambeau at 2:39 PM